You are here: Home › Uncategorized › Wanton Wednesday: Boxing-up my lingerie addiction
I had a really interesting Wanton Wednesday photo idea, but annoyingly the garment I wanted to wear within the photo is too big. This has prompted me to box up some of my old lingerie, so I can make room for new items. It’s not really what I had planned for today as my body is feeling pretty lifeless due to over exercising yesterday.   Sorting through clothes isn’t something I want to do, but it has to be done as I’ve put it off for months. I think this photo sums up how I feel. My heads pretty fuzzy feeling and my eyes don’t seem to want to focus.

So far this morning I’ve sorted through about half my bra collection and have these ready to box up. It’s hard to believe that any of these bras use to fit me; my bust is basically flat-chested now. 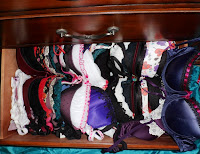 Anyway I decided to have a break and slip into a one size chemise. It’s a little baggy but as it’s pleated I think I can still get away with wearing it.  Frustratingly, my partner didn’t seem too fussed that I had slipped into a pretty chemise… today he has man flu.

It almost feels like I should box this one up too, as it doesn’t seem to be as sexually alluring as I would’ve liked.