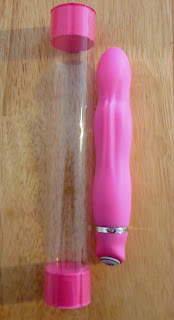 Cleaning the toy is use especially as Dive is waterproof. The silicone does seem to attract dust so it’s best to store it in the plastic tube when not in use.
Overall, I didn’t get along with the Vibe Therapy Dive. For me it’s just too narrow and uncomfortable, with weak vibrations. I feel it might work for some with a different anatomy. It’s an option for those looking for a moderately quiet vibrator with a good motor. It’s still an extremely well made toy and it may work for you.  I have had better experiences with other Vibe Therapy products, it’s just this particular one wasn’t right for me.
You can purchase Vibe Therapy Dive from Sex Shop 365.