You are here: Home › Uncategorized › Toy with me Tuesday Round-up #4

We have finally seen the season transition into autumn in the northern hemisphere. But even bouts of ice cold rain aren’t enough to keep Toy with me Tuesdayphotographers from harvesting the finest images. Whilst some have ventured out in these extreme conditions, others have gathered resources in preparation for hibernation. As you catch up on the latest Toy with me Tuesday news, why not grab a cuppa, and maybe even nibble on a delectable treat, settled comfortably behind your screen inside the warmth of your burrow.
Last week was International Talk Like A Pirate Day, and a few Toy with me Tuesday participants went exploring not only their treasure chests, but also diving into uncharted depths. Beck’s buried her treasure in a beautiful lagoon, in her photo, ‘Under the sea’. The iridescent pearl would lure any scavenging pirate. With the signpost ‘Wet and Wild’ positioned cleverly behind the toy, acting as the ‘X’ marks the spot on the treasure map, it certainly looks very inviting, but I’d be cautious of the sea monster lurking nearby. 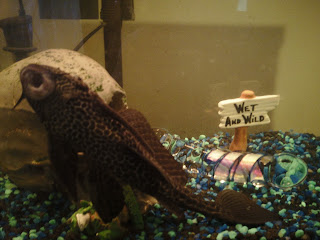 Midnight Boudoir finds a treasure trove of golden doubloons in their Toy with me Tuesday. This makes us wonder what photography props she’ll discover next.  Can you spot the real gem amongst the glimmering gold coins? What would you do if you had to start plundering sex toys and hiding them in sealed treasure chests? 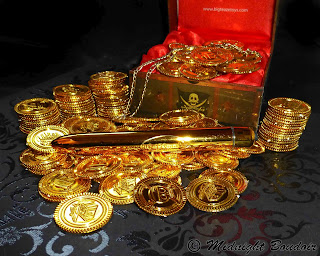 TruePleasures’s post is super kawaii with her photo of a baby kraken, known as Takochu, being dragged back into the sea by another larger sea creature’s tentacle. Not only is this photo cute and imaginative, but she impressively improvises by making a fake beach set. The sand is actually crushed up Cheerios; it took most viewers by surprise that her image wasn’t taken on an actual beach!

Lovehoneybrings modern technology and an old telephone together in their Toy with me Tuesday photo, ‘Receiver of Pleasure’. Everything about this photo shows innovation, from linking these two history-making pieces, to the photographer’s creativity. Both telephones and vibrators have become essential in everyday life; a necessity for any hedonist. 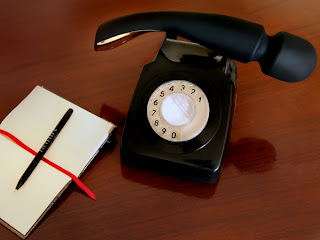 Lastly, we have Penny’s photo of a pussy. For those of you who weren’t aware, many sex toy reviewers have a feline familiar to keep them company as they write-up their testing’s results. Penny’s photo is partly down to good luck, as she happened to catch the kitty off-guard, roaring loudly amidst its slumber. To the side of the shot you will also see a male masturbator – I’ve heard that these can make good, yet often unintended, cat toys. 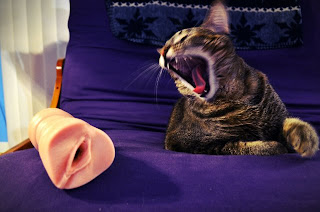 3 Responses to "Toy with me Tuesday Round-up #4"