The device is made from silicone and plastic, meaning the material used to produce it is body safe. In the base you will find the plastic section containing the control buttons and the charging port. There are six buttons in total, the three to the left control the vibrations within the clitoral arms, and the one’s on the right control the vibrations within the g-spot part of the product. I have a few qualms about the buttons, first off they flash an annoying mixture of colours depending on which setting you choose, and secondly, they are a bugger to push particularly considering how many vibration patterns you have to press through to get to the ones you desire. The buttons caused so many issues, that the off buttons stopped functioning after the forth use, which is particularly bad for a rechargeable vibrator.

The shaft of the product is very unusual and only a small section of it is functional. I’m unsure why they had the shaft as long as it is, particularly as I have personally found it has hindered my control over the insertable part of the toy.  The G-spot area of the product is extremely curved with only a small amount of flexibility. The surface area which is aimed at massaging the anterior wall of the vaginal is also textures with raised ribs – I actually found this meant the product caused my body a lot of discomfort when hooking it inside me, even when I had applied a great amount of additional lubrication.

The clitoral legs stimulating arms flare out slightly, and found on each of their tips, you will find a set of raised nodules. The arms are very flexible, and personally didn’t provide enough pressure for my body. The textured stimulating area helped slightly when adding extra sensations to play, however, due to the amount of lubrication needed for the insertable part I found they slipped around too much for my liking – they also were a nightmare to clean. 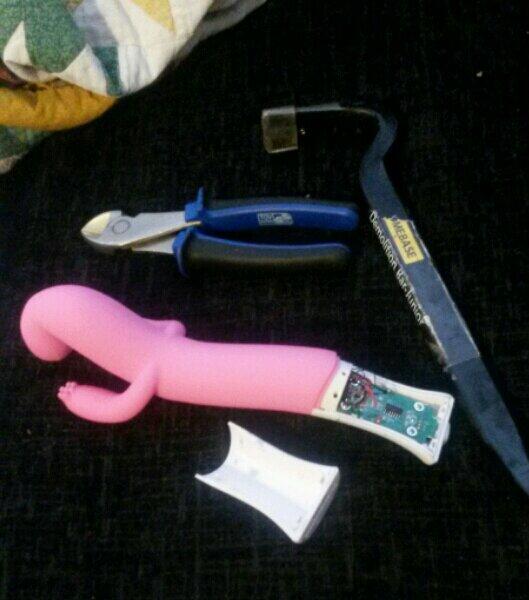 When using the product I found ample amounts of foreplay and lubrication was needed as I hooked the tip of the shaft into my vagina. As the bulbous tip curved round into my vaginal chamber the raised ridges aggravated my body taking me out of my relaxed state needed to have a fully enjoyable wank. Once positioned, the internal part didn’t reach my G-spot, and the extra long handle did not help in positing the product so it sat correctly within my body. After experimenting with the internal shaft vibrations for awhile and finding that they stimulated the incorrect areas for me, I decided to give the clitoral arms /some attention. The clitoral arms I found I had to position over my clitoral legs manually, although this may be because I have very long labia, which could’ve gotten in the way of the products external part sitting how it desired. The nodules rubbed over my vulva and labia and cause some pleasant sensations. However, without vibrations, and lack of pressure, they were enough to get the attention of my clitoral legs. Even once the vibrations were on I found they didn’t really add much extra to the experience.

After using the product for over 30 minutes, I thought I’d combined the toy with some direct clitoral stimulation. Another 15 minutes later and I finally orgasms, but it wasn’t mind blowing, and wasn’t very intense.

Removing the product from my body was harder than many other vibrators due to its hooked tip.

My vagina still felt confused even after using it, and sadly the product fell short every time for me, until it completely failed and broke.

Thank you to Ann Summers for sending me this product for my review.