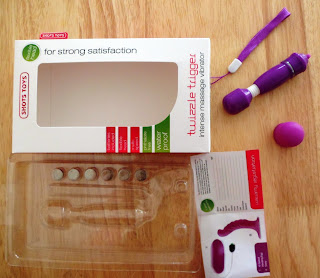 The Twizzle Trigger arrives in a cardboard box with a cut-out front revealing the product. The box is ultramodern in design with its plain white background and blocked out colours. The box states that the head of the toys is flexible and can be bent into which ever position you desire. The description also claims that the toy is waterproof; this is very different to most wands I own, which can only be used during land based activities. The toy is kept in a plastic clamshell packaging; there are also six batteries within the plastic container. The toy comes with nine batteries in total, three of which are already inserted into the toy. I really appreciate toys which come with spare batteries, especially when they are LR44 type. There is also a one year warranty, with a form that must be sent off.
The toy is in a dark purple colour. I actually like this colour compared to the sterile whites and creams you get with most wands. The wand is tiny – it’s only 4 inches in length – but don’t let the size deceive you into thinking this isn’t a powerful toy; it packs a hefty punch. The toy’s head is 3.25 inches in circumference, which is a lot smaller than the standard wand size; this toy really is perfect for those aiming for pin-point clitoral stimulation. The head has a ribbed silicone sleeve which is removable, meaning that you have a choice between silicone textured toy and a smooth abs plastic surface. The head of the toy is only 1 inch in length. The head has a flexible white stem. This has to be the most durable and flexible stem I’ve found on a wand vibrator. At the base there is a twist cap for the battery compartment. The setting button is multi functional, and has a hole for a wrist strap, which is provided. I found the on/off button rather nifty, even though it took me some time to locate. It’s made from very soft material, and is easy to use. Also it isn’t easily triggered. The wrist strap is made from soft material and its design is very similar to what you would find with a camera or USB stick. The wrist strap can be removed easily, which may be convenient if you are a squirter. The toy is waterproof and the seal seems pretty good. Most wands aren’t waterproof, so this really is an advantage.
The wand has 10 vibration settings from pulsation to escalating. All the vibrations are very strong and are focused in the head of the toy. Even though this vibrator isn’t as strong as the Hitachi wand or similar, it’s still more powerful than most bullet vibrators, and even stronger than a lot of standard battery powered insertable vibrators. If there was one main thing I would change about this vibrator, it would be having to scan through all the settings to turn off the vibrator. The first setting is shockingly powerful, so you may want to be prepared by applying lubrication beforehand. The vibrator is fairly noisy but still not as noisy as certain lower quality toys.
When using the toy, orgasm occurs quickly after pressing the trigger. The toy is very powerful and can feel numbing if held too long on a sensitive area. Yes, the toy is weaker than a mains powered wand, but it is more compact, meaning you get more direct stimulation. I have inserted the toy, but feel uncomfortable doing this, due to the removable head and its size. When using the toy with its silicone sleeve the vibrations feel slightly weaker, but still highly effective. The silicone sleeve does cause slightly more friction when rubbed against dry skin than the smooth plastic head.
The toy isn’t overly great for general body massage, as the main shaft doesn’t have as much weight behind it as the Hitachi or similar has. The toy is still a great couple’s toy due to its flexible head. If you enjoy using a bullet for clitoral stimulation during vaginal penetrative sex and couple foreplay, then this toy would be great for you. The head is extremely flexible, while still delivering strong vibrations.
The toy is very easy to clean, though you may wish to remove the silicone sleeve while washing the toy, as you don’t want to get moisture trapped inside it. The wrist strap is also easily hand washed.
Overall, I really like this toy, but I wish it wasn’t battery powered. The batteries do seem to last fairly long, and you get a nice back up supply, but still I imagine I will be getting frustrated once my power supply depletes. This toy would be great for those looking for a wand style toy and for those new to high powered vibrations. It’s a cheap alternative to a mains powered wand, and is very portable.
You buy this toy from sextoys.co.uk.