The Aveline arrives in a black box which is attractive in appearance, making it presentable enough to store the toy in, or give as a gift. Inside the box you will find the toy slotted within a protective foam rest. I did find it mildly difficult to remove Aveline from its resting place, so be careful when doing so.  Underneath the toy and the foam rest you will find a small informational booklet with care instructions. The booklet states that the method used to process the ceramic toy ensures that the ceramic is safer and stronger than standard pottery, and shouldn’t break or shatter. The toy comes with a velvet drawstring storage bag. I personally found the velvet a little scratchy, but the bag is still very functional and doesn’t often come open accidentally.
The dildo is made from beautifully sculpted ceramic which feels divine to touch. The ceramic is glazed with a glossy coating and doesn’t cause friction when rubbed again dry skin. The toy has a flower pattern etched into one side; this provides moderate texture when touched, but causes little or no additional stimulation during penetration. The pattern is beautiful and flows attractively along the toys curved shaft – it’s somewhat relaxing to look at. Unlike some toys I doubt the pattern will wear away easily. I have scratched at the pattern and glaze, and so far it hasn’t chipped or marked at all. At the base of the toy is a blue plastic stopper preventing dirt and moisture from getting inside. Most ceramic toys are hollow inside, therefore they are incredibly light to handle. The stop can also act as a handle, which is particularly helpful when the shaft becomes slippery. The shaft of the toy is longer than I expected at 8.5 inches in length. The toys circumference is 4.5 inches, which isn’t overly large, and thanks to its slightly tapered tip and glossy surface, I doubt many will experience difficulty when inserting the toy. The toy has several curves formed into the shaft; the top curve is the largest and most prominent as it’s designed to hit the G-spot. The curves towards the base are unlikely to be inserted during penetration, but act perfectly as a handle. 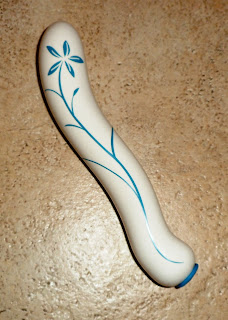 Cleaning the toy is simple as it can be cleaned with warm water and your standard antibacterial wash. When cleaning the Aveline, make sure to pay a little extra attention to cleaning around the plastic stopper in the base, as dirt can get trapped round it. If the stopper ever becomes damaged and allows liquid to get inside the toy, make sure you let the toy air dry before putting it away.
Aveline can easily be placed under running warm water or cold water to adjust its temperature. The ceramic’s temperature changes quickly; I would say it alters more rapidly than a glass toy.  Once the toy adjusts to its new temperature, it retains it for a reasonable amount of time.
As the base of the toy is relatively easy to grip I think this would be a great couple’s toy to use during foreplay. As it is made from rigid ceramic I would suggest you be gentle while thrusting with the toy, so you don’t cause bruising internally to the cervix.
Overall, I really like the Aveline. It truly is a beautiful toy and I’m glad to have it within my collection finally, after much searching. I feel that even though I didn’t experience an amazing orgasm when using it the intended way, I feel it would still be an excellent G-spot dildo for others. It still is a very pleasurable toy to use, as well as to look at.

4 Responses to "The Lovemoiselle Aveline"