The Curve arrives in a rather funky box, printed with several images of the products outlined shape. The front of box is held in place with a magnetic latch holding several cardboard flaps, slowly revealing the product displayed behind a clear plastic window.  Within the box you will find the toy, resting under the toy is a removable piece of card which is keeping some instruction and promotional material hidden, as well as a sachet of lubricant. The instruction booklet doesn’t really have much information about the product, mainly stating that the toy is designed for G-spot stimulation. The promotional booklet lists almost all the FunFactory range. The lubricant provided is safe to use with your new toy, and due to the surface textures of the toy I would recommend keeping it handy. 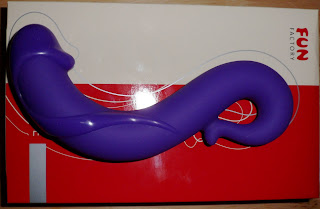 The toy is approximately 8 inches in length with roughly 7 inches of insertable curved shaft. At the base of the toy there is a looped handle which can comfortably fit two to three fingers through. At the tip of the toy there is a realistic penis style head which is made from glossed silicone. The top of the toys head has a raised bump which may cause slight discomfort during insertion and removal of the toy.   Down either side of the toy there are wave-like ridges, these are also made from glossed silicone. The main structure of the toy is made from matte silicone. Both the glossed silicone and matte silicone cause friction when rubbed against dry skin – I would recommend using water based lubricant with this toy. The toy can cause so much friction when rubbed; it can produce a static shock effect. The toy is 5 inches in circumference at its widest point. When viewing the toy online I expected the silicone to be rather firm, unfortunately this isn’t the case. The silicone is easily flexed, meaning that the curve can be completely straightened and even bent backwards. The toys material also has a fair amount of bounce to it; this might not be so good if you need firmer G-spot stimulation.

When using the FunFactory Curve, additional lubrication and foreplay was required. I did try and insert the Curve without additional lubrication, but found the raise head caused discomfort. When the toy is inserted, it curves towards the G-spot perfectly. As the shaft can easily be manipulated, I feel that this toy is likely to accommodate most people’s G-spot. You would think that is a good thing, but the toy does have some minor problems when stimulating the G-spot. Even though the handle is very comfortable and seems like it would be easy to use, the toy isn’t very accepting when trying to apply different motions. I found that because the silicone is very flexible that rocking and deep thrusting motions were incredibly difficult. I was able to softly bounce the head of the toy onto my g-spot, this did lead to a great orgasm, but it left my wrist feeling exhausted. I found that when trying to apply deeper and more vigorous thrusts, the silicone was not only too supple to keep up a rhythm, the head of the toy felt uncomfortable as the raised ridge rubbed against my vaginal wall. This is still a great G-spot toy and when I eventually reached orgasm, the sensations felt were very intense. I’m also slightly disappointed that I was unable to feel the raised wave-like textures along the side of the dildo. When removing the toy it did cause moderate discomfort, as the head popped out of my vaginal opening.
I did read that you can use the toy for clitoral stimulation. I have tried rubbing the raise ridge, which can be found on the head of toy, against my clitoris, but found that it produced very little stimulation. I have also tried rubbing the raised tip of the handle onto my clitoris; this produced more direct stimulation to my clitoris, but didn’t cause a clitoral orgasm. Personally I feel that the sensations produced by this toy when used for clitoral stimulation, aren’t overly special.
Cleaning the toy is fairly easy, it can be washed with your standard antibacterial wash and warm water. I’ve known a few people put this dildo in the dishwasher on the top shelf with no problem. It does attract dust, so you may want to keep it in the storage box.
Overall, this is still a good G-spot dildo as long as you are willing to put some effort in to gain the desired results. I feel that I would’ve preferred this toy more, if the silicone wasn’t as flexible. This is a good G-spot dildo especially if you are new to G-spot stimulation; I think this toy is more likely to find the G-spot than others. The quality of the toy is superb, and I doubt everyone will experience the same problems as I did.
You can purchase the FunFactory Curve at: The Boudoir