I recently purchased three of the Sliquid Swirl flavoured lubricants: Strawberry & Pomegranate, Blue Raspberry, and Cherry Vanilla. In the past I have experienced problems with other flavoured lubricants for the following reasons:
Sliquid had already won me over before the lubricants arrived at my door. This is because they clearly answered all my problems without me having to perform in-depth searches beforehand. The Sliquid swirl range is all vegan friendly, glycerine free, and is paraben free.  These lubricants seemed perfect, and I was over the moon that both my partner and I could finally try a flavoured lubricant without worrying.
The three Sliquid Swirl lubricants I purchased all have a similar consistency. They are at the thinner end of lubricant scale, and do feel rather slippery when applied to skin. Even though they are thinner than some lubricants they still seem to stay put once applied, and are easily blended with natural moister. If you want to make these lubricants thicker you can easily mix them with other lubricants. I also found that even though the aspartame content is minimal, it is still ever so slightly noticeable in these lubricants. It isn’t as bad as a sugary syrup taste left by some, or as bad as others lubes that over compensate with going overboard with sweetener to make up the lack of sugar. Also all the lubricants were gently absorbed into the skin, without leaving any tackiness.
All the bottles are sealed with a piece of foil coated plastic; this not only keeps the lubricant fresh but reassures you that your product hasn’t been tampered with.  I did experience a little trouble when removing the protective seal on each bottle.
Both my partner and I have tried each lubricant out orally. When the lubricants were applied to my genitals, my partner found that the flavours did not take away my natural taste. He also found that only a small amount was needed and that it easily maintained the flavouring from the lubricant. He did find that over long periods of time the lubricant flavour would fade slight and leave a soft sweet taste within his mouth. When I applied the lubricants to my partner I found that more was needed during fellatio, this might be because the penis doesn’t really have natural lubricant to blend with the lube. I did find the taste pleasant and was still able to distinguish the flavours of my partners flesh between the Swirl lubricants.
The scents of the lubricants are all satisfying. Not too overpowering; strong enough for you to appreciate the flavour before you make contact with your lips. 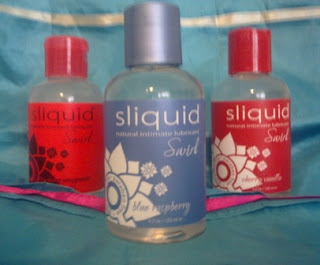 The Cherry Vanilla flavour from our experience tastes better than other cherry lubricants we have tried. The Cherry isn’t sweetly over powering and has a slight bitterness; the bitterness is softly taken away by the vanilla. When the flavour starts to fade you are left with more of the vanilla flavour in your mouth, the cherry mostly dissipates. To me the combination of the cherry and vanilla oddly reminds me of amaretto, I have no idea why because this lubricant doesn’t seem to contain almonds.
Ingredients: Purified Water, Plant Cellulose (from cotton), Cyamapsis (Guar Conditioners), Cherry & Vanilla Flavouring, Aspartame, Potassium Sorbate, Citric Acid.
Strawberry & pomegranate flavour, we were both excited to try this flavour as pomegranate is one of our favourite fruits.  This lubricant mostly tastes of strawberries; there is only a slight watery pomegranate flavour. The strawberry flavouring tastes similar to strawberries that have been freshly picked at the right time of the year. Similar to those big fat strawberries you bite into and find a softly sweet centre. Even though the pomegranate flavour isn’t as powerful as we would have hoped we still liked this lubricant.
Ingredients: Purified Water, Plant Cellulose (from cotton), Cyamapsis (Guar Conditioners), Strawberry & Pomegranate Flavouring, Aspartame, Potassium Sorbate, Citric Acid.
The Blue Raspberry flavour reminds me of blueberries with a hint of raspberry juiciness. This one reminds me of the blue Panda Pop, and blueberry flavoured Ribena. There is a slight natural fruit flavour to it. This one has to be our favourite as it doesn’t have the same overpowering element the other two seemed to have.
Ingredients: Purified Water, Plant Cellulose (from cotton), Cyamapsis (Guar Conditioners), Blueberry & Raspberry Flavouring, Aspartame, Potassium Sorbate, Citric Acid.
Overall, these lubricants are great especially when compared to other flavoured lubes on the market. They are just the right consistency, flavour, and fragrance. I know I defiantly will be purchasing another of the blue raspberry bottles in the future, though I don’t expect this to be soon as these bottles do appear to last ages. Even though there are larger and cheaper bottles of flavoured lubricant available, I feel that these bottles of Sliquid will last longer as you need to use less. They are really worth the price, and although there are cheaper alternatives I feel you can’t go wrong with Sliquid.