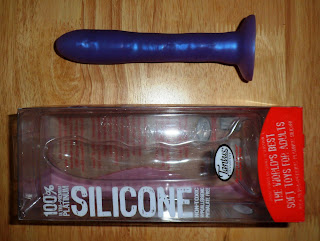 The toy arrives in a clear plastic box with red and white text scattered on it. On the box it states that the product is made from the highest quality hypoallergenic silicone. The box claims that Tantus toys should last a lifetime and need minimal care. The toy is resting in a clamshell insert, which is easily removed from the box.  The toy itself is 6.5 inches in length and 4 inches in circumference at its widest point. The head of the toy is the widest part, and as you follow the waved ridges down towards the base the girth gradually gets smaller. Each wave’s peak is approximately 1.5 inches apart from one another. The tip of the toy is slightly flat compared to some tapered tipped dildos. The toy has a slight curve to it, it’s extremely flexible and can be bent almost in half without causing damage. Even though the toys shaft is flexible the silicone still has a firm yet soft feel to it. The toy has a flat base which is designed to fit o-rings which are 1.25 inches in circumference. The base has a slight suction to it, and is easy to hold. The toy is a beautiful mix of metallic purples; it almost appears as if the different purples have been tie-dyed into the silicone. The box says that this toy should be scent free, but upon removing it from the packaging I found that it had an over powering chemical smell. After several washes and leaving it out to air the smell has almost vanished, but still lingering ever so slightly. I’ve asked a few other people who own a Tantus Charmer and they don’t seem to have the same problem with the smell, they say theirs is odourless.  When holding the toy horizontally the shaft does drop slightly, making me wonder how well it will stay positioned in a harness. You may want a dildo which is made slightly firmer, when using it for anal stimulation.
When using the toy I found that even though the tip of the toy is slightly flattened it was still fairly easy to insert. The waves are rather prominent; if you are overly sensitive to textures I would recommend using additional water based lubricant. I was slightly worried that I wouldn’t benefit from the added sensations of the waves due to how thin the shaft is, but I was wrong, each wave could be felt strongly when rubbing against the front of my vaginal wall. The waves on the toy are a lot better than I had anticipated, and felt more pleasurable than the standard vein-like ridges commonly found on other silicone toys. The head of the toy did find my g-spot and gently bounced off it producing a gradual but strong orgasm.  Even though the ridges appear to be rather jagged, they feel fairly gentle when rubbing against the vaginal wall and opening, while at the same time producing  more noticeable sensations than a gentler waved dildo.  As the shaft of the toy is very flexible it can be difficult to use when applying firmer and forceful thrusts. This toy is perfect for those who like gently stimulation on the g-spot, without the addition of too much girth.