The cane arrived with only a tag wrapped around its shaft saying ‘Spartacus’. The tag is secured in place via an elastic band; you may wish to keep this elastic band handy, for reasons I’ll explain later. The cane is sold as being a minimum of 36 inches in length, and the one I received is slightly longer, measuring at 37.5 inches long. The top of the cane has been heat treated and manipulated to hook round. You will see visible scorch marks shadowing the underside of the crook, which also has the benefit of offering a splinter-free underside. The cane’s bottom has been finished with a metal tip; I’m uncertain as to what type of metal has been used but it is showing some signs of rusting. The metal tip is conical, and isn’t joined flush with the bamboo, meaning that it juts out leaving a sharp edge. The cane works well as a walking stick but is more suited for tall people – when using it as an actual walking stick I had to wear heels to comfortably swing it and strike the pavement. When the cane arrived the bamboo felt a little dry and had a few splits in the wood. This is where the elastic band comes in handy; place the elastic band tightly over the hook, and then either stand the tip of the cane in a small pot of water or rub a damp cloth over the toy’s surface. This will help prevent your cane from becoming too brittle and breaking. The only problem with this is that the coating on the bamboo will tarnish slightly. 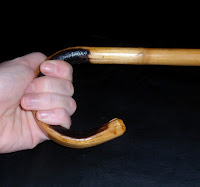 During use the cane’s hook gave excellent control over my strikes. As the cane swooped through the air it produced a satisfying noise and upon impact it made a resonating thwack, echoed throughout the bamboo’s hollow tunnelling. The metal tip on the cane not being fitted flush limits the useable surface area of the cane. Normally when using similar impact devices, the main bite is from the tip of the toy hitting the submissive’s flesh. Instead I’ve had to focus the centre of the cane when impacting my lover’s body. It still offers excellent sensations, but they aren’t as intense as I want the cane to achieve, and the marks left are still strong but not the crimsoned welts I crave to see upon a lover’s body. This isn’t what you’d normally expect when using a cane, as canes are classed as one of the more extreme impact devices.
I believe the cane works best as a role play prop, and also as a sensory play device due to the noise of it swooping through the air in an intimidating manner, and its impact thud. 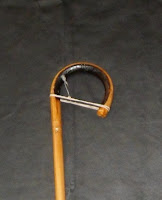 Remember to keep your cane in top condition by either soaking the tip in a small amount of water every few months, or using a damp cloth over its surface. Make sure to secure an elastic band around the crook of the toy, as whilst moistening the device can keep the wood in better condition, it also encourages the hook to straighten. The cane will stain with sweat and blood (depending on how brutally you use the device). When storing the cane keep it away from overly hot areas, such as near heaters, as this will dry the wood out and warp its shape. 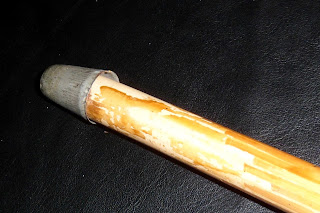 Overall, the Spartacus Bamboo Cane is an ok impact device; I just wish the tip of the cane was joined to the bottom of the bamboo stick better. It leaves too much of a sharp edge, meaning that it’s best to avoid using the tip of the device for impact. As a role play device it’s excellent for the price.
Thank you to Voluptasse for sending me this impact device for my review. You can find out more about the Spartacus Walking Bamboo Cane here.