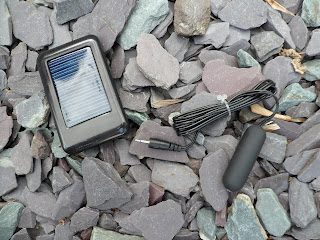 The toy arrives in a cardboard box which is made from recycled fibres. The box has that eco-friendly outdoors-life feel to it, and can be recycled. On the box there is an image of the vibrator and power pack. On the back there is a diagram of the product with labels for specific features of the toy – this diagram is essentially the instructions for the toy. The diagram shows you that there is an LED light which glows blue while the power pack is charging, and next to this is a plug-in jack point. The toy is controlled by a sliding switch, which can be a little stiff to use at times.
The bullet is 2 inches in length and just over 2 inches in circumference. At the tip of the toy there is a little LED light which lights up when the toy is switched on. The LED light gets brighter the stronger the vibration setting is. When the battery pack’s power starts to run out the LED will start to fade. Some people may be worried about having a glass LED pressed against their intimate areas, but there really isn’t anything to be concerned about. I’ve forcefully pushed the LED into the bullet and it doesn’t budge. I’ve also hit it into a hard surface and it doesn’t even have a scratch on it. Leading out of the back of the bullet is a power cord that hooks up to the main power pack; the cord is approximately 34 inches in length. The bullet hooks up to the power pack and instantly works even when first removed from the box.
The power pack is very light, and its main plastic body can become scratched easily. I feel the power pack would benefit from a storage pouch, but it can happily fit into a phone pouch. On the back of the power pack you will find ‘California Exotic Novelties’, although this is barely noticeable which makes the power pack fairly inconspicuous to prying eyes. When charging the toy you don’t have to have the bullet connected, so it can easily be left out. It also doesn’t need to be charged in direct sunlight and so can be left on your bedside table – it just might take slightly longer than if it was placed on the windowsill.
The bullet is extremely powerful, more powerful than bullets I own that are powered with N batteries or LR types. The bullet is so powerful you can feel the vibrations travel down the power cord. When using the toy the power pack needs to be connected to the bullet. The power pack is relatively easy to hold or rest on a surface. If you are overly sensitive to strong vibrations this bullet won’t be for you. When using the bullet I found that a small of lubricant was needed to make the vibrations more pleasurable, because otherwise I would feel a tingly numbing sensation rather than an orgasmic sensation. Now even though this bullet is stronger than a lot of other bullets, I enjoyed the vibrations more than I expected – I just couldn’t get enough of this toy. The bullet produces clitoral orgasm very quickly. The bullet is rather noisy, but considering the power it packs I feel this is to be expected. If I was to change one thing about this product it would be the slide control. The slide control can feel stiff at times, making it hard to adjust the vibration intensity, especially at those crucial moments. Also, as you have to put some effort into changing the settings, you can accidentally turn it off. 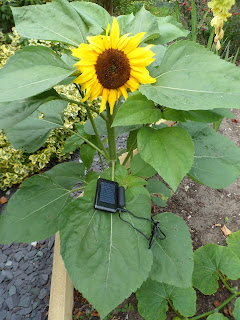 Do you want to know something nifty about this product? The power pack can be used with other vibrators that have the same type of jack plug. I would recommend caution when using it on a different toy, as it might not work for some. I tested Penthouse Ball Bangers Vibrating Love Balls with the solar panel power pack, and was not only happy to find that it worked, but also that it turned the vibrating balls into an amazingly powerful toy, at least twice as strong than when powered through the AA battery powered controller.
The Solar Bullet also fits inside other bullet sleeves and cock rings, meaning that you no longer have to rely on the battery powered bullets they originally came with, as long as you don’t mind the addition of the power cord and control pack.
Cleaning the bullet is easy as it can be cleaned with your standard antibacterial wash.  I would avoid getting the solar panel wet, and recommend only wiping it down with a damp cloth. I’ve had a few solar powered items before, and when water gets into the solar panel they don’t charge as effectively ever again.
Overall, I really like the Solar Bullet, and might pick up another one just because it’s so handy. The vibrations are strong, and I love the way the power pack is able to power some of my other toys, while also making them produce stronger vibrations. I also love the way it’s instantly ready to use, unlike some rechargeable toys, but remember that the longer you leave it to charge, the better quality vibrations you will receive.
You can currently purchase this from here.

One Response to "Solar Bullet"