For most people, erotica and sex toys work in conjunction with each other. Many settle down with a good bit of smut and a trusty sex toy beside them. Others may even read a raunchy story with their partner, before experimenting with a sensual product together. Not only do we bring sex toys and erotica together in our own way, but the authors bring new life to sex toy play, introducing toys to their characters. When reading these excerpts we may find new and adventurous ways to experiment with our own toys – we’re able to bring the realms of fantasy into pleasurable reality. 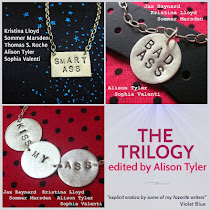 For some reason, all that ass play worked for the auburn-haired beauty. Her pussy contracted the moment she began to touch the buttery skin of his hole. She didn’t know why she loved to finger his backdoor—maybe it was simply the fact that he craved the attention so much—but after a few weeks, she could almost come solely from finger-fucking Carey’s ass.
In fact, late at night, when she was alone in bed, this is what she fantasized about. Not just touching him, but licking him, really getting up in there and tonguing his pink anus. She thought about spreading his cheeks so wide that his pucker parted, thought about driving her tongue hard inside him. In the dim haze of the bedroom, with her Venetians drawn and her satin teddy up, she could confess to herself all of her own desires.
One fantasy involved Sarah, all dolled up like a nurse: crisp white dress, white rubber-soled shoes, glossy hair up in one of those classic peaked hats. In this scene, Carey was facedown on a paper-covered table. Sarah dipped a thermometer in Vaseline and then spread his cheeks open with two fingers. While he trembled, she slid the tool into Carey’s asshole. Even in fantasy, she wished the thermometer was thicker, like a dildo. She imagined how she’d feel staring down at his pale, perfect buttocks. They were rounded and firm—lovely to look at, to stroke. She thought of telling him that if his temperature were normal, she’d be heating up his bottom for him with a hard, wood paddle. The fact that this scenario made her drippy-wet was a cause of mild shame, but that didn’t stop Sarah from pushing forward. Pushing on.
The next fantasy took things up a notch. See, what she really wanted was to fuck him. She’d never done that before. Never had the opportunity to purchase a harness and cock, buckle the straps, present a hard-on with a power and will that was her own.
As she glided her fingertips over her clit, she thought about drizzling on the lube, bending six-foot Carey over the bed, and making him beg her to take him. Would he whimper like a little slut when she drove in hard? Would he cry into his down-filled pillow? Sarah—lost in the clenching climax that flooded her each and every time she had this x-rated fantasy—longed to find out.
Still she couldn’t shake the sensation that he didn’t want to date her. He only wanted to do her. At first, she accepted this fact. Why? Because he was buttoned-up on the outside, while possessing this inner kink that spun her inner controls.
Ultimately, she did want more. She wanted him to take her out somewhere. To the movies. To dinner. She wasn’t thinking Broadway show. She’d have been happy with Barry’s Blue Plate Special. Carey acted as if his role as her supervisor was making him cautious. But Sarah was starting to think it was the fact that she liked crossing her pointer over her middle finger and corkscrew fucking his tight opening until he shot his load all over her comforter. She couldn’t bear the thought of becoming some ass-whore he kept in the closet. She’d rather be his ass-whole—post-climax, she wanted to be able to go grab a bite of pie.
Every time she considered stopping the affair, he’d come through with a well-timed gesture. A carnation on her desk. (Was she the one woman on the planet who had a soft spot for pink carnations?) A bar of good, old-fashioned Hershey’s slipped into her purse. (Was she the only girl on the block who didn’t like gourmet extra-dark?) Nothing incriminating, mind you—no notes, no voice mails that could have gotten him in trouble. Yet enough of an offering to let her know he liked her. Back she’d be, on her knees, his cock in her mouth and her finger stuffed up his ass.
She knew what this did to him. From the moment they took off their clothes, he was ass-ready. He would arch, or shift, or slide in some way that would let her know he wanted her to touch him. There. Sarah could almost hear his body begging: Touch my asshole. Stroke me. Part my cheeks and peep inside. Spread me. Finger me. Do those dirty things that will make me come for you.
It was a good thing Sarah could read his body language. He never said a word about his ass with his mouth.
When she slid three fingers inside him, praising her boy for letting her stretch him so wide, he came in seconds. He was demolished when she leaned over and said, “Next time, it’s going to be a cock. I’m sorry, baby. But that’s the way it’s got to be.”
He didn’t say a word. Not yes, but not no. She smiled.
He wanted her to fuck him.
Guess what? She could do that.

Find it on Amazon here.