The Rocks-Off RO-150mm Slimline bullet is a slender tapered-tip bullet based on the renowned RO-80mm. The RO-150mm not only offers additional vibration modes, but its extra length makes handling the device less fiddly, and ensures that the vibrations also interfere less with the user’s grip. The RO-150mm’s length is advantageous when using with a lover as it offers more fluid control. It also means you’re less likely to impede your own movements when using toys in juxtaposition. This bullet is also perfect for those who prefer slender girth toys for insertion.
The RO-150mm arrives in a black canvas textured box, with a plastic window on its lid revealing the bullet. Embossed in glimmering golden letters, matching the bullet itself, you will find the product’s name and logo. On the bottom of the box is a sticker highlighting key elements of the toy, and an instructional diagram on how to insert the batteries. The RO-150mm features 5 vibration modes and is suitable for aquatic submersion. The bullet takes two N batteries, which are included. Lifting the box’s hinged lid, you are presented with the svelte, glossy golden bullet, resting in a velvet-coated plastic cradle. Underneath this plastic insert you will find a miniature Rocks-Off catalogue, and a pamphlet with further information about battery insertion. 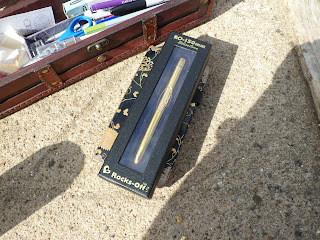 The bullet is made from golden metallicised plastic, which has a glossy friction-free surface. From a distance the bullet resembles a ballpoint pen. At the tip of the bullet there is a slight manufacturing dimple; this is less pronounced than on the RO-80mm, as the RO-150mm’s tip is slightly more rounded. I found this actually made the product more enjoyable compared to the RO-80mm, as although it provided fractionally less direct stimulation, the RO-150mm’s surface area was more pleasurable to use when gliding it over my most delicate parts. The bullet’s shaft is 5.75 inches in length, with just over 2 inches in circumference. The tip tapers to a rounded point for comfort.  Around a third of the way down the shaft you will find the product’s name and logo embedded into the casing – this offers an easy to grip area when the product is lubricated. At the base is the battery cap with a single silicone push-button. The battery cap unscrews anti-clockwise; upon purchase the batteries have a piece of paper blocking them from the connectors. Remove this piece of paper and screw the cap back into position. Do not remove the piece of plastic wrapped around the batteries, as this will inhibit the product’s functionality. As long as you make sure the battery cap and main body are connected tightly, the washer between the two will offer a waterproof seal.
The bullet has five vibration settings; cycling through them is merely a matter of pressing the push-button control. There are two single speed modes, one of medium strength, and the other on a par with the RO-80mm, emitting moderately strong vibrations. The other three settings are pulsation modes, pulsing the higher intensity vibration at different speeds. The first starts with slow pulses, the next offers a more rapid succession of vibrations, and the third speedily pulsates. Out of the 5 modes, the two I enjoyed most were the moderately high single speed vibration and the second pulsation mode. The vibrator is almost completely silent – possibly quieter than the RO-80mm. To turn the vibrator off, hold down the push-button for a few seconds. 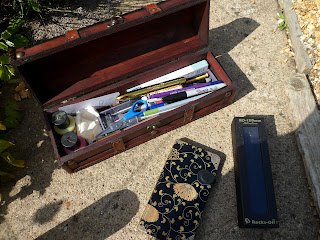 During use I found that I needed a small amount of additional lubrication to optimise enjoyment. When used for clitoral stimulation, I found that the extended shaft offered better control than the RO-80mm, and other smaller bullets. The lightweight bullet glided over my lubricated skin divinely, causing hardly any wrist locking or arm cramping – the bullet weighs a total of 41g with both batteries inserted. As the tip is more rounded than on the RO-80mm, the vibrations felt less intense, but because of its rounded shape I was able to enjoy using the bullet more, as the tip wasn’t as scratchy as on the RO-80mm. The vibrations travelled down to the tip relatively well. You can hardly feel the vibrations when holding the toy close to the button end either. The toy did take a little bit of time to instigate climax, but once reached it was enjoyable, and the bluntness of the tip meant I was able to continue use even after my body had become highly sensitive from the excitement. I do have one main qualm with the bullet, and that’s the push-button. It requires a little extra force to operate than I would’ve liked, especially when trying to fumble it with lubricated hands. 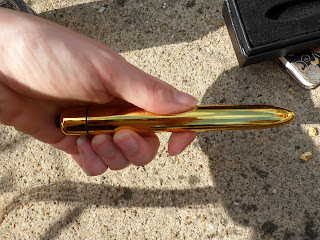 Due to the shaft being longer than a standard bullet, the toy can be used for vaginal insertion. However, I found the shape of the toy ineffective for anything other than foreplay, and wasn’t able to angle the tip onto my G-spot. This toy would still be a great option for those who prefer slender girth vibrators, and aren’t fussed about G-spot stimulation.
The bullet is easy to clean, requiring only mild attention to the engraved stamp and dimple found on the main shaft. Thanks to its waterproof nature and glossy plastic, you can either wash it in water with your standard antibacterial wash, or simply wipe down with a damp cloth.
Overall, the RO-150mm bullet by Rocks Off is a decent vibrator. Its extra length offers better control compared to smaller bullets. The slightly rounded tapered tip is a huge improvement when compared with the tip found on the RO-80mm. if you liked the strength of the RO-80mm, but found the manufacturing dimple an unwelcome irritation, then the RO-150mm is an option worth considering. I also like the discreet appearance of the RO-150mm, although its innocuous chunky ballpoint pen facade will crumble upon closer inspection.
Thank you to Rocks-Off for sending me this vibrator for my review. You can find out more about the product here.