The Tenga Aero Cobalt Ring is made up of a silicone and TPR sleeve that velvety smooth. The case is glossy white plastic with a dial that can be turned to increase or decrease the intensity of sensations. 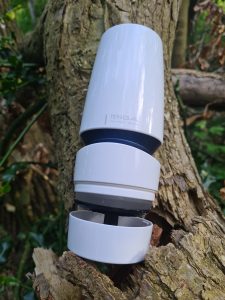 The Experience: You just knew he had experiences with sex toys when he got the lubricant ready – good lad. Promptly at the ready, he lubed the Tenga device up and was eager to slip right into testing. He slowly edged his way to orgasm and I witnessed groans and the sound of queefing coming from the sex toy as he thrusted it over his shaft. He obviously wanted to draw out the experience as long as possible before orgasm and ejaculation. 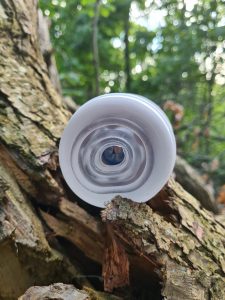 His First Time: He was sooo nervous but wanted to tick this off his bucket list I offered a helping hand. I introduced him to some lubricant first as he’d never even encountered it in sexual play before (I sent him on his way with a bottle for his wife and told him to say he got it from botos and thought it’d be fun). Once I managed to get Rogers, well “roger” hard, I held the Tenga sex toy at the ready for him. It took him a moment to get it in, but once there I moved it over his penis slowly. After checking in on him a few times, we were ready to experiment with twisting the ring to enhance the experience. When using the toy on another I found the ring a little large and slippery to twist at times, but we got there. I was proud of Roger’s first time, even though he almost aborted the trial a few times from nervousness, we got there and he reached peak orgasm. 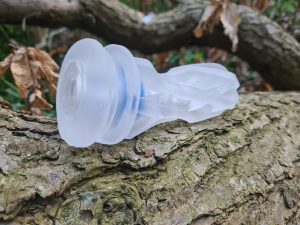 A Long Afternoon with Tenga: It wasn’t just Tenga having a piece of the action when Ben took to testing the sex toy. Ben had a wand vibrator plugged into one side and me to the other. This moment wasn’t just about him and completely different to what one may consider as a casual hook-up style session as he wanted us both to experience pleasure. Hands took lead at first as we explored each other’s bodies and massaged various areas. Fingers dipped in and out of me and then my wetness was rubbed onto his shaft. We took our time, and when we both couldn’t hold back the sex toys came into play. He placed the wand between my thighs, and I positioned the Tenga device over his penis. Sometimes we’d switch roles on who was holding what, and at times I teased him further by pressing the wand onto his perineum. When I got closer to orgasm, he sped up thrusting the Tenga toy. I think we orgasmed together, all I recall was him collapsing over me in a hazy state of hedonism.

One plus I witnessed is that it doesn’t sound like a rusty hamster wheel like some suction masturbators I’ve helped test. The Aero Cobalt Ring does make some sounds but it sounds closer to fapping or queefing when it does.

The biggest thing I took away from testing this sex toy with others was that men still need to learn to take responsibility and learn to clean sex toys correctly.

The easiest way to clean the Tenga Aero Cobalt Ring is the turn the silicone sleeve inside out and wash with warm soapy water. Once washed you can slip it over the incorporated drainer that resides in the lid and allow it to dry.

*names have been changed, sorry no John Smith this time around.

Thank you to Tenga for sending me this masturbator for my review.