You are here: Home › Review › Review of Animal by Sara Pascoe

Twitter is an amazing place to interact with sex positive people who are well informed about sex education, sex history, sex science, sex writing, and more. There was one category I hadn’t really thought about much in the past, and that is sex facts and comedy. I recall pretty much every comedy that included the subject of sex whilst I was growing up to be sexiest takes on it, often echoing and joking about the negative sides of sex rather than the positives, but then I found Sara Pascoe on twitter. Sara was offering a few copies of her book “Animal” for free, so I took a chance and asked for one and she was awesome enough to send me a copy – Thank you. 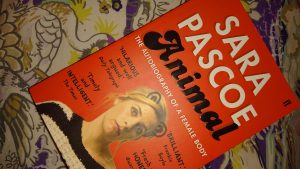 When the book arrived, I was really uncertain about it. I own a lot of sex related books, they regularly try and kill me by toppling on me on my way to the bathroom in the middle of the night, as I simply do not have library yet (and yes, I know you all have libraries). However, I don’t have a sex book written by a comedian, some may have a witty line here or there, but most are written as guides, scientific or historical resources on human sexuality, or sex fact books. Sara Pascoe’s book “Animal” combines comedy, with sex and relationship studies, and it really surprised me how much I enjoyed reading it. Moreover, I found I learned things I did not expect I would from her book that other resources had missed before.

Some of the studies Sara entertained throughout the book weren’t new to me, but with adding humour to them, I could understand than better than some of the overly scientific takes I had read of them in the past. I had moments the blank spaces that connected these sex facts to reality were finally fulfilled, and I felt as if I had a brain orgasm or epiphany of sorts, as the universe seemed as if it made a bit more sense finally.

This is probably one of those books I should have been handed as a teen, instead of being put through the sex education videos on how painful childbirth is, and the colours of STIs all being puss green – really our sex education was terrifically poor. Everything’s covered on from why we may have crushes and fall head over heels for someone to body imagine and consent. There’s also something about Sara’s book too, it has the feel to it that I am reading one of those really great fictional books you’d get as a kid where you can just picture the conversations and voices, I know adult aimed fiction can do this too, but seriously many kids authors did it better when it came to making it fun. Yet, she’s talking about non-fiction, it’s such a refreshing take on it all and gets you really excited. Your heart and brain both shout and cheer you on to keep you reading as you really want to know what’s next in the book.

If you have a teenager, get them this book, as it’ll save them so many worries as they explore their sexuality and bodies. If you still have questions that haven’t been answered, then get this book, it’s seriously funny and engaging. When I say I really like this book, I seriously mean it. It gives me an awesome endorphin buzz as I say this, as a writing style on sex and female body hasn’t gotten me these excited and feel-good tingles in a while, and I’m left wanting more of her work and I hope she never stops writing about sex advice and comedy together.