When magnetic panty vibes first popped onto the market they reminded me of the security tags you find on clothing when shopping in a store. It’s a clever idea, and I bet there’s a fun story behind how this idea was later developed into a functional sex toy.

Do you want to know what excited me most about magnetic knicker vibrators? Trust me, it’s really exciting! 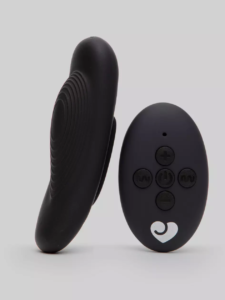 Well here’s all the deviously juicy plans I had waiting for the Lovehoney Rendezvous:

How many different ways can you think of? There are so many possibilities!

When used I’ve like to use it in creative ways during foreplay, and sometimes that has been in public locations. I prefer my partner to not focus on making me orgasm when using it, but rather tease me, and offer playful build-up for our time together later. The vibrations aren’t too loud and in a club or similar setting, the sex toy is likely to go unnoticed.

Can I orgasm with it? The vibrations are powerful enough for my body to reach orgasm with it, but I just prefer reserving it as a non-orgasm-focused sex toy, as it’s not always about orgasming.

The sex toy is splashproof, meaning that the remote and main toy can’t be submerged underwater. When cleaning the sex toy simply remove it from your underwear and wash with a damp cloth and your standard antibacterial sex toy cleaner.

It can be easy to forget to remove the sex toy from your underwear if you go straight from public play to bedroom antics, so remember to check your underwear before you pop any knickers in the washing machine as it may not survive the spin cycle.

Thank you to Lovehoney for sending me this sex toy for my review.