The Lovehoney Easy Squeezy Soft Packers are realist-looking and feel TPE packers that can be worn in lingerie or a packer harness for gender-based play or expression.

Packer is the name for a soft dildo that can be worn by individuals who wish to explore the feel and look of the bulge a penis normally gives. They are popular amongst individuals exploring alternative gender expressions and identities. Some individuals like wearing them daily, others may just use them during certain bedroom role play. It’s up to the individual who buys a packer, how and when they want to wear theirs. But some individuals find it very liberating and there can also form an attachment to a particular packer that helps the individual wearer feel confident and comfortable in their authentic self. 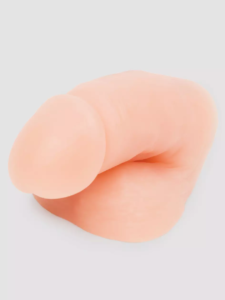 I wanted to try the Lovehoney Packer’s for a few reasons:

When using the packers as sex education and therapy props, many commented on how the smaller packer looked closer to what they expected or were used to. Some were a bit intimidated by the larger packer. Colour-wise, they are only one skin tone, unlike an actual penis which often has various colouration and shading, and some commented on this not being realistic enough for them. A few commented on the lack of foreskin on the packers. The balls were more realistic than they were expecting, and very few have mentioned the lack of pubic hair. As props go and for the price, they aren’t too bad. My main issue when using them as sex ed or therapy room props, is that a lot of handling can make the material feel sticky and greasy very quickly. 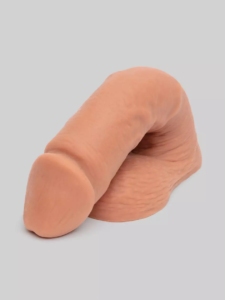 I decided to wear the smaller packer to yoga, and found that even in tight lingerie the movements tried to flip the packer around so the flat side was at the front. It was interesting doing yoga with the packer, but it sadly didn’t stay in position for many of the moves. Later I transferred it into packer-style lingerie with an elastic hole to thread the packer through, but it still tried to move out of position a bit too much for my liking. Oddly I found trying the larger packer sat better against my body and it stayed in position better when changing position and moving around.

Some of my partners enjoy to roleplay certain scenes where I have a penis. We’ve role-played different scenes from pretending I am a cis-male, to even being a shemale (someone who chooses to have both a vagina and penis, there isn’t always a gendered-based reason). The partners I have role-played bedroom scenes with were all consensual and aimed to provide fantasies in a safe space. Many of them just enjoyed the bulge in my underwear, and some liked how they could grope it, a few enjoyed how the penis shaft could cheekily poke out of the underwear. When using a harness designed for strap-on play, some liked how they could penetrate my vagina and grope the packer during certain sex positions, and when pressure was applied to the packer I sometimes could feel it stimulate my clitoris.

The packers get dirty easily, so washing them in warm soapy water after use is very important. Due to the material, it’s best to avoid alcohol-based cleaners as they can damage the item. Once the packer has air dried, using corn starch can help keep the real-feel material feeling soft and skin-like.

Overall, for the price, these packers aren’t too bad. There are three different sizes you can experiment with, that also is available in three skin tone types. You may find different types of packer to be better for you than others, it depends on how you wish to use yours. It may take a while to find the one right for you, but luckily these ones won’t break the bank.

Thank you to lovehoney for sending me two of these packers for my review.