The issue with downgrading the size is that some elements of power are lost when compared with a larger main powered wand vibrator. However, this doesn’t mean that these small travel friendly sex toys are weaker than the average vibrator, on the contrary, they still pack a hefty punch when compared with let’s say a bullet sex toy. Offering 10 intensity levels and 7 different vibration patterns you are able to go from mild soft buzzes, to intense buzzy vibrations, in a click of the button. Having the availability to adjust the vibrations from mild to intense means it’s a good option for those looking for a first-time external stimulator. The rounded head gives less direct stimulations to the clitoris or other erogenous areas which some people may find too harsh when first experimenting. With a flexible neck before the vibrating head you can simply give this to a lover without the worry they will push too deeply against your sweet spots. There’s another bonus to this mini wand, and that it’s lightweight compared to other strong and powerful vibrators. The general rule of thumb for powerful sex tech is that they are often very hefty and bulky, but this one weights hardly anything meaning my hands don’t tire quickly from use. 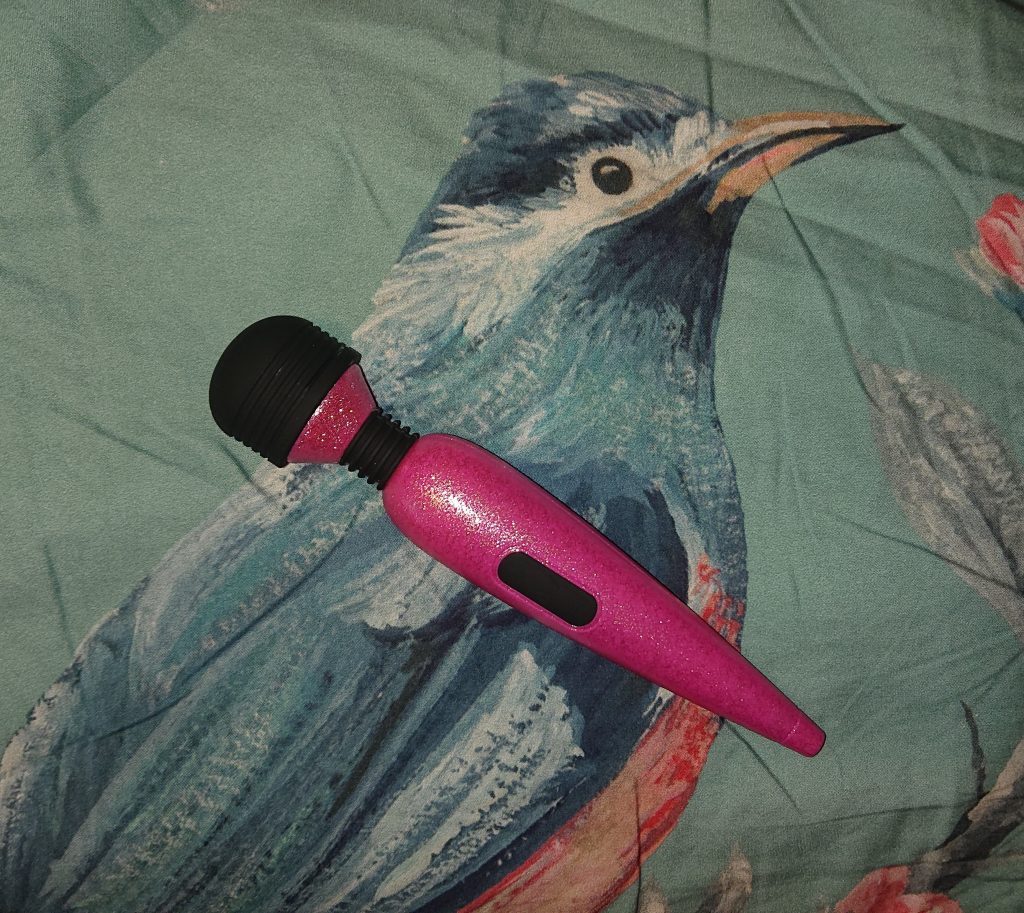 The silicone head gives you the opportunity to explore smooth surface massage over your body, or you can explore the textured groves that ring around the sides to change sensations. I found I needed to apply a good level of lubrication to my body when using this sex toys to really appreciate the intense buzzy vibrations comfortably. The silicone sleeve on the sex toys head can be popped off too, offering you the option of a smooth plastic surface to try.

The one I received to review is coated in pink glitter. At first, I felt it did make the product look a little cheap, but I learned to appreciate it as the texture meant it slipped around less in my lubricated hands. There is however more than one style of this sex toy to choose from, with plain black to iridescent metallic rainbow.

There are three buttons on the sex toy to control the intensity and vibration patterns. The control panel is very easy to use allowing you to be able to press and find the buttons without too much difficulty. One bonus about this little wands buttons that I like is that they are flush against the vibrators body meaning that I don’t accidentally press them mid-flow. So many wands vibrators have controls that can get knocked when you are just reaching climax.

As the mini wand massager is only splash-proof, I recommend using a damp cloth and your standard antibacterial wash to clean it. The grooves in the silicone head can be a little annoying to clean, and the neck can catch dirt, so having a spare toothbrush to clean it can help. If you’re fortunate to own one, you could pop off the silicone head and place it in the dishwasher into the cutlery basket to give it a deep clean, or simply soak the silicone head by itself in sterilising solution. I really do recommend popping the silicone head off every so often as lubrication can get trapped under it. 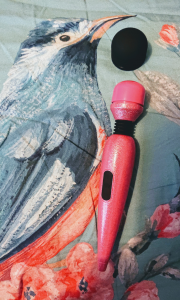 The wand massager is so light it is lovely during foreplay where you’re able to glide and flick the wand over body parts and erogenous zones carefree, allowing you true freedom to tease yourself or a lover.