The EVOKE DU-O is a massage wand vibrator with two functional ends. One end of the massager can be used for internal stimulation and the opposite end has a spinning head that vibrates. The spinning massage head looks like it’s been based on a pizza or pastry cutter and is aimed to offer firmer pressure over the body when used without too much effort from the user. Rotating and spinning sex toys can make me wince as I’ve had many catch and tug at pubic hair and labia, thankfully with the EVOKE DU-O you have control over how it spins rather than a motor, so I was willing to chance the possibilities with this sex toys as I had more control over it. Rather than when letting loose a robotic vibrator’s out-of-control motors spinning uncontrollably over and around my genitals, I felt I could stop the painfully unfortunate wrangles with this toy. 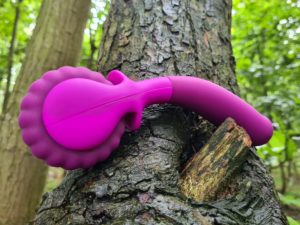 The EVOKE DU-O is a silicone massage sex toy that has dual stimulation options. One end is insertable and offers 11.5 cm length to play with. This insertable shaft is curved perfectly for the G-spot, and it even has a little flick at the end that can be used nicely on the clitoris when preparing your body for insertion. The opposite end has a bumpy wheel that spins on an axel as you glide it over the body. Both ends have vibrating motors that can be controlled separately by two pushbuttons. It is rechargeable and waterproof.

For clitoral stimulation, I did find the spinning head ideal. The opposite end of the sex toy has a slight flick to its shaft which is perfect for nestling over the clitoris. The vibrations are pretty powerful, however, when this end is turned on, it can seem a little noisy when not inserted.

As the massage wand is waterproof it can be washed in warm water with your standard antibacterial wash. Cleaning between the wheel and the main sex toy body can be tricky, I have managed to pop the wheel out partly to help, but I can’t guarantee this won’t lead to possible breakages. 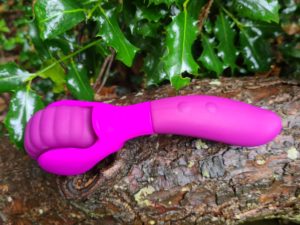 Cons: Button placement is not great when exploring internal play! The noise! Cleaning can be a bit of a pain, particularly between the gaps joining the spinning head and the main massager.