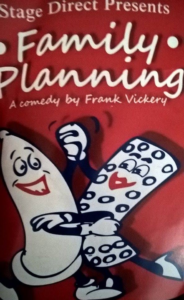 Family Planning, the phrase is associated with sexual health and wellbeing, so when I saw that the local theatre was holding a play called ‘Family Planning’ I was very excited to see the production and how they could promote sex positivity in a fun comedy. As a trained sex educator I’m always trying to find fun ways to get sex positive messages out there and I had great hope that this production would be another way to bring sex education to people. Sadly this wasn’t the case, if anything this product is filled with sex negativity, gender and trans shaming, extreme abuse to an elderly lady, and no sex education or relationship advice.

The show is about a pregnant teen and her journey about telling the people in her life about it. However, the basically led to the pregnancy confession. However, it started with the nan finding out, then the mother who was shocked yet excited, her partner who basically seemed to sleep around (this wasn’t addressed much but would have been an excellent way to bring up condoms and STI prevention, and then finally the father. But the bulk of the show was actually more about the elderly grandmother, who was left alone (even in her own piss), and I personally found it very depressing and upsetting for the lady.

Even though it was clear that the father of the unborn child had been with other women as he got the girls name wrong, they straight away jump into the idea of marriage even though both seen extremely nervous and the guy seemed forced to say ‘I Love You’. In modern society marriage doesn’t happen at a snap of a finger just because of an unborn child. It would have been nice to see this worked through better, particularly as the young girls nuclear family seemed to have many issues, and basically her life was about to set foot onto a similar path.

It becomes clear throughout the show that the mother is unwell and has possible cancer either cervical or breast, yet it becomes unclear if this is the case or if she has even gone for testing for either of these or just something else. I actually was hoping the show was going to address cervical cancer particularly as January is Cervical Cancer Awareness month. I do understand that cancer isn’t really ideal comedy however, I have seen that it can actually be used to promote awareness to screening if done correctly, and the producers really missed out on the chance to educate people in a fun manner and maybe even save lives, if anything they shamed the process.

A lady next door pops over for tea on a regular basis and sometimes brought her son with her, where they basically used gender shaming jokes, as the body was acting with the role with a like for stereotypically cis-female hobbies.  A few of the jokes here could have even been classed as transphobic and showed lack of awareness and respect of non-binary genders. This could be particularly damaging if people were watching it who were struggling with their gender identity. This kind of gender shaming is not helpful and really does not fit with the way modern society is progressing, if anything this kind of comedy is blocking the progression of sex positivity, gender equality, and rights.

Towards the end of the production a lady next door tried to have an affair with the father, this could have been addressed more in regards to his current relationship, particularly when the mother finds out. They could’ve done a fun sex counselling scene which could have been filled with comedy gold, yet in the end it resulted in a fight with a bread knife of all knives and the lady next door stabbing the mother.

This show is not and was not worthy of the name ‘Family Planning’ and goes against everything Family Planning has fought towards. I’d strongly recommend an alternative name. It’s a shame as the seats were pretty full, and I feel this is a time where a name has been used in media form just to gain financial means and moral panic. It basically has been used just to fill the show, yet did not cover really anything that family planning has worked towards.

The Little Theatre in Sheringham has responded to me saying that ammeter productions are not to everyone’s taste. I understand this, and actually the start of my review career started by attending an ammeter production at their very theatre over 10 years ago where I had a journalist apprenticeship with a local paper and was able to write a short review. I have seen many productions since then, including sex positive and ed ones which have fitted with their title and description. A lot of the shows haven’t always been to my taste, yet they still have been as described. This production was not as described and has the potential to being highly dangerous as it just promoted such sex shaming and negativity. This is just another case where a company Should have consulted a sex educator.