The Dame Arc Rechargeable Silicone G-Spot Vibrator, is a sex toy I was really excited about due to its shape resembling a similar appearance to some of my past firm favourite G-spot sex toys. Before it arrived, I was thinking; “Finally, it’s that one design, but done slightly better than those old sex toys.”. This is a shape I had been waiting for a long time to be modernised as before when experimenting with similar it always resulted in a good G-spot orgasm but needed some improvements such as more power and length. Whilst the Dame is manufactured by a totally different company when compared to those versions of old, I had hope that the future had worked in favour and that this sex toy would level-up those past G-spot orgasm experiences. 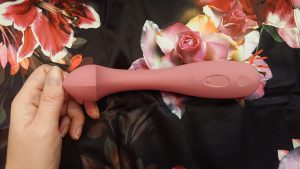 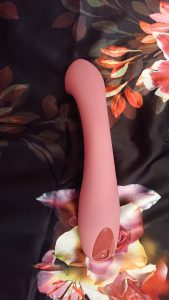 The Dame Arc is made of a firm curved shape coated in velvety smooth silicone. It is a total of 7.5 inches in length and 4.75 inches in circumference. It had a sudden curve at the tip of the sex toy aimed at G-spot stimulation. The vibrator is rechargeable and offers 10 vibration settings. The Dame Arc claims to have powerful rumbly vibrations, but I personally find them rather weak and lacking the rumble element. The vibrations are controlled by three buttons, a on / off button, and an up button and a down button. The buttons are really nice to use and work well with the contours of the fingers to offer comfortable pressing. 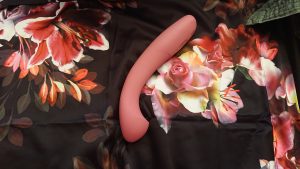 Want to know the best bit about this sex toy?

The Dame Arcs buttons, are some of the best buttons I have ever used. They’re easy to press, but due to the way they are designed it’s also difficult to accidentally knock them.

Cleaning the sex toy is easy as it is waterproof. Simply use your standard antibacterial soap and warm water to wash it clean.

I was sent this sex toy for my review from Lovehoney.