The Jack Rabbit by California Exotics was one of the first well known dual-action rabbit vibrators. This month I received the Rechargeable Black Label Jack Rabbit Anniversary Edition, which is a waterproof silicone rabbit. This is the first time I’ve tested a rabbit from the Jack Rabbit series, although I have tried many other top brand rabbit vibrators, and a few not so popular Cal Exotics rabbits. I was curious to find out whether or not the Jack Rabbit, with its three motors and rotating shaft, would lead to happiness and rampant orgasms like many rabbits in the past. The Jack Rabbit Anniversary Edition already had three promising features, what with it being a waterproof, rechargeable, and silicone toy. These are often the main three elements shoppers look for in a toy now, but rarely do you find them all in a single toy.

The toy arrives in a large cardboard box with a printed flame background on it. The text and layout of the packaging appears a bit outdated in style, but the information provided on it is clear. An image of the product is found on the box, printed in various places. On the back of the packaging is a list of key product features – you will find the list duplicated in several common languages. The product is resting in a basic moulded plastic tray with lid. Inside the box you will also find a charger, which comes in two parts – a USB cord and an AC adaptor. This is great if you’re often on the move, and don’t always have access to either a mains socket or a USB port. The toy takes a total of 8 hours to charge, but retains power longer than some rechargeable toys.


The rabbit vibrator appears pretty intimidating upon first glance. The reasonably large shaft, with indented swirls running down it, gives the vibrator the impression of being much larger than it actually is. Saying that, the toy’s shaft isn’t best suited for those who prefer more slender insertables. The product is 9.75 inches long, with 5.5 inches of penetrative shaft. It is phallic in appearance, and has a slightly curved tapered tip which resembles the glans found on a penis. Inside the glans is the first motor, and internal foam to keep the silicone firm, yet plushy. Approximately 3 inches down the shaft the toy has some additional flexibility, as well as a mound with a motor aimed at G-spot stimulation. At the bottom of the insertable section you will find a rabbit-like clitoral stimulator protruding out of the toy. This is 2.75 inches in length, including its two inch long bunny ears. The rabbit’s nose is approximately an inch away from the shaft, while the tip of the ears are an inch and a half away. The gap between the ears is approximately 0.2 of an inch. The rabbit can be flexed to a 90 degree angle if required. Unlike some rabbits, the silicone ears aren’t very soft. They are certainly very flexible, but the silicone is firm and pointy. The main toy is made from smooth silicone, which produces minimal drag when rubbed against dry skin. There is a manufacturing seam on the product, but this is only noticeable around the rabbit ears. There are various swirly grooves in the silicone, but these aren’t overly noticeable during play. At the bottom of the toy there is an ABS control panel, with various buttons, as well as the charging port. The port has a removable silicone cover. The toy isn’t overly heavy, and is easy to grip.


The toy has three motors. Two are found within its shaft, and one in the clitoral leg/rabbit. The shaft has three modes of vibration and coinciding rotation, while the rabbit vibrator offers a total of seven vibration modes; three continuous speeds of vibration and four modes of escalation and pulsation. The toy is made from a combination of silicone and ABS plastic. The ABS control panel has 4 buttons. There’s an On/Off button, a single button to control the clitoral motor, and up and down arrow buttons to control the shaft’s functions. This means you have the option of using the rabbit vibrator’s and the shaft’s functions separately or together. As the clitoral motor has more functions, I would’ve personally preferred it to be controlled with the up/down buttons. Instead, you have to scan through the settings again if you pass the one you want. This is especially irksome as the device doesn’t have a memory chip to recall your last setting when powered off and on. When the toy is on, a single LED light will glow. The shaft’s vibrations and rotation functions are pretty strong, and even resonate through to the rabbit’s ears slightly. So far I haven’t had any problem with the shaft’s rotations jamming, even when clenching my pelvic floor muscles firmly around it. The rabbit’s clitoral vibrations are powerful, and stronger than many I’ve felt. The toy is unfortunately exceptionally loud, and makes a loud whirring noise whilst on. 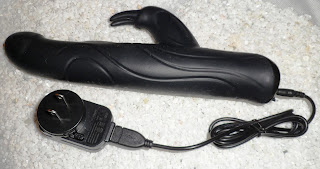 When using the toy, I applied a small amount of additional lubrication. The tapered tip slid into my vaginal opening a lot easier than I anticipated, and the slight curve in the shaft aided in insertion, as it naturally curved into my body. When experiencing occasional issues with insertion, I found turning the shaft’s vibrations on helped. The vibrations and rotations acted as gentle foreplay when used on the lowest setting. I was only able to insert part of the second motor at first, and even when completely inserted, it did not hit my G-spot. I found that, as the shaft rotated, the glans would occasionally stimulate my G-spot. However, this also often meant that the rabbit didn’t sit anywhere near my clitoris. When I was able to position the ears around my clitoris, I found the shaft wasn’t able to stimulate my G-spot at all, or even my A-spot. When turning the clitoral stimulator on, at first I was a little shocked as the ears beat down upon my clitoris. Originally I thought that maybe I lacked lubrication, or needed to alter the position of the rabbit’s ears, but even after trying out various solutions, I wasn’t able to make the clitoral stimulator produce comfortable pleasure. The clitoral motor is very powerful, but even with a weaker motor, I feel that the firmness of the silicone would still make the experience unpleasant. When pushing the shaft deeper inside my body, I was able to press the rabbit’s ears firmly against my body. This prevented them from moving, partly defeating the point of the ears. Sadly I wasn’t able to position the nose onto my clitoris. I ended up twisting the vibrator slightly, so that the ears didn’t rest against my body during use. The toy’s main shaft rotations and vibrations, alongside manual clitoral stimulation, were enough to lead to a pleasant climax, but it’s a real shame I found the rabbit so uncomfortable. I’m not sure if everyone will experience the same problem as I did. It could be affected by the smoothness of the manufacturing line around the ears – as this is a mass produced product there could be some variation.

Cleaning the Jack Rabbit is easy, as it is silicone and waterproof. Even cleaning the textured grooves is easier than on some textured products. Simply use your standard antibacterial cleaner and warm water.


I really wanted to like the Black Label Jack Rabbit Anniversary Edition, but sadly it wasn’t for me. It’s a powerful toy, and if it had worked well for me I would’ve forgiven its high noise output, but it’s hard thumping rabbit ears were just too firm against my clitoris, and ended up being actually painful. However, some people may not find it such a problem, and as I stated above, if the manufacturing seam was smoother on the ears then they might’ve swished over my clitoris more comfortably. If you’re interested in the Anniversary Edition Jack Rabbit, you fortunately have the option of opting for a much cheaper, otherwise identical, battery powered equivalent.