You are here: Home › Review › Pin-Up Bullet and Balm Set

I’ve had this little set for some time now. It’s moved from bag to bag, and when not travelling it generally resides on my computer desk. What attracted me to this product was not only the outstanding pin-up tin, but also the glittery texture of the bullet itself. To me the balm seemed like an added bonus. 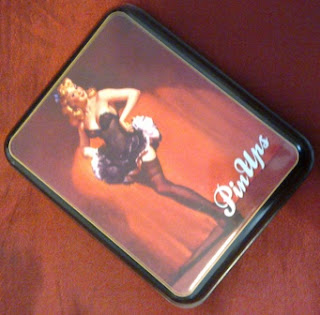 There are three tin designs to choose from, each with a different coloured bullet. All three designs are by the legendary pin-up artist Gil Elvgren. I feel that the three pictures from this pin-up toy collection work well together, as they all share a similar red background. The tin I picked is the one with the blonde haired girl picture and the silver bullet. The product description calls this one, ‘The dazzling Nancy with her glittery silver bullet’. The tin resembles a cigarette case or lip balm container – I have recently seen lip balm tins with similar pin-up designs. After opening the tin you will find a foam insert with space to accommodate a spare battery, a tin consisting of bombshell balm, and the bullet itself. The product uses N batteries; two are provided, one in the bullet itself, and the other resting in the case. The tin really does look inconspicuous; I did once accidently leave it round a friend’s house and was unable to collect it for some time, and as she didn’t open it up she had presumed it contained a more innocent item.  My only problem with the tin is that it can sometimes pop open when transported in a bag. The paint on the tin has started to wear slightly, though I am surprised with how scratch resistant the tin is. 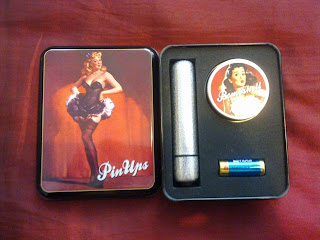 The bullet looks wonderful. The texture makes it appear as if it’s been dipped into glitter, although it hasn’t, so you don’t have to worry about glitter getting everywhere, including your nether regions. The texture feels very noticeable compared to other toys. I had worried that it would feel rough and rub my skin raw but it hasn’t. The silver coating smoothes the texture and when rubbed over the skin leaves a goose bump tingle. To use the bullet you have to unscrew the cap and remove a small piece of paper that is separating the battery and connectors. Whatever you do, don’t remove the cylindrical piece of paper with the battery picture, as if this is removed it might mean your bullet won’t work. The bullet is a simple push button; push to turn on and scan through the three settings to turn off. My bullet seems to be a little temperamental as it doesn’t always want to turn on after the first push, but it isn’t persistent enough for me to feel the need to return it as faulty. The bullet has three intensity settings and each is incredibly strong. Even on the lowest setting the bullet rattles about uncontrollably when rested on a surface. The first two settings are relatively silent compared to other vibratory devices. I’ve found the third setting to have a higher pitch noise but still quieter than some toys.
The balm seems great and adds a little tingle to your body. It smells similar to fresh mint and when tasted, it tastes similar to mint oil. You don’t have to use this balm for just the clitoris, it also works well on other ergonomist zones such as the nipples, and also helps provide an interesting experience for both partners when used during oral sex. The tingly sensation seems to start off slow and becomes strong as it works its way into your skin; I’ve found that the tingle effect isn’t as strong as others, such as Durex tingle. It’s still pleasurable and feels just right when you combine it with the textures from the bullet itself. Not only does it produce a slight tingle effect, it increases the blood flow to the clitoris, increasing sensitivity.  The balm itself comes in a small tin with another pin-up picture; this tin resembles a tin of lip or temple balm. The balm doesn’t seem to leave any form of tackiness on the body and doesn’t seem to cause a rash or unpleasant irritation. I personally have trouble opening the tin. It looks as if it is meant to screw undone, but actually you have to pull the lid off. Once the balm is empty you can either buy another, or replace the circular area within the foam with something else – condoms in circular packaging seem to fit well.
Cleaning the product is simple. Even though it has a dimpled texture, dirt easily washes off its glossy coating, and to make things easier when cleaning, the toy is waterproof.

Overall, I think this is a great little set for the price. The bullet has the right combination of texture and strong vibrations to lead to a very satisfying clitoral orgasm; combine that with a dab of the balm and you are in paradise.

One Response to "Pin-Up Bullet and Balm Set"