Sex Toy Review for the PicoBong Transformer written by Ness

The PicoBong Transformer is a multipurpose sex toy which allows you to experiment with it in lots of sexually creative ways. The possibilities are endless, allowing you to twist and bend its shaft to fit your needs. Whether you want to use the Transformer for solo play in a rabbit form, or as a cock ring, it can be done. The PicoBong can also be used in couple’s play, from being used as toy incorporated into adding an extra buzz into vaginal and penile penetration, to double penetration between girl-on-girl, guy-on-guy, or even guy-on-girl. The product looks rather intriguing at first, but once you’ve had a little fiddle around with it, you can come up with some rather adventurous uses for it. I think the most interesting aspect of this device to me is the ability to use it with a partner, and I was mostly curious to see how it faired when compared to using a standard double ended sex toy – the market is yet to deliver a good vibrating double ender device which can be used by couples, and I was very hopeful to see if this item in particular was the answer many had been waiting for.

The Transformer is made FDA approved silicone, meaning that it is hypoallergenic and body-safe. Its appearance is somewhat unusual, with two bulbous egg-like ends being linked with a thick flexible silicone cable. Each end has a vibrating motor internally, and the vibrations produced travel through the cord without interruption, even when twisted into various curious shapes. One of the ends has the three-button controls engraved into its silicone and the USB charging port hidden under a resealable silicone cover. AT the opposite end you’ll find the brand name ‘PicoBong’ engraved into the silicone, which annoyingly traps dirt and body fluids during use. At the base of each bulb, there is a pronounced ridge prior to leading onto the silicone cable, which can cause discomfort when using as an insertable. It is rechargeable and has a total of 12 vibration modes, which you can adjust the vibration intensity individually. The vibrations are controlled by the three button interface consisting of ‘-’, ‘+’, and ‘M’. To turn the device on, simply hold down the ‘+’ button for a few seconds. Once turned-on, you can scan through the various continuous, escalating, and patterned modes by pressing the ‘M’ button. To change the vibration modes strength simply use the ‘+’ and ‘-’ buttons to adjust them to your personal preference. To switch off the sex toy, press and old the ‘-’ for a few seconds. Both ends of the product vibrate, and it’s impossible to control each end individually. The vibrations offered are of a medium intensity and can be felt throughout the entire product. They smoothly travel through the cable, and offer a mixture of rumbly and buzzy sensations. The item comes with a 1 year warranty.

There are so many ways you can experiment with the PicoBong Transformer, and below you’ll find summaries of a few of the methods I ended-up trying:

Using it as a cock ring during penile to vaginal intercourse sometimes became annoying due to the items being so loose when being wrapped around the penis. We found it successful on the odd occasion, but the time and effort needed in positioning and wrapping the product to your desires, took away the spontaneity and enjoyment of the moment. While on the odd occasion we were able to rest one of the bulbs perfectly between my labia and onto my clitoris, the other bulb would get in the way one way or another.

As a Vaginal Vibrator: I’d tried a device before which could be twisted and bent to suit your needs when it came to vaginal play, however the PicoBong Transformer offers inbuilt vibrators, rather than having to twist a bullet into the mix like the old device I tried. You’d think that this would have an advantage to a product like this, but actually, I found it caused more problems than I had hoped. When using the Transformer as a G-spot vibrator I found that I wasn’t able to get as much of an angle as I would’ve liked for intense G-spot play due to the vibrating bulbs being so long. Sure I could tilt the vibrating bulbs so they would stroke my G-spot more accurately when compared to some vibrators, but I wasn’t able to position them so I could use them in a come-hither motion. I also found that even when tilted more precisely onto my G-spot, that the flexible cord would bend out of place when using in a more vigorous manner. If slow and steady is your forte when it comes to winning the race on orgasms, then this device might work for you, but if you like it hard and fast you’ll probably be disappointed with the Transformer.

The Transformer may be the answer to yours prays when it comes to rabbits though, as you can adjust it so one end sits nicely on your clitoris. So many rabbit vibrators are limited to having the clitoral stimulator positioned X distance away from the shaft, meaning that most rabbits are not a one-size-fits-all toy. 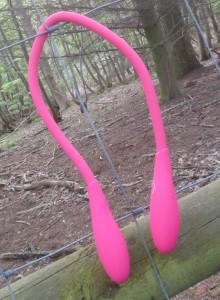 Double Penetration (Vaginal and anal simultaneous stimulation): If you’re looking for a chance to experience penetrative vibrations both anally and vaginally at the same time, then the Transformer works pretty well at offering pleasurable stimulation within double penetration situations. Once I had warmed-up and lubricated my orifices, I popped one bulb in anally and the other vaginally (I’d recommend using the end with the controls in the vagina for easier access). The cord is able to act as a handle; you’re able to produce a thrusting motion which can be felt in both the vagina and rectum. While I found this very stimulating, it wasn’t able to lead me to climax. I feel that for orgasm to be achieved this way that the vibrations would have to be stronger, and that the vaginal proportion would have to be larger – although this is my personal preference and I understand that the vibrations and size of the Transformer would suit some.

When using the device with another woman, we actually enjoyed being able to use a vibrating silicone end vaginally each. While I personally am still dreaming of the ultimate double-ender to use with another woman, this has given us another option to enjoy, as there are very few body safe material devices out there which can be used between two women. Sadly we weren’t able to reach orgasm together, but we were able to enjoy the vibrations, whilst being in various positions together.

When using with a male partner, I was able to insert one end into their anus, and the other into my vagina. Again, it didn’t lead to either of us reaching climax, but it did result in an enjoyable time where we were able to both able to experience the vibrations together in such an intimate way.

To clean the Transformer, wash the sex toy in warm water and antibacterial soap. The item is waterproof which makes it easier to clean, however the engraved logo and rims of the bulb ends will need extra attention during washing.

Overall, the Transformer is an interesting toy and has so many possibilities. For me, the item worked better in some ways than others, however I feel this would differ between other individual / couples experiences, depending on how they used the product and their personal preferences. If you’re looking for a device which can bring new options to couples play, then it’s ones to consider. While it can be used for solo play, I feel it isn’t a toy for those who enjoy thrusting / rocking with their toys to add stimulation alongside the products shape and vibrations.

Thank you to PicoBong for sending me this item for my review.