You are here: Home › Uncategorized › Personal post: Gifts from Lovers
So, today was the first time I have ever received roses as a gift, and I have to say the experience is very different to what I had expected. I wasn’t after a fairy tale style bouquet that would take my breath away. But I was expecting them to be alive upon arrival, bunched-up professionally, and shipped via a florist. The roses I received arrived in a jiffy bag, without any water, and had been picked from someone’s garden. Upon opening the parcels, I could smell their fragrance wafting from their limp and lifeless petals. Was this meant to be romantic, or an attempt to please me while trying to save money? I honestly don’t know. I’m still pleased to have received roses, but I’m rather perplexed by the situation. 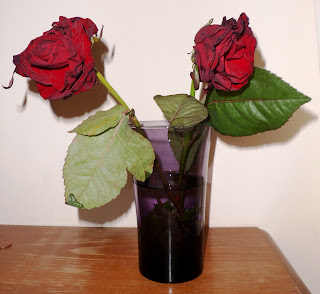 It has made me think about all the gifts I’ve received from lovers in the past, and I’ve made the conclusion that I’m rather unlucky with the gifts I have received.
Here’s a short list of some of the gifts I’ve received that haven’t gone down well:
A bag containing 10 silver pendants without chains. The lover, who sent me these, said it was because I liked jewellery and how I could make them into something wearable. He also stated that it was a real bargain to by a bag of them, rather than purchasing one or two.
Chocolates, normally a box of chocolates would go down well. The lover sent me a large box of Thornton’s chocolates, because he thought I was too skinner and that I was becoming unattractive.
A latex sex toy. I really appreciate getting sex toys from lovers, it can make using a toy feel slightly more special. The lover, who sent me this toy, knew I had a latex allergy, and the product information clearly stated that it contained latex.
A romantic book. The lover purchased me a second-hand copy of a book that’s still in print and at a very reasonable price. But that wasn’t the main problem. The problem with this book was that it had a romantic love letter written inside the cover, to someone else. Obviously that relationship didn’t last; otherwise the book wouldn’t have ended up in a second-hand shop.
An anime mug. Ok I’m an anime geek, I like to watch anime and appreciate certain aspects of Japanese merchandise… but a mug, of an anime I’m not even keen of, was a bit random and odd.
A meat sandwich, ok it’s random, it’s nice to be brought lunch while at work… but I’m a vegetarian, and have been one for a very long time. Also the guy had known me for a few years, so you would’ve thought he would’ve realised?
Wine glasses. Ok it was a lovely thought, but after travelling across the UK with them in a backpack, without wrapping them up in anything, you kind of expect them not to survive the trip.
That’s just a few I can think of.
Oh I also, one time a lover invited me out for lunch. When I got there his mother was there, very eager to meet me. He had accidently told her that he was dating me, and she instantly wanted to meet me. To make it even more awkward she had even purchased me a gift :/
I have had some rather wonderful gifts from lovers in the past, but they are very rare. Also I appreciate receiving anything as a gift really, it’s just sometimes I wonder why I’ve received certain things, or feel that more thought needed to be put into it.
Now… where’s that Viagra to perk those rose up a bit….