You are here: Home › Uncategorized › Oh why do I have to suffer from a latex allergy?
Today has been rather frustrating; I know I must constantly seem frustrated. I spent the morning happily writing reviews for products, I’ll post them here once they are live. Suddenly there was a knock at my door; I knew instantly that it was the postman. For those of you who don’t know my postman even knocks at my door to hand me letter so I wasn’t expecting much. Well amongst various parcels and letters I found a nice little surprise waiting for me from one of my lovers. I eagerly opened it and wondered what it could be; all I knew was that it was from Lovehoney. Well it was only a small toy but there was very little information on the product packaging. After doing a quick search I was disappointed to find that the product contained latex. I suffer from a latex allergy, whether it is found in toys, plasters, and clothing it can’t go anywhere near me. I actually get rather down about it when I see how many toys I could try and what beautiful clothing I could wear. But a latex dress to me would be a coffin. Now I’m wondering how to tell him. I feel slightly bad as when it arrived I instantly said I liked it, and I did/ do. I liked the look of the toy, and I liked how I received a gift; it wasn’t till after finding out it contained latex I started to dislike it. I’m very worried that I will seem ungrateful when I inform him of the problem. He’s rather down today so I’m going to give it a few days before letting him know, this is where Lovehoneys 365 day return policy becomes very handy. 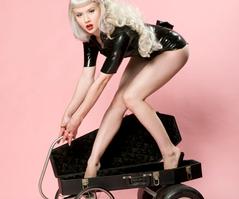 The post I received wasn’t all bad. Yesterday I decided to treat myself to some Sliquid flavoured lubricants. These are something I’ve wanted to try for ages but couldn’t justify the price. They are currently on offer at Lovehoney: Buy Three for £15. I hope they do this offer again as I was only able to get three flavours out of the available six. I’ve done a quick taste test of them and also asked my partner to try a little quickly; so far they seem great compared to other flavoured lubricants. I’ll write more about them when I’ve tested them more. I also treated myself to a very stunning burlesque style skirt from Leg Avenue, now I just need to save up for a new corset to go with it. I have a lot of corsets but none of them are the right red.
Later on in the day I went to the pharmacy to pick up a few things and over heard a group of girls aged 16/17 years. They originally started talking about pedicures and somehow instantly went onto contraception. This is basically how their conversation flowed: ’Coil, no what’s a coil?’ One girl said. Another replied ‘Isn’t that something that goes in your arm to stop you from getting pregnant?’ All the girls laughed as one blurted out, ‘no it’s what they stick up your fanny’. ‘What goes in your arm?’ they all questioned. In the ended they all concluded that the coil could be put in both the arm and fanny. Please note, that fanny was their choice of word, not mine. Now what gets me about this situation was I feel that at their age they should have known. I guess sex education isn’t as good as it could be. There was something else that bugged me about the conversation, they were in a pharmacy where they had consultants that were on hand. I feel that one of the consultants should have corrected them, but they just stood there listening. In the end I had to correct them, which again felt awkward.
After this I visited my partner. I needed to use his computer while I was there as currently I don’t own a printer and scanner. Well I was printing off and scanning some sex related articles that I needed to make notes for. This would have been fine but the scanner wasn’t plugged in and my partner wasn’t very happy having to go round the back of the desk to sort it out. Yes it’s dusty and cramped, but I feel he could have been a little less angry about it. Due to this I still haven’t had sex. I even took the Sliquid lubricant with me and he was only willing to taste test it from a finger; not the place I was hoping. Anyway after cooking him a meal I had to return home to finish some errands but I stupidly left some of the sex related articles in his scanner. He’s currently out at work and is hoping no one wants to use the scanner, he lives in shared accommodation.
Anyway I’m going to figure out what to say to my lover regarding the latex toy, so wish me luck it goes well.
I was going to link the Sliquid offer but it has ended.