You are here: Home › Uncategorized › Minna Ola
When I first heard about the Minna Ola, and how it used touch sensitive technology to form vibrations, I was more than a little intrigued. The Ola sounded like the most interesting advanced vibrator I had heard of in a long time; this led me to think it would be one of the most complex vibrators to use. Sure, there are new innovative vibrators being produced all the time – so often I feel innovative is overused in sex toy reviews – but a lot of the time, these new products have extremely fiddly controls, which aren’t user friendly. I like to be able to pick-up a toy and be able to use it as soon as it arrives, no waiting for it to charge, no fussing with instructions, no having to educate your partner once you’ve vaguely gotten to grips with the toy yourself. The Minna Ola is ideal in every way, in that I didn’t experience any of these problems when it arrived. Once quickly acquainted with Ola, I was left very satisfied. 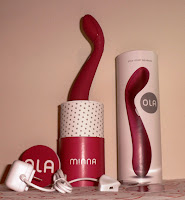 The Minna Ola arrives in a cylinder shaped box which has a very clean and modern appearance. The packaging is rather larger compared to the toy, but luckily Ola arrives with its own satin drawstring pouch. Inside the box you receive an instruction booklet, sticker, charger, silver pouch, and the toy itself with a quick start guide looped round its shaft. The Ola arrives fully charged, which is perfect, as I often find the excitement over a new toy can die down slightly while waiting for it to charge. The quick start guide is a small booklet, with instructional diagrams that are extremely easy to read, and within seconds I had mastered using the Ola’s controls. 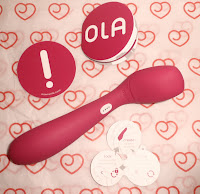 The Ola’s main shaft has a classic shape with a gentle curve, with its jaunty angled handle giving it a funky modern feel. The toy is coated in a smooth matte silicone, which causes mild friction when rubbed against dry skin. There is a manufacturing seam running round the shaft of Ola, which may cause some irritation for those highly sensitive to textures. The vibrator is solid, apart from the touch sensitive pad, which is filled with air underneath the matte silicone coating. After a while the touch pad will begin to deflate; to re-inflate the pad, take the magnetic clip off the charger, and push the jack-pin into the air vent at the back of the pad. The toy is 8 inches in length with 5.5 inches of insertable shaft. The touch pad is 2.25 inches in length and can be inserted too, as Ola is completely waterproof. However, as there is a vent hole at the back of the pad which can trap dirt, I would recommend using a condom if you intend to use it like this. The maximum circumference is 4.25 inches. On the main shaft there are three magnetic pins for the charger to clip onto – these don’t seem to cause any discomfort while using the toy. There are two buttons located on the back of the touch pad, above the vent hole, where the shaft curves. 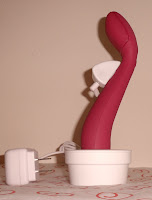 Controlling the Ola with its two buttons and pressure pad is surprisingly simple. The on/off button is a raised circle, and the other button is the mode select, which is a raised ring. There are 3 modes, which the instructions refer to as Vibration Creation, Loop, and Lock. At the base of the toy is the touch sensitive pad, which will create vibrations in correspondence to the pressure you apply. To get started, simply hold down the circular button for a few seconds. As the toy switches on, you will notice it vibrate; this is to indicate how much charge the Ola has left. Three pulsations means that the Ola is at full power, two pulsations is equal to half power, and one means Ola is low on power, and you should consider recharging the toy soon. Ola appears to keep charge better than many other vibrators.

Once on, you can start experimenting with the touch pad. When using the touch pad, you are really able to feel the difference in vibrations when pressure is applied. Light pressure, such as stroking the touch pad, causes the vibrator to softly rumble. Firmer pressure, such as clenching the pad in your fist, will cause the toy to produce high strength vibrations – the Ola is very powerful when you want it to be. Holding down the pad will cause the Ola to produce a continuous vibration. Altering the pressure will vary the vibrations, to produce your desired pulsations. This first mode allows for some very spontaneous play.
After you have gotten to grips with using the Ola, which I assure you won’t take long, you can start recording your creations. Press the raised ring button, which will start flashing red. When this button is pressed once, it will play back any patterns you create, after a short pause. You are able to alter the vibrations at any time by simply squeezing the pressure pad again. Clicking the ring-like button again will save your creation. This button will now emit a continuous red glow, indicating Ola is in playback mode. Ola will play back your vibration pattern in a loop, and touching the pressure pad will have no effect. This means that once you’ve settled on a satisfying combination, you can switch to playback and thus avoid accidentally undoing your creation in the heat of the moment.
You can use the Ola main shaft two ways, either having the curved tip pointing towards the front of the vaginal wall, or inserting the curve the opposite way. When using the Ola I found that I needed a little foreplay prior to insertion, as the tip isn’t overly tapered. The silicone does soak up moisture, so you may want to use additional lubrication. When using the Ola with the tip facing the front of my body I found that it would occasionally stimulate my G-spot, but the shape and length of the toy was better at stimulating my A-spot. When using the toy with the back of the curved shaft facing the front, I found the toy stimulated my G-spot better, but wasn’t able to apply enough pressure to induce orgasm. Though the Ola wasn’t quite the correct shape for my G-spot, being able to control the vibrations was enough to arouse me, and it felt immensely pleasurable. When using the toy in the first mode, I enjoyed how as I got closer to climax, my hand would naturally grip the touch pad harder and more frantically, and as climax calmed, my hand would quiver and softly come to a halt, make the vibrations feel as if they belonged inside my body as a natural part of arousal. When programming the settings I liked how I didn’t have to scan through any pre-programmed settings, and could instantly set it to the pattern I desired, depending on my mood and how quickly I wished to reach orgasm. I was in complete control of how strong and fast the pulsations were. I did find a slight problem when recording with the toy; sometimes I would accidentally double press the mode button, meaning that I would record less than anticipated. However, this didn’t happen often. Even when the Ola becomes covered in lubrication, the touch pad is still easy to use.
You are able to insert the touch pad, but as there is a vent hole at the back of the pad I would recommend using a condom, as it would be difficult to clean properly. Inserting the toy this way was a bit trickier, but once inserted it did hit my G-spot. It was fun being able to clench the soft jelly-like touch pad with my kegel muscles, but as the vibrations are focused at the tip of the opposite end, I didn’t feel much benefit from being able to manipulate the vibrations.
The Ola works well as a clitoral stimulator, which surprised me considering the shape of its tip. Again, I like how much I was able to control the toy, as sometimes I want very powerful clitoral stimulation and other times I want soft and mild stimulation.
When inserting the main shaft of the Ola, because the base with the touch pad is flared and sharply curved, you could use the Ola for anal insertion. I would recommend placing a condom over the toy for anal use.
The Ola is a great couple’s sex toy. Basically, I handed the toy over to my partner to play around with, and quickly explained how it worked, and within seconds he had successfully managed to record his own vibration patterns. 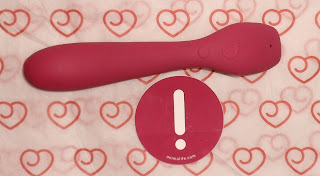 Cleaning the Ola is simple. Unlike some silicones the Ola doesn’t attract too much dust. When not in use you can store it in the pouch provided. The Ola is waterproof, so it can be washed easily; just pay a little extra attention to where the air vent is located, at the back of the touch pad.
When recharging Ola, the toy’s power button LED will pulsate. To indicate when it is fully recharged, both the power and memory buttons will pulsate slowly.
Overall, I’m thoroughly impressed with the Minna Ola. It’s probably one of the best vibrators I own, as it’s not only unique, but it’s also fairly powerful when desired, and is well made. I really love how easy the Ola is to use – it makes it one of the most enjoyable toys I’ve ever tried.
You can purchase the Minna Ola from Lovehoney here.