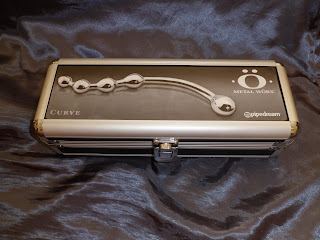 The Curve arrives in a large box similar to a heavy duty cosmetic case. There is a metal latch on one edge of the box, which disappointingly doesn’t have any form of lock. This really isn’t a problem for me, but I know a lot of people use lockable cosmetic cases to store their sex toys in, and I feel that if this case did have a locking mechanism it would be very convenient for those in shared accommodation. There are two large stickers on the box which easily peel away from the black faux leather. There is a small amount of information about the toy stating it is hand-polished, nonporous, ergonomically weighted, eco-friendly, and nickel-free. The Curve rests in a foam cut-out which is also removable, meaning you have the option to store additional toys or lubricant inside the box. I rather like the box even though it is a little big, so I will probably store additional toys such as a bullet alongside the Curve. 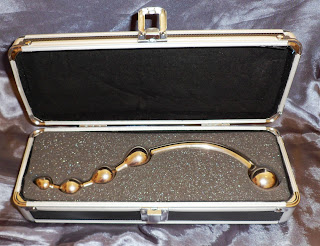 The Curve looks beautiful while it is resting in the dark foam; you can really appreciate the gentleness of its curves as light reflects off its smartly polished surface. When removing the Curve from its case, it shocked me how heavy it felt. The weight reassured me that the toy was good quality, but I must admit that I was slightly concerned whether the weight would affect how easy the toy was to control. The Curve is 10.5 inches in length with two useable ends. One end of the toy has a bulbous rounded tip that is intended for G-spot stimulation. The rounded tip end is 4 inches in circumference and the main shaft is only 1.75 inches in girth. I found this to be a very sudden change in girth compared to other toys I own, and I wondered if I would find the overly thin shaft as enjoyable as a thicker toy. The curve of the shaft is also more extreme than I had expected. The other end of the toy has four beads on a gentler curve. The first bead has a tapered tip, similar to the point of an arrow, but of course blunt. The first bead is about 2.5 inches in circumference and the last bead is 3.5 inches. Each bead has a gap of about half an inch before the next.  Even though the toy is very heavy compared to a silicone or plastic toy of the same proportion, it does have a nice balanced weight. The beaded end also fits comfortably in a clenched hand, offering a great amount of control, whereas, even though the rounded end is relatively easy to grip, it doesn’t seem to offer as much control. 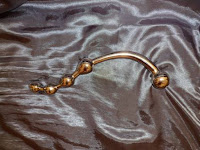 When using the toy I found it best to warm it under some warm water before use, as it can feel freezing cold when first touched. The toy does heat up very quickly, quicker than aluminium and glass toys, so be careful not to scald yourself. When using the rounded tip of the toy for vaginal insertion I was amazed that no lubrication or foreplay was needed. The toy gently popped into my vaginal opening and comfortably curved towards my G-spot. Due to how much the toy curves, I found that it kind of opened up my vaginal opening, meaning that only certain parts of the shaft would touch my vaginal wall during use. I found the sensations of the shaft stretching my vagina very enjoyable, and different than when using a wider girth sex toy. The rounded tip worked well in stimulating my G-spot consistently, and due to the weight of the toy, I found very little effort was needed to stimulate me when thrusting or rocking the Curve. This toy seems to give you one hell of a G-spot orgasm, and if you are interested in exploring your G-spot and female ejaculation, then it’s a very worthy option. It’s almost addictive to use; I really couldn’t get enough of the rounded tip end, so it took me some time before I tried out the beaded end. 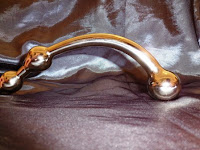