You are here: Home › Uncategorized › Mates Skyn Non-Latex Condoms
Lovehoney kindly sent me a pack of 12 Mates Skyn condoms to review. These are actually my standard condoms as I suffer from a latex allergy, but I was still pleased to be sent a pack to review.
I’ve suffered from a latex allergy ever since I was a kid. Over the years I had learnt to be cautious when using items such as washing up gloves, and even plasters. When venturing into the world of sexual intercourse, I didn’t think that condoms would be next on my allergy list. I was a lot younger then and didn’t pay much attention to my surrounding, let alone taking the time to read the condom packaging. After a few days of using the condoms my body was showing signs of irritation and discomfort. At first I thought it was the amount of sex I was having causing the discomfort. While waiting for my lover to bring up some lunch I actually took the time to read the Durex packaging. It clearly stated that they were made from latex, and in all honesty I felt rather stupid for making the mistake in the first place. The remaining condoms were immediately discarded and I looked for an alternative.  Luckily I already knew of my latex allergy, but if you are experiencing any form of discomfort around your nether regions I would recommend consulting your Doctor, and changing the condoms you are using to a more body friendly alternative if that is the cause of the problem. 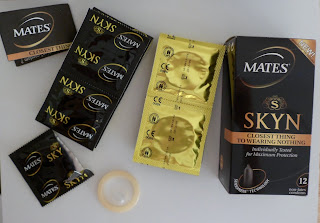 Mates Skyn condoms come in a cardboard box containing twelve condoms made from Sensoprene. Sensoprene is a material designed to simulate latex. The condoms are designed to fit the average penis. They are meant to offer a great fit, with the strength of a latex condom, while maintaining sensitivity.  The condoms are packaged individually in black and gold wrappers. Each individually packaged condom can easily fit into a purse or pocket.
Also within the box is an informational leaflet. The leaflet states that you shouldn’t use oil based lubricants with latex condoms, as oils can damage latex. I was a little confused when reading this as these are not latex condoms, so I contacted Mates for more information. Mates got back to me and said the following: “Even though the product is not natural rubber latex it is a synthetic latex which will be affected by oil based products therefore we can only say to use water based lubricants”.
They are lubricated with non-spermicidal coating. The lubrication doesn’t really have a taste or smell to it, but it is slightly greasy, and can leave marks on some fabrics. 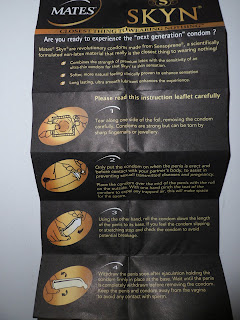 The condoms are very easy to use, especially when you follow the instructions provided.
Step one: Tear along one side of the foil to open.
The foil packaging is very easy to open compared to some condom packaging.  In the past I’ve had to fight my way into a condom wrapper, which can ruin the mood, never mind the condom. I’ve never experienced this with Mates Skyn condom packaging.
Step two and three: Pinch and roll the condom over an erect penis or toy.
Both I and my partner have found these condoms very easy to roll over an average sized erect penis. We have experienced no problem in finding which way the condom is meant to be applied. I have also used one of these condoms on an above average sized sex toy; the condom rolled onto the toy with ease. The condoms seem to fit pretty snugly on my partner’s penis, as well when put onto a sex toy.
Step four: Withdrawing the penis after ejaculation.
When my partner withdrew after ejaculation we experienced no problems. The condom didn’t fall off or drip semen. The condom was very easy to remove, and made after sex cleanup simple.
Both my partner and I like Mates Skyn condoms compared to others we have tried. They don’t block sensations as much as some other condoms, and they are extremely easy to use. They fit comfortably, and don’t feel like a plastic bag has been inserted into my vagina. We’ve never had a Skyn condom break, or arrive defective. The lubricant used doesn’t cause either of us irritation, and doesn’t smell or taste as bad as on some lubricated condoms.  My partner claims that when using these condoms he experiences greater sensation than when wearing a latex alternative. We have tried a few other non-latex branded condoms, but have always been disappointed by the fit and feel. Some other brands don’t fit as naturally onto the penis, causing those off-putting plastic bag sensations.
Overall, I like Mates Skyn condoms, and I feel that even if I didn’t suffer from a latex allergy they would still be my condom of choice. If you are looking for a condom that offers greater sensations than most, then these condoms are worth trying.
You can purchase these Non-latex Condoms from Lovehoney.