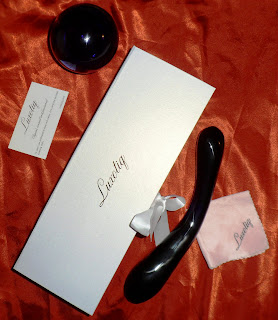 The Athena arrives in a pearly white and pink gift box with Luxotiq printed on the front. Securing the box closed is a white satin ribbon tied in a bow. Just opening the box up, makes you feel as if you are gleaming with opulence. The Athena is placed on lined satin padding, allowing the toy little movement when in storage. Alongside the toy, there is a small business style card with cleaning instructions. The toy also comes with a soft pink cleaning cloth with the brand name printed on it. The cloth is very similar to a lens cleaning cloth. This is the first sex toy that I have purchased which comes with an actual cleaning cloth. When I first removed the Athena from the box, I actually sat there for awhile just polishing the gorgeously shining glass and admiring how the sensuous curves flowed between my palms.

The toy is rather long at approximately 9 inches; both ends can be used to stimulate either the A-spot or G-spot.  The shaft is very smooth and texture free, there is a slight bend at the centre of the toy, allowing it to comfortably fit your body’s anatomy. The toy has two bulbous ends that are slightly tapered for insertion; the shaft gradually gets thinner towards the centre of the toy. Both ends have different girths. One end has approximately 4.75 inches in girth; this end also has an ‘L’ signature printed on it in white. The other end is approximately 4 inches in girth.  The blue glass is beautiful and appears slightly different in shade depending on the rooms lighting. The Athena is more weightily than a silicone or plastic toy of similar proportion, but it does has a nice balanced weight to it, meaning that you can easily hold it at the centre.  As well as both ends being perfectly tapered for comfortable insertion they also fit nicely in the palm of a hand, making them a great handle for when using either thrusting or rocking motions.

The Athena is a great toy when in use, whether you want to use the thinner end as an A-spot stimulator during foreplay, or if you wish to use the wider end for firmer and stronger G-spot massaging. The toy is very easy to interest without additional lubrication, if you have difficulty inserting the wider girthed end you can easily switch the toy round and use the thinner end until your body is more aroused. I found that when using the thinner end it worked better as an A-spot stimulator, whilst applying a thrusting motion. I was also able to position the thinner end onto my G-spot, and use the toy in a rocking motion providing some G-spot stimulation, but not enough to produce a strong G-spot orgasm. I personally prefer wider surface areas in toys, when reaching G-spot orgasm. The Athena is perfect as you have the choice between the thinner end and the wider end for stimulation, and both seem to accommodate my G-spot.  When using the wider girth end I found that the toy easily entered my vaginal opening finding the G-spot quickly. The wider end was easier to use in a thrusting motion, rather than rocking motion, and this would produce a guaranteed strong g-spot orgasm rapidly. I particularly liked using the wider girth end for deeper and more firmer thrusts, and found that due to how the shaft is thinner in the centre that each thrust was more controllable compared to when using some other shaped toys. I really enjoy how the Athena gracefully moves along the vaginal walls while caressing my body passionately. The length is also a bonus as it makes the toy easier to grip even when it becomes very wet. I found that no matter which end or motion I apply when using the toy, due to how the shaft curves the toy is very easy to use and doesn’t cause my hand to tire.
Cleaning the Athena is very easy, I found that when washing with your standard antibacterial wash and water, that it is best to hold the Athena in the centre because it can become very slippery when wet.  The centre of the toy offers the most secure grip. It is recommended to dry the Athena with the cloth provided, this will leave your toy looking beautifully clean, sparkly, and free from marks and finger prints.
The wider end of the toy also works well as a body massager, providing enough pressure to ease away aches. The thinner end doesn’t seem to work so well when using as a general body massager. Athena will adjust to temperate quickly when running under a cold or hot water.
Overall, I’m really pleased that I purchased the Athena. It has happily made its ways to the top of my toy list, not just because of how beautiful it is, but also due to how functional it is when providing G-spot stimulation. I would recommend this toy to women who aren’t overly keen on wider girthed toys as it has two functional sides, where one is rather thin compared to some other glass toys. I also like how both ends are functional as a G-spot stimulator, and that when used in a thrusting motion the thinner end can provide deep and accurate A-spot stimulation. This is a toy that I’m going to try and treasure forever, and it will get a lot of use even if it’s me marvelling at its beauty while polishing it.
You can purchase this toy from either Eden Fantasys, or La Coquette