The LoveArc is a self propelling sex machine designed to be used with suction-cup base sex toys. It’s a device the industry and consumers have been waiting for when it comes to being able to fully utilise those suction-cup toys to their maximum potential, without having to put too much foresight into when and where you will be playing and placing your suction toys. With the LoveArc’s help you’re able to use your suction-cup toys with more spontaneity and within more comfortable settings – previously people have found it hard to place their suction cup toys within the bedroom and have opted for less stable chairs, sides of the bath, and kitchen work-tops. Not only can you place the LoveArc in any room you desire, you have the ability to angle your suction-toys, so they reach your sweet spots perfectly. The device can also be used in two amazing ways; one being a stationary position, the other is self propelling rocking motions to help you thrust your way to climax. This versatile device also allows you to use multiple suction-cup toys at once, also allowing you the option to use it with a partner at the same time, or simply lets you explore double penetration with greater ease.

The device is made from aluminium, and is made-up of three solidly fixed parts: a weighted graspable and smoothly turned handle, an arced piece of smooth anodised aluminium, and a weighted bit of aluminium with rubberised grip at the back of the arc for stability. The item is a total of 3 kg in weight, with a length of 37 inches long and 7 inches wide. The metal arc is the ideal width for most standard sized suction-cup toys. The arc’s edges have been smoothed so they don’t uncomfortably dig into the users thighs during use. The product has some give in it, meaning that when using the item in a fixed riding position, the aluminium will sometimes bounce as you ride your sex toys, although the product will maintain its shape and not permanently warp from use (if anything this added bouncing motion adds to the fun of using your suction cup sex toy).

Two Suction-cup Toys on the LoveArc in the Rocking position.

The appearance of the LoveArc doesn’t scream sex toy. If anything it looks more like a piece of exercise equipment, or even the base for a modern glass coffee table. I’ve managed to leave the product around my place, and even when questioned by others, I’ve easily passed it off as modern art or something more sociably acceptable (although really, sex toys should be sociably acceptable in my eyes). 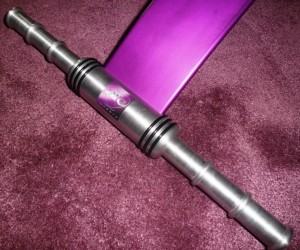 When using the LoveArc I decided to experiment with the product in multiple different ways, first starting with some solo exploration. 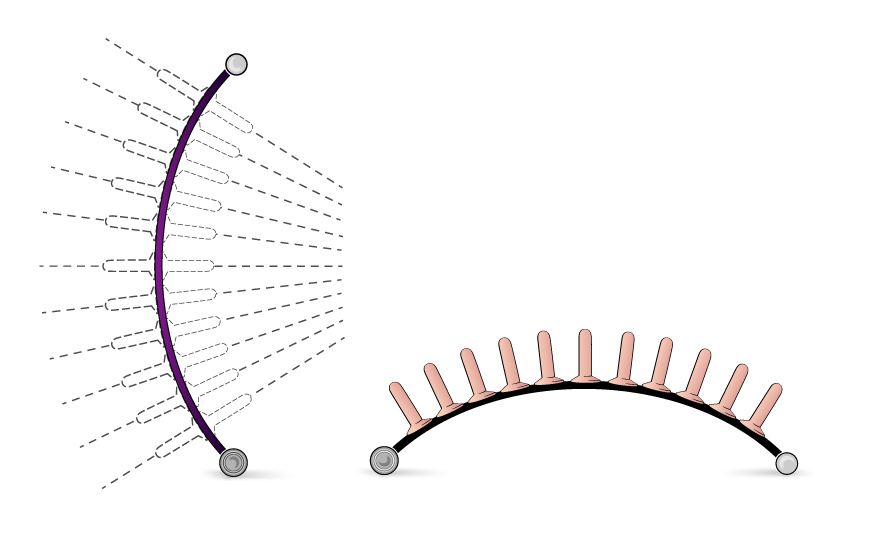 The various places you can fix suction-cup toys to the LoveArc.

When it comes to using the device in the rocking position, you may find certain textured toys or ones with pronounced angles to cause different sensations and hit different sweet-spots. I did find some suction-cup toys cause a little discomfort during use, but that was generally sorted by angling the product different and positioning it on a different area of the LoveArc. 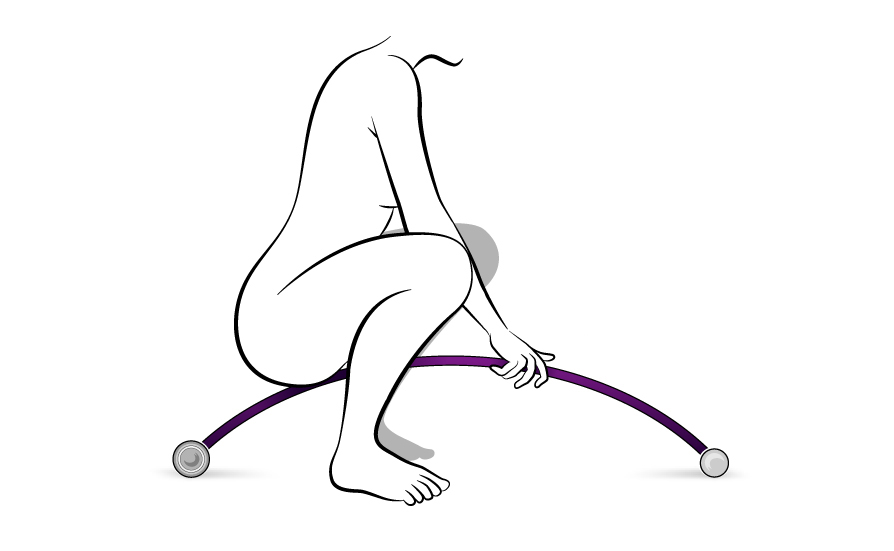 Using the LoveArc in a riding position.

During the riding position I was able to position one of my Magic Wands against the metal, which allowed the vibrations travel through the LoveArc and any suction-cup toys that were attached. 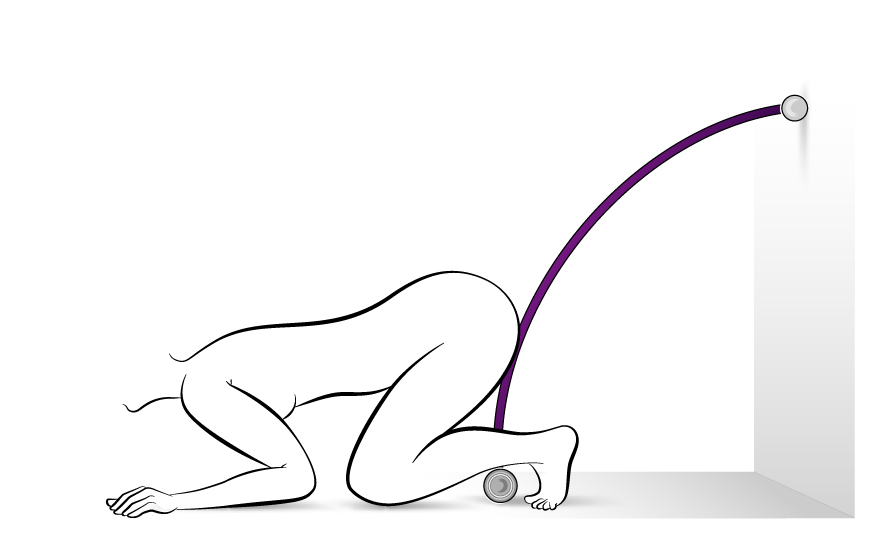 Using the LoveArc in Doggy Position.

I was nervous about using the LoveArc against the wall, as I feared that it would fall during use, and possibly lead to an injury. However this did not happen and the product made the experience with suction-cup toys more comfortable and enjoyable than when just sticking them to a flat surface. Being able to place the Arc between my legs and have the ability to thread them behind the device really did make a lot of difference when controlling my thrusts onto my sex toys. 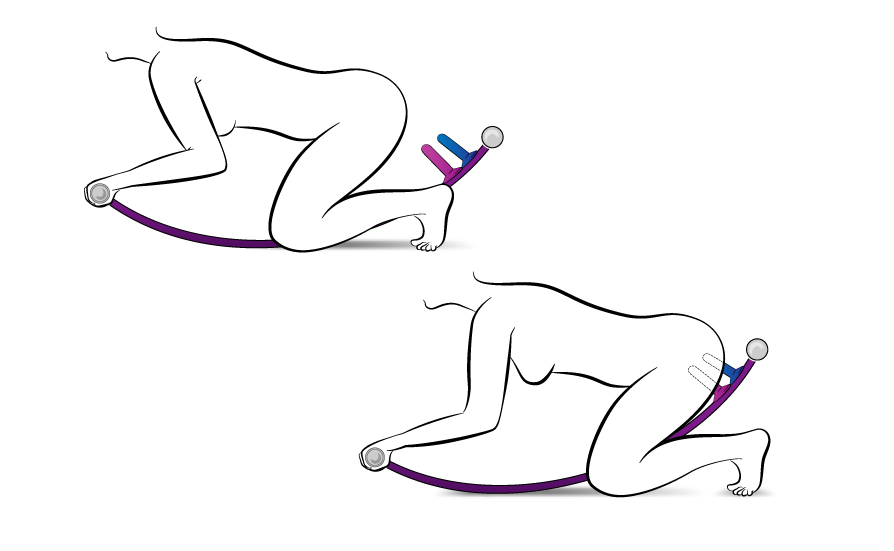 The LoveArc can be used together with a partner. We found it easier to use in the more stable riding position rather than rocking (although it’s still possible). It allowed both my partner and I to be penetrated at the same time, whilst also being able to have our hands free to stimulate each other’s body parts.

I found a willing submissive to test out the product for prostate play in the rocking position. We found that certain dildos weren’t the correct angle for them to enjoy it comfortably, but when the right one was in position the experience was rather pleasant. The best toy we used for prostate play was a large suction-cup butt plug, which also had an internal free roaming ball inside it, meaning that it caused massage-like vibrations as it was being rocked in and out of their anus. I loved how I was able to rock the LoveArc for them with my heeled foot, and then make them learn and worship my feet during the process too. I could quiet happily sit in my thrown, sip away at a cup of tea, and just rock them away into ecstasy without putting in too much effort into the process myself. It also allows me to experiment with forced bi at the same time as the sub rocks away; their head is able to rhythmically bounce back and forth over a strap-on or another submissives penis.

A butt Plug on the LoveArc in the riding position.

You can find two clips of one of my submissives using the sex machine here:

Top Tip: if you’re having trouble sticking some of your suction-cup toys to the device, apply a bit of water-base lubricant on the suction base prior to fitting.

Cleaning the LoveArc is simple, simply twist and pull off your attached suction-cup toy, and then wipe the aluminium device down with antibacterial soap and water. Do not use bleach solution with the machine as it will make the anodised colouring fade.

Overall, I like the LoveArc and all its possibilities. Before, I basically never really used the suction-bases of my suction-cup toys as it was too annoying to find an adequate environment for comfortable play, but this device has resolved these issues. My only qualm about the product is that when using the item in the rocking motion, it can sway from side to side a bit, causing it to go off course during masturbation sessions. It really has solved my problems when trying to enjoy double penetration solo, which I’m thankful for. I also feel it will get a lot of use within my dungeon – everyone needs a go on a fucking-horse / rocking-horse.

Thank you to LoveArc for sending me this interesting sex toy to review.