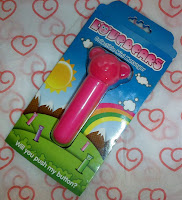 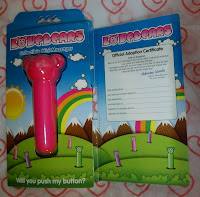 The Love Bear Bullet arrives in rather funky Japanese/80s cartoon style packaging. It reminds me a little of the Care Bears and My Little Pony, but more modern. On the back of the packaging you will find a small amount of information about the product. When opening the packaging, it feels similar to opening a gift card; it slowly opens out showing images of Love Bears enjoying their time in a happy valley. Once the case is completely opened, you will find an Adoption Certificate for you new Love Bear. Though I liked the quirkiness of the certificate, and that it would make a nice gift as you can easily fill it out and seal the packaging up before presenting it to someone, I have one problem. Maybe it’s just me, but claiming you are the parent of a sex toy doesn’t seem right to me. I feel better wording could’ve been used here, such as guardian. I guess I’m just picky, as the actual toy and the rest of the packaging are still good. 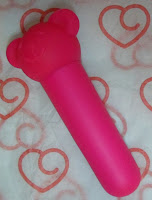 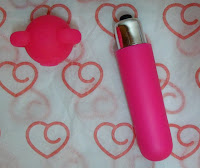 The bullet arrives with its own N battery, and to start using it all you have to do is unscrew its cap and remove the piece of paper blocking the battery connectors. The toy’s coating is made from skin safe silicone and should only be used with water based lubricant. The bullet is encased in a removable silicone shell. On the top of the toy there is a bear-shaped head which can be removed. The Bear has similar features to your standard teddy bear. There’s a mouth, nose, two eyes, and two ears, which offer some texture. I don’t know why, but the toy reminds me of a PEZ dispenser. On top of the Bear’s head you will find a push on/off button that can easily be pressed through the silicone casing. There’s also a power symbol on the silicone to indicate where the button is. When removing the Bear’s head I have found the battery cap can pop off sometimes. Also, over tightening the battery cap will make it pop off, so be careful. The bullet is coated with silicone which can be removed, but due to the length of the bullet it can be tricky, and it is very difficult to put back onto the toy. I wouldn’t recommend removing the silicone on the main shaft. The toy is 3.5 inches in length, with 2.5 inches of girth on the main shaft. The bear-like head is about 4 inches in circumference. I doubt many people would recognise this toy as a vibrator.
The bullet is only a single speed vibrator; the vibrations are moderately strong and slightly buzzy. They are strongest at the tip of the toy, only offering mild vibrations within the Bear’s head. I personally would’ve liked more vibrations to be felt in the Bear’s head, as this is where the textures are. The bullet isn’t quiet, but it isn’t too loud; I doubt it would be able to be heard from a different room when in use.
During use I found that the Love Bear was best used alongside additional lubrication, as the silicone absorbs natural moistures. The Bear’s head acted as an excellent handle during clitoral stimulation, and didn’t fall off at all. I found the silicone coating on the main shaft to be smooth, and it didn’t cause any discomfort. I often find a lot of bullets have manufacturing lines and dimples which can cause discomfort, but the Love Bear’s main shaft is coated with completely seam-free silicone. Personally I found the vibrations a little too weak to cause me to have a strong orgasm. As the head of the toy is easily gripped, I found shallow vaginal insertion easy, and the stimulation from the vibrations acted as a good warm-up. I wouldn’t recommend the Love Bear for anal stimulation, because even though the head offers a flared base, there is always the possibility of it falling off during use.
I tried using the Bear’s head to add some textured stimulation, but found the vibrations too weak. The mouth and eye textures also feel a little rough when used with only a small amount of lubricant. I did enjoy using the ear to stimulate my clitoris, and feel that using the ears in a flicking motion would’ve cause me to orgasm, if there were stronger vibrations within the Bear’s head.
Cleaning the toy is fairly easy, but the toy isn’t water proof, so be careful. The Bear’s head can be removed and cleaned separately, but make sure it is dry completely before placing it back on to the bullet. The silicone attracts dust so you’ll want to store it in something when it’s not in use; the packaging can be reused if needed. 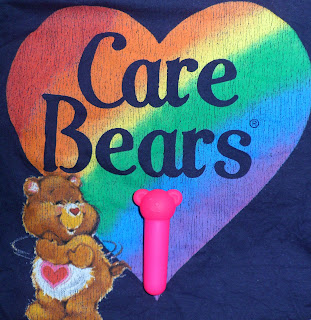 Overall, I like the Love Bear as far as standard one speed bullets go. The silicone coating is great, especially if you often experience problems with firmer, rougher textured toys. I also like the bear head and how it makes the toy very easy to handle. I just wish the vibrations were a little stronger, and could be felt through the head more. I know I often complain about toys vibrating too much around where you’d normally grip, as they can be hard to hold, but to me the textures on the Bear’s head are meant to offer added stimulation. The Love Bear is a cute addition to my collection and will be replacing a few bullets I already own.
You can purchase the Love Bear Bullet Vibrator from Lovehoney.

One Response to "Love Bear Bullet"