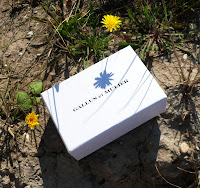 The Little Rooster by Gallus et Mulier is a rechargeable vibrator worn externally throughout the night, which wakes you up with its softly buzzing alarm features. Yes, the vibrating alarm clock is born, complete with its own digital time display – especially handy if you’re keeping to a strict schedule. I was curious to see how comfortable the Little Rooster would be during wear, and if I would still be able to comfortably slip into a comatose state, undisturbed until its gentle vibrations attempt to rise me from my slumber. Will this alarm clock make me look forward to its automatic snooze, or will it be chucked across the room in a tired fit of fury?
The toy arrives in a solid white cardboard box with the company’s name printed on top of it. The packaging looks very modern and totally unlike most sex toy boxes; no casual observer should have any suspicions. Upon opening the box you are welcomed by a famous Latin quote, printed on luxury parchment paper. The quote is as follows, “Post coitum omne animal triste est sive gallus et mulier – Claudius Galen (AD 129 – 217)”, and translates as “Every animal is sad after sex, except the human female and the rooster.”  Underneath this you will find an instruction leaflet, explaining how to set up your new morning companion, and the toy itself, resting in a velvet-lined foam insert. 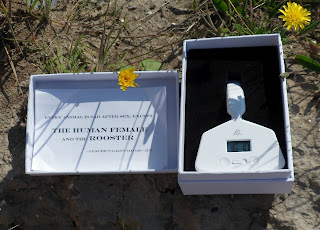 The toy is made from a rigid glossy plastic and is available in various colours. The one I received is white and appears more like a medical implement, such as a digital thermometer, than a pleasure object. The face of the clock is a 5 sided polygon, with a thin angled leg protruding out of the top of it. This face is approximately 3 inches by 2 inches, and is meant to rest on the pubic mound whilst you sleep. Its underside is flat, smooth, and rigid. The toy’s interface consists of two push buttons, a sliding control, and a digital clock display. Below the sliding control you will find the charging port, which is completely exposed – I would’ve preferred it to have some form of cover, to prevent grime and sweat getting into it. To the right of the charging port is a reset button, accessible only by using a thin pin or needle. Above the clock face there is a thin rod jutting outwards at about a 45 degree angle. This contains the vibrator’s motor, and is supposed to sit over the clitoris as you sleep. It is 2.5 inches in length, similar in size to a little finger. It’s rectangular in shape and inflexible. A slight gap runs round the entirety of the product, inviting dirt. The toy is rechargeable via USB, and comes provided with its own charging cable. When wearing the Little Rooster you need to be wearing underpants or similar to keep the toy in position throughout the night; there is no other way to attach the toy to your body. 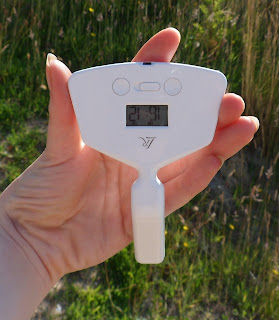 The alarm clock is operated via the three control buttons. To set the alarm and time, make sure the sliding control is positioned to the far left, and then press the left hand button. Whilst programming each feature, the setting you are adjusting at the time will flash on the LCD screen. An alarm symbol will appear at the top of the display, indicating that you are setting the alarm. Pressing the right hand button cycles the minutes, then press the left hand button to move onto selecting the hour. Clicking the left hand button once again moves onto setting the current time, starting with minutes. This follows the same process as setting the alarm.
After setting the time and once again hitting the left hand button, you are able to set the toy’s vibration strength. This ranges from 1-30. There are three vibration modes to set, displayed as LO, HI, and Sn. When the alarm is triggered the Little Rooster will start off at the lowest vibration setting you select, and will then gradually move onto the highest vibration setting you desire, aiming to wake you up slowly. The third vibration setting is the snooze vibration intensity. Once the intensities are set, you can select how long you want the vibrations to run for. This can be from 1-9 minutes. The last setting allows you to choose between 24h or AM/PM display. Once all this is done, you can check the alarm time by pressing and holding the right hand button. 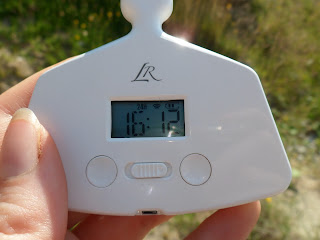 To set the alarm as active, slide the middle switch to the centre. When the alarm goes off, the toy will beep immediately after the vibrations. The snooze can be activated by pressing the right hand button when the beeping starts. You are unable to disable this beeping noise.
To activate the vibrations slide the switch to the far right. The instruction booklet states this is ‘play mode’ but for me the square tip isn’t really suited to pinpoint clitoral stimulation. The booklet also advises against inserting the toy’s ‘leg’ and applying too much pressure or twisting the neck. 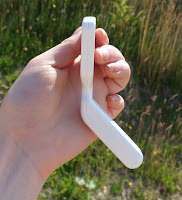 When wearing the toy, I first positioned the vibrating stem between my labia and onto my clitoris, before resting the flat polygonal face onto my pubic mound. I then pulled up a pair of briefs – one of my more flexible and looser pairs. The toy can also be held into place by more skimpy underwear such as thongs. The toy managed to rest in position well. Although it wasn’t particularly uncomfortable, I would’ve preferred the underside to have either been coated in a softer material, or contoured more to rest over the hilliness of my pubic mound.
At first I found that the toy took time to adjust to while trying to sleep, but eventually I managed to nod off. The toy stayed in position throughout the night, and for the majority of the time the Little Rooster roosted comfortably. The buttons are disabled when the alarm is set to active, and the sliding switch stayed put all night, so there should be no worry about your alarm not going off in the morning. I did experience some discomfort when resting face down, mostly when my pubic mound was swollen due to natural monthly hormonal changes. You may wish to avoid using the Little Rooster a few days before your menstrual cycle, or when experiencing discomfort around your nether regions. 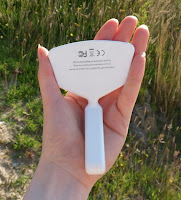 Sometimes, when waking during the night to use the bathroom, I would forget to slot the toy back into position afterwards. But when managing to sleep through a whole night, I found the vibrations of the toy woke me up comfortably and feeling relaxed. The vibrations of the toy are moderate and aren’t strong enough to lead me to climax, but they are strong enough to wake me in an arousing manner and get me ready instantly for some morning action. The Little Rooster isn’t really aiming to be a powerful vibrator. I’m certain some women will find it powerful enough to entice a climax, but I feel that not only would the strength need to go up a few extra notches, but also that the shape of the stem would need altering, to better cup the clitoris.
Occasionally I found that the Little Rooster would dig in while sitting upright at certain angles. The clock face sometimes pushed away from my body too. I feel that the face needs to be slightly smaller, as in some positions it overhangs each side of my pubic mound. I also found that the Little Rooster would cause some underwear to become misshapen permanently – so make sure you don’t wear your favourite briefs or thong.
When cleaning the Little Rooster I’d advise using a damp cloth and antibacterial spray, as it isn’t waterproof. The toy will trap dirt and sweat in its gaps and around the controls, so pay these some extra attention when cleaning the product. Some dirt may become trapped inside the charging port – make sure this is clear before pushing the charging pin inside, as you don’t want to damage the toy.
The toy is charged via USB and has a battery bar indicator on the digital screen. The toy has a decent battery life. I’ve only had to recharge it a few times over a month. 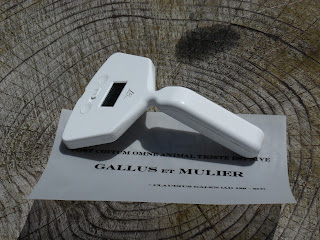 Overall, I like the concept behind the Little Rooster, but I think it needs a little work on its shape and hygiene. There are just too many areas which can trap dirt, which is worrying considering how sweaty you can become during a night’s sleep. Also I would like the tip to be more functional as a toy, so that you are able to immediately use it for pleasurable clitoral stimulation after it has helped raise your arousal in the morning. I’m quite surprised how I was able to sleep comfortably with it, for the most part. Yes, it needs improvements, but I’m certain that these will happen over time. For now it’s an alright little chick, that hopefully will grow into a strutting, crowing rooster, after a bit more development.
Thank you to  Gallus et Mulier for providing me with this product for my review.

Update: Sadly I’m yet to see any improvements to this sex toy. Unfortunity the ABS plastic started to crack a few years back too. It has gone to sex toy heaven now.