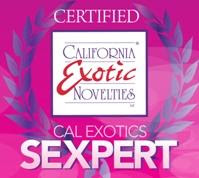 This month California Exotics sent me the Lia Pleaser 1 to review. The Lia Pleaser 1 is a silicone toy. It has a resemblance to a tentacle toy, with ring grooves running down the top and underside of the toy’s ‘sensually, uniquely curved’ body. The toy claims to offer ‘Extreme Power’, so I wondered whether or not it lived up to the packaging claims.
The toy arrives in a clear box with various bits of text printed onto it in a feminine manner. On the back you’ll find a labelled diagram of the toy, pointing out key product features. The Lia Pleaser 1 is a waterproof silicone toy, powered by two AA batteries which are meant to offer 10 extremely powerful functions, controlled via two ‘EZ’ touch buttons. 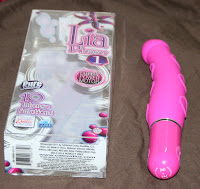 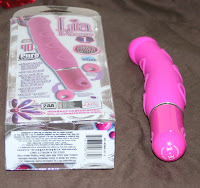 The toy is 9 inches in length with 6.5 inches of insertable shaft. The head of the toy is bulbous with a mild pin-point tip. The shaft gently curves round and slowly expands from a minimum of 3.25 inches to a maximum of 4.75 inches girth. On the toy you’ll find two rows of three raised tentacle sucker-like rings for added stimulation. The toy’s shaft is reasonably flexible, with some plushiness to the shaft, coated with luxury velvet-like silicone. There is a slight manufacturing seam running around the product, which is noticeable during use particularly in the centre of the raised rings. Separating the shaft and the base of the toy is a silver plastic ring, which gives the toy an appearance similar to a luxury branded item. Sadly right at the bottom you’ll find the CE stamp printed in white; I understand that it has to be on the toy, but the high contrast white seems to cheapen the toy’s appearance. The battery cap is a water proof twist lock, with a hole running through it. On the battery cap you’ll find two push buttons, placed on opposite sides. These aren’t positioned in the best place, as the on/off button is where I naturally want to rest my thumb, and the function button is where my index finger would normally lie, meaning that I’d often change settings unintentionally.
The toy’s vibrations are focused mostly at the tip of the toy and don’t travel through the silicone too well. The vibrations are an ok strength and are very buzzy, but I wouldn’t say they offered the ‘extreme power’ the packaging laid claims to. The vibrator is exceptionally loud even when used on its lowest setting.

When using the toy I needed a small amount of additional lubrication, as I found the seamline slightly uncomfortable. However, insertion of the toy was simple, due to its tapered tip and slowly expanding girth. As the bulbous tip entered my vagina I could easily notice the change in size. The first rings, situated on the top and bottom of the toy, both offered noticeable texture play as they rubbed against my vaginal walls. I found I was able to insert more of the toy with ease, and was still able to gain pleasure from the sensations offered by the raised textures. No matter how I tried positioning the toy and which motion I used it in, the shaft wasn’t able to offer any stimulation to either my A-spot or G-spot. I found the vibrations far too weak to induce even a mild orgasm. However, I found the textures pleasurable when I wasn’t being put off by the mild manufacturing mould line.
The toy’s tapered tip works ok for clitoral stimulation, but again, although the vibrations are mostly felt here, they weren’t strong enough for me to orgasm.
When cleaning the toy, make sure you pay a little extra attention while washing around the raised rings, as dirt can get trapped around them. Also, the hole found by the buttons in the base may need additional attention too. Other than that, the silicone can be submerged and cleaned in water with your standard antibacterial wash.
Overall, the Lia Pleaser 1 is a bit of a disappointment. I want to like it, as it does offer some interesting textured sensations, but even these are let down by the manufacturing mould line. It’s a shame, as the silicone really is lovely too. The shape doesn’t really offer much to be desired, and even when backed up with the vibrations I still feel like I’m missing out on something. Due to this, I’m not sure if I’d recommend the LiaPleaser to anyone. You never know though, the shape might be just what you’re looking for.