The LELO Smart Wand Large is a highly powerful rechargeable wand massager. As well as having seven pretty standard style vibration modes, it features innovative SENSETOUCH technology, designed to make the massaging experience feel more lifelike. When you slowly apply the wand’s head to your body, the vibration intensity gradually increases, just like when someone is manually massaging you and the pressure they apply increases as they work out all your muscular knots. Its ergonomic shape also helps you to massage those difficult to reach areas with ease. Its other main feature is that it’s 100% waterproof. I don’t think I’ve found a waterproof wand massager before the release of the LELO Smart Wand series. After testing it out, I’m pleased to report it’s still functional after a very long bath or shower. 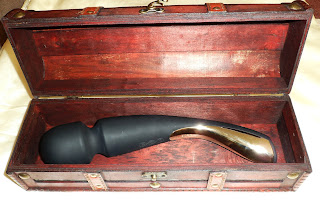 The LELOSmart Wand Large I received came without any packaging as it was a store sample, but I have seen the packaging in a different store and it lives up to LELO’s previous standards, being discreet and elegant. In addition to the standard LELO box – which is in white, rather than the usual black – you will receive a reversible storage pouch, which is large enough for the wand, charger, and a few other little extras, like lube and condoms. The LELO Smart Wand Large arrives with a 9v charger, which is different to all previous LELO chargers, and only compatible with the Smart Wand Large.
The Wand measures 12 inches in length, with a 2.5 inch long head, and an inch long neck connecting that to the main handle. The head is 7.5 inches in circumference; the toy thins around its 5.25 inch neck, and then expands to 6.75 inches when meeting the main body. The device’s neck isn’t as flexible as some, but feels strong, and helps maintain firm control during use. The toy is coated in a seamless silicone, with a rigid interior. There are no gaps in the silicone, apart from at the base where the charging port is located. On the handle you will find a piece of chrome plated glossy plastic, with LELO etched into it. There is a small gap between this and the silicone body, which could trap dirt. As the handle curves, the toy’s circumference decreases, before expanding slightly to provide an ergonomic grip. The toy has an excellent weight distribution, making it easy to hold. The bend in the shaft not only makes it easier to reach certain areas during use, but also helps prevent you from activating the controls accidentally.

Three buttons control the toy’s vibrations. When the toy arrives, it may be in travel lock mode. To activate and deactivate this, press and hold the ‘-’ and ‘+’ buttons simultaneously for a few seconds. There are 8 vibration modes, all of which have the option of customisable intensity. The first setting is a continuous speed vibration; pressing the ‘-’ and ‘+’ adjust its strength. To switch in and out of the SENSETOUCH mode, press and hold the ‘()’ button for a few seconds. Set the maximum intensity you desire via the plus and minus buttons. The SENSETOUCH function increases and decreases the vibrations slowly as the head of the toy comes in contact with your skin. As you pull the toy away from your body vibrations will decrease, and if you press it firmly into your body it will increase in strength. The toy has an additional 7 modes of various pulsations and escalations; you can scan through these by pressing the ‘()’ button. To turn the toy off, press and hold the ‘-’ for a few seconds. The toy will remember the last setting you were on when you next activate it. 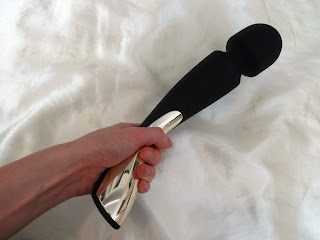 The LELOSmart Wand is designed as an all-over body massager, which can also be used as an intimate foreplay device. When using the product as a general body massager, the touch sensitive vibrations offer a unique experience akin to the pressure of a manual massage from a lover. You are able to set the vibration’s upper limit, so as the head of the toy comes in contact with the skin’s surface, it will slowly increase its intensity to your personal preferred maximum. Thanks to the flexible head, well-balanced body, and bent handle, you are able to apply more precise control than with a straight shaft massage wand. The massage wand’s neck isn’t as flexible as some, but maintains enough flexibility in it for you to easily glide it over your body without losing control, even when rubbing against well lubricated areas. The toy’s vibrations work exceptionally well for deep body massage, and have worked wonders on my muscular knots, which normally can only be remedied by a vigorous, and sometimes painful, manual massage by a third party. Instead the rumbly vibrations quickly, effortlessly, and painlessly shake any aches away. My main qualm is that, when using it on the highest setting for a prolonged area of time, it can cause undesired muscular spasms and numbness – but it’s rare I will need to massage for this long and at this intensity.
When using it as a general massager, I would normally opt for single speed vibrations, set to a medium/high intensity, or go for the SENSETOUCH option. I liked how I was able to control the strength of vibration utilising the SENSETOUCH function, as it meant I didn’t have to worry about fiddling around with buttons constantly when trying to concentrate on massaging a certain spot. To make the experience a little more realistic, you can heat the vibrator’s silicone head in a bowl of warm water for a few minutes. 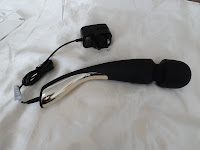 The LELO Smart Wand Large is one of those toys which regularly causes me to experience female ejaculation, so be prepared and have a towel or waterproof sheet handy. If you are a squirter and are worried about cleaning up the wand afterwards, it’s also waterproof. I was very hesitant trying the wand out in the bath due to its seemingly open AC socket, but it has now survived several baths. Not only does this toy produce mesmerizing ripples on par with a high powered jacuzzi, but the water acts as a barrier, softening the vibrations slightly. This means I’m able to experience multiple orgasms in very rapid succession. When using the toy in the bath I was also able to use the toy a few inches away from my body. The vibrations propelled the water into my body, with stimulating bubbles and ripples hitting against my clitoris. Although not as intense as direct contact stimulation, it made for pleasurable foreplay. Other than the charging port being open, my main problem when using it in the bath is how the strength of the orgasms it induces make my legs buck and head rock; I’d advise using a bath pillow or rolled-up towel behind your head for comfort, and as a way to avoid potential concussion.
When placing the vibrator’s head onto a penetrative sex toy, the rumbly vibrations travel deeply down the shaft of most I’ve tried.
Although I haven’t tried this myself, due to the lack of wand attachments, I have read and seen images of the LELO Large Smart Wand being used with various standard sized head attachments effectively.
I have not been able to insert the wand’s head vaginally or anally – nor do I personally recommend it. If you do this, make sure you keep up your kegel exercises, as it could potentially damage and strain your pelvic floor muscles.
Cleaning the wand is effortless. Unlike other wand vibrators, which have lots of nooks and crannies around their neck and head, electrical cords, or air vents on their body, the Lelo Smart Wand has none of these. All you have to worry about is paying some additional attention to the slight gap between the hard chrome-plated plastic, and the open charging port.
A note on charging: make sure the toy’s charging port has completely dried out before plugging it into the mains to charge. Since receiving the wand I’ve hardly needed to charge it, but when it does run out of battery life the vibrator will stop completely dead.

Overall, the LELO Smart Wand Large is almost the perfect wand. I like all the functions available with it, even the SENSETOUCH function. I feel the only improvement LELO could make with this product is to add a silicone cover to the charging port. It’s probably one of the most powerful vibrators I own, and that’s saying something considering it’s rechargeable rather than mains powered. When purchasing the vibrator, although it is powerful, make sure you take into account what type of vibrations you prefer, as this toy emits rumbly vibrations, rather than buzzy. I think LELO have probably produced their best product to date with this wand, and I look forward to seeing whether or not they produce their own range of wand head attachments to go with it – please do!
Thank you to Lovehoney for sending me this Wand Massager for my review. You can find out more about the LELO Smart Wand Large here.