You are here: Home › Uncategorized › LELO Lyla
Being a fan of LELO products due to their high quality and performance, I was very intrigued when they released the new Sensor Motion technology vibrators. The new Insignia Sensor Motion toys work through wireless connection between the toy and the remote. The strength of the vibrations can be controlled by tilting the remote, moving it at different speeds, or using standard pre-programmed vibrations. I must admit, while I like it when an innovative new product is released, I do have some doubts regarding how well it’ll function. Sextoys.co.uk was kind enough to send me the LELO Lyla, which is a wireless remote control love egg, which can double as a bullet. As someone who enjoys using love eggs, but has found the shape of them to feel rather uncomfortable during wear, I was also excited to see whether LELO had put the appropriate thought in when designing the product, and how well it would rest inside the vagina. 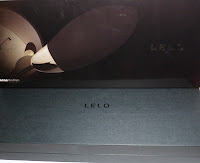 The Lyla arrives in a sophisticated looking black box, with a small amount of product information, a chic image of the product, and the brand name and logo embossed in silver. When opening this box, you will find another box inside which resembles a large black jewellery gift box – perfect for storing the Lyla in, as it’s very discreet. Inside the robust storage box you will find the Lyla, the remote, and a metal brooch, resplendently resting within a velvet tray. I’m a little uncertain as to why a brooch in the shape of the Insignia symbol is provided; it’s a little too small to be functional, other than maybe pinning the drawstring bag up for added security. To the side of the box is a cardboard flap which is concealing the instruction booklet, one year warranty, a ten year guarantee, a small pamphlet of do’s and don’ts, a plastic key, a sachet of LELO lubricant, a satin drawstring pouch, two AAA batteries, and the charger. The storage bag is well made compared to some, and can fit the Lyla, remote, key, brooch, and charger into it.

The Lyla is made from matte silicone that’s beautiful to touch. It doesn’t attract much dirt compared to some silicones, and doesn’t have any manufacturing marks. The Lyla is 3.5 inches in length and has a maximum of 4 inches circumference. It has a slightly tapered tip for easier insertion or clitoral stimulation. At the front of the Lyla there is a bulge which is aimed at stimulating the G-spot, or can be used to massage the vulva. At the base of the silicone body there is a metallic plastic cap with LELO inscribed into it, and a retrieval cord threaded through it. The cap covers the charging port. The toy is waterproof, and the cap feels pretty secure. The remote is a round disc with three buttons embedded into the top: ‘-’, ‘+’, and ‘()’. The ‘+’ and ‘-’ control the intensity of the vibrations and also turn the toy on/off, while the middle button ‘()’ controls the mode selection. The bottom of the remote is made from smooth metallic plastic, and the top half is silicone. At the centre of the bottom half there is a slot, which is to open the battery compartment when used with the plastic key provided. I received the Lyla in black; I chose this colour as I felt that the remote would look less suspicious. 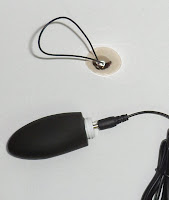 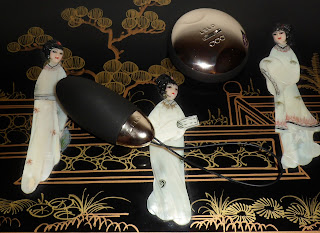 Overall, I like the Lyla, but I really wish you could deactivate the vibrations in the remote during the Sensor Motion modes, as the vibrations can make it difficult to use in public. I understand that you’re able to deactivate the vibrations during the pre-programmed modes, but to me the thing that tears this apart from other love eggs is its unique Sensor Motion functions, which I’d want to enjoy while out. Also, having to quickly scan past the two Senor Motion modes can be a pain. The toy does lose connection every now and again, but it’s similar to other wireless toys. Wireless never seems to function perfectly. It is a fun toy, which offers fairly strong vibrations, and is comfortable to wear.
You can purchase the LELO Lyla from Sextoys.co.uk here.