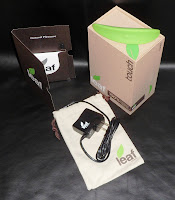 The Touch arrives in a sturdy box that seems rather large, yet with a simple, modern eco-friendly feel to it. There is a small amount of product information on the packaging, and a silhouette of the toy; because of this I feel that it’s not the most discreet packaging. The box is sealed by a magnetic latch. Upon opening the box you find a folder containing the Touch’s instructions, and hiding underneath this are the toy, travel bag, and charger. The drawstring canvas bag is large enough to store the Touch and its charger; this may be better suited to storing the toy, as even though the box is nice, it is very large when compared with the toy. The Touch is 5 inches in length, which is longer than standard clitoral stimulators. The toy’s shape is meant to resemble a leaf, and to me it looks similar to either a green banana or a tropical leaf, due to its curved body and pointed tips. The toy is just over 3½ inches in girth at its thickest point. You will find the motor in the slightly thicker portion of the toy, and the thinner end – which contains the AC port – is meant to act as a contoured handle. Personally I was expecting the thinner portion of the toy to contain the motor, as it just looks like it would offer better pin-point vibrations when used clitorally, but the toy’s curves do fit nicely within the palm of my hand, and I’m able to rest a finger on the raised button with confidence.
The toy is coated in a matte green silicone over a firm body. The Touch isn’t really flexible, but it does have a little plushiness at each tip. The silicone has a manufacturing seam, and there is some texture, due to odd bits of text found embossed onto the toy – this actually helps when gripping the toy while slippery. 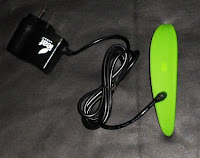 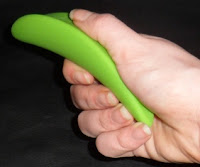 To turn the toy on just hold down the button, and after a few seconds you should start to feel vibrations. The longer you hold down the ‘Press and Hold’ control, the stronger the vibrations will get. The vibrator offers only continuous vibrations, rather than any pre-programmed pattern modes. I actually like how I’m able to hold this button to simply and quickly get to the desired strength. I find a lot of vibrators have too many modes, and I often opt for a single speed mode. The vibrations are a little buzzy, and even though the Touch uses what is known as a ‘Power Bullet’ as its motor, I found the vibrations weren’t as strong as I would’ve liked. The Touch, when at its most powerful, offers moderately strong vibrations. However, I do like how I’m able to have more control when adjusting the vibration strength, when compared to other clitoral stimulators. I found that the motor didn’t irritate my grip, but I would’ve preferred it to be a little closer to the tip of the toy. The vibrations aren’t overly loud, but they also aren’t the quietest. To turn the toy off, simply quickly tap the power button. When using the vibrator you are unable to go back to the lower settings; if you accidentally miss the strength you desired, you have to turn the vibrator off and start over again. Some may find this annoying, but as the toy is relatively easy to use and doesn’t take long to select the strength, I found it didn’t bother me.
During use I found that the Touch was a decent clitoral stimulator. I found that a small amount of water-based lubrication was needed, to reduce the friction caused by the matte silicone. The Touch was extremely easy to control, and thanks to its ergonomic body I found that I didn’t experience any wrist ache during use. Sadly, even when on its highest setting, I found that the Touch took a lot longer than I would’ve liked to bring me to clitoral orgasm. I feel that if the motor was just a touch stronger, then this would make it a lot better at clitoral stimulation. I found that the Touch worked not only as an external vibrator, but also as an internal vibrator. I was able to use the toy to produce shallow vaginal stimulation, and occasional stimulation to my G-spot. The Touch’s surface area isn’t really wide enough to produce strong G-spot stimulation, but if you are someone who likes to mix-up external and internal stimulation, then the Touch works well.
The Touch is also able to be placed externally, curving naturally to sit between the labia, and offering stimulation to the vulva and anus. I was even able to place the Touch within some underpants, where it comfortably rested in place, even while sitting down or doing general chores.
Cleaning the Touch is fairly easy, as the toy is made from silicone and is waterproof. The only area that concerns me when cleaning the Touch is the hole for the AC adaptor; even though it has a waterproof valve, it can still trap a small amount of dirt. To clean, simply use your normal antibacterial wash and water, dry, and then store within the bag provided. 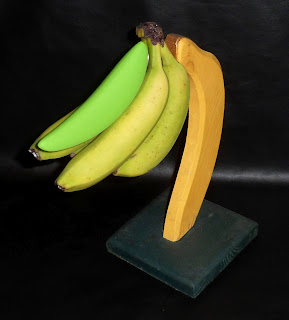