The toy arrives in a clear box with product information printed in various places. There are a lot of functions for this toy, so it feels like there’s a lot going on on the box. The toy has three motors, one being aimed at the G-spot; it has a random function button, an On/Off button, and three rows of non-jamming rotating beads, is waterproof, and made from skin safe materials. On the box, the toy has a lot of promising features, but I wondered how well the three motors would work together.
When removing the toy from the plastic box, I found it resting on a plastic insert. The first thing I noticed about the toy was the smell – rather sweet and fruity. I decided to contact Cal Exotics for more information on the product material, as I know that some materials which smell contain nasties such as phthalates. The vibrator is made from TPE, which is thermoplastic elastomer, and it is phthalate free. The smell does go away after a few washes, but it may put off people who are sensitive to strong scents. The toy is rather large. Due to two motors in the shaft, one powering the rotating beads, and the other a bullet style vibrator positioned on top of the bead chamber, it’s a rather girthy toy. Not only is the main shaft girthy, but the rabbit style clitoral stimulator is rather large, making me wonder whether it’d be too large to actually stimulate my clitoris, as it might sit too high-up on my body. The toy is 9.5 inches in total length, with 4.5 inches of insertable shaft. The clitoral stimulator is 3 inches in length, and there is about 1 inch distance between it and the main shaft. It’s also rather flexible. The rabbit style clitoral stimulator has three protruding prongs, compared to the standard two rabbit ears. I thought this was good, as sometimes the standard rabbit ears can miss my clitoris.

The main shaft has a curved tip which is ideal for the G-spot, which wiggles about when turned on. Lower down the shaft you will find the rotating beads and the added bullet aimed at G-spot stimulation. To me, upon inspection, this extra G-spot bullet is too low down on the shaft to add any extra stimulation to the G-spot. At the tip of the shaft the toy’s girth is approximately 4.5 inches, and lower down the shaft where the beads and bullet are found, the girth is 5.25 inches. I have one major problem with the rotating bead chamber, and that is the material for the chamber casing is too thin and flexible, meaning that I am able to pinch the TPE round the beads, therefore stopping them from rotating. I also found that the bullet positioned on top of this chamber can sometimes be pushed between the beads, and therefore jam them. Not only do the beads get jammed by the material and the bullet, but there is a metal disc above the rotating shaft that I suspect can pierce through the material, if enough pressure is applied. The internal chamber also seems to suffer from a condensation problem. 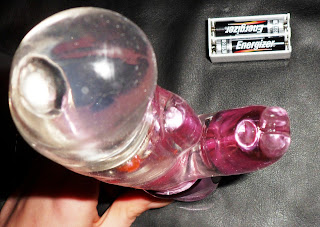 At the bottom of the toy there is a control panel, encased in a metallic coated plastic, which seems to scratch easily. There are a total of five buttons; three for the clitoral stimulator, and two for controlling the main shaft.  Only the clitoral bullet has an actual On/Off function, which makes the packaging slightly misleading. When reading the product information, I assumed the auto-off button would turn the whole toy off. The clitoral bullet has seven functions, including four pulsation and escalation settings. There is also the option of a randomising button. This button is labelled as ‘Hot’. Again I found this misleading, as to me, a button that’s labelled as ‘Hot’ makes me think the toy has a heating function, but it doesn’t. The main shaft has three strength settings, which are controlled by two arrow buttons.  The clitoral bullet’s vibrations range from weak to moderately strong. The bullet isn’t overly loud. The main shaft’s intensity is ok, but I was expecting it to be a little stronger due to the added bullet. The main shaft’s beads make quite a bit of noise, and when the bullet is lightly pressed against the rotating beads, the noise becomes louder. The toy takes four AAA batteries, which it uses up very quickly, and if you leave them inside the toy while turned off, it still seems to drain them. 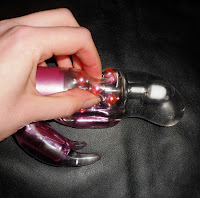 When using the toy I decided to place a condom over it. I found the shape of the tip slid into my vagina easily and the curved tip hit my G-spot. The lower down bullet didn’t hit anywhere near my G-spot, but provided a small amount of stimulation to my vaginal entrance. I found that once the toy was inserted I was able to jam the toy by clenching my pelvic floor muscles. The toy also jammed when I used it in thrusting and rocking motions. For me, this is a big problem; I enjoy thrusting and rocking motions when stimulating my G-spot. Yes, the tip of the shaft does wiggle, but it’s not firm enough to bring me to orgasm. Also, I find that when I get close to orgasm, my pelvic floor muscles with spontaneously spasm, meaning that the toy will stop working in those vital moments before climax. Much to my surprise, the clitoral stimulator did its job quite well, and the addition of an extra ear made it more pleasurable than the standard rabbit. The vibrations weren’t strong enough to bring me to orgasm however.
Cleaning the toy is easy, as it is waterproof. The toy does attract dirt, so it’s best to store it in its box. The material clings to hair, so if you have long hair, be careful not to get the toy tangled up in it.
Overall, the toy does have some promising features, such as the three pronged clitoral stimulator and the curved tip. But because the rotating shaft jams easily, despite its claims, it ends up ruining the whole experience of using the toy. I also found it inconvenient that it eats up batteries so quickly. Personally, I’m not sure if I would recommend this toy. If the beaded chamber was made from less flexible material, I feel it would work, and be a good rabbit. However, I also wonder why the toy’s shaft forms condensation inside it. For me, this just has too many problems, from its overall build quality, to how safe and hygienic it would be in the long run.

You can find this toy on the Cal Exotics website here.