The Hitachi has been around since the 1970s, and this is easily visible through its packaging, appearance, and build. This vibrator is so good, that they obviously haven’t felt the need to alter anything about the product for the past 40 years. The Hitachi is marketed as a general purpose massager rather than an actual sex toy; women have been using massagers to stimulate themselves ever since they were first invented. The massager comes in a white cardboard box; there are several images of a clothed woman using the vibrator very innocently on her body. Within the box you will find the vibrator and a set of instructions. The instructions pin-point areas which can benefit from being massaged by the Hitachi, and all areas stated are rather innocent. The Hitachi is made from a combination of white and blue plastic. It appears very sterile, reminding me of medical equipment. The massager is 12.5 inches in length. There is a power cord leading out of the base, and the cord is approximately 70 inches long. In the main shaft of the Hitachi there is a black power switch, which can be flicked to either a high intensity or a low intensity setting. The switch doesn’t easily change position, so you have no worry of accidentally turning the product off while reaching climax. I’m actually surprised with how comfortable the Hitachi feels to hold, as it’s not what I would normally expect from something so bulky and heavy. At the top of the massager you will find a blue plastic stem, separating the control shaft and the massage head. The stem is fairly flexible and can withstand abusive manipulation without breaking. The rounded head of the toy is made from textured white plastic, which is rather squishy, almost leather-like. The head is 7.5 inches in circumference and 2 inches in length. It’s not really intended for insertion.
To use the Hitachi you will need a power converter, if you are a UK resident. Most companies selling the Hitachi will provide one of these with the Hitachi, and if not you can purchase one here. Plug the Hitachi into the power converter, which should be plugged into your main power outlet. Once the Hitachi is plugged in, just simply flick the control switch. The Hitachi only has two settings; one is classed as low, and the other high. The low setting is extremely powerful by itself, more so than most vibrators’ high settings. If you are new to strong vibrations, I would recommend only using the low setting at first. When I first used the Hitachi I switched it onto the high setting, and was so shocked by how powerful this vibrator was that I actually dropped it. Luckily it’s so sturdy it didn’t break. I’ve now owned the Hitachi for some time, and I must admit it doesn’t come out to play much. I think this is because I actually need to be in the mood for strong vibrations. It does come in handy when I’m very busy and don’t have time for some slow sensual pleasure, especially as this toy can cause me to have a clitoral orgasm while fully clothed. I would recommend putting a duvet or similar between yourself and the massagers head while adjusting to the powerful vibrations. The toy is quite loud, which is expected from such a powerful toy, although unlike some vibrators the noise level doesn’t bother me too much. I think that this is not only due to the amazing orgasm it produces so rapidly, but also due to how smoothly its motor performs. With cheaper and lower quality vibrators, I always find they have this rattling sound, but the Hitachi produces a smooth and consistent buzz. 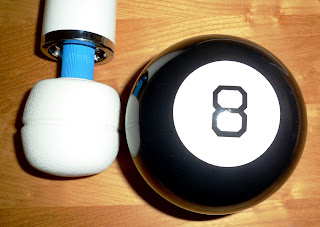 I have tried inserting the Hitachi wand and experienced very little success. I have managed to insert objects of similar proportion vaginally before, after much relaxation, but the Hitachi’s shape and textured plastic just don’t seem to want to fit.  Luckily there are a vast amount of accessories available for the Hitachi, ranging from insertable attachments, to add-ons for variation in texture. If you aren’t able to buy additional attachments for the Hitachi, you can focus the head of the toy onto an already inserted sex toy, and feel the vibrations travel through it.
This may shock some, but I’ve used the Hitachi as an actual muscle massager. It does help relax muscles, and ease away those aches and pains. Also, because it can be used as a general massager, it is a great couples’ toy.
To clean the toy, just use your standard antibacterial wipes or spray. Do not immerse the toy, or get the power cord wet.
Does the Hitachi malfunction, leading to burnt out plug sockets? In the past I’ve read a few accounts where people claim the Hitachi has randomly malfunctioned, or where the power of the toy has caused external wall mounted plug sockets to melt away. I haven’t actually experienced this with my Hitachi, and I’ve enjoyed some pretty long masturbation sessions with it before.
Overall, I like the Hitachi Magic Wand, and wish to experiment with some of its attachments in the future. Even though it’s not used often, I do keep it close to an available plug socket at all times, because you can never tell when you will need one of those powerful orgasms, then, there and now.