Every so often I have a friend who doesn’t own a blog, wanting to write a review. Today my friend Moonshine wishes to share her thoughts on the ‘Beginners Basic Vibrating Finger Bullet from Lovehoney’ 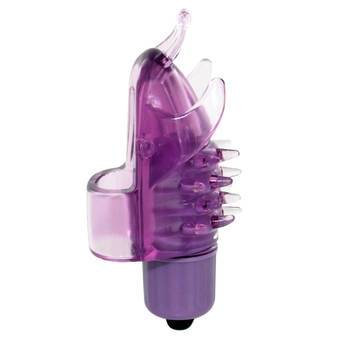 Looking at the image I thought it looked like a strange alien like creature what with its little antennae and wings in a bright purple but don’t let the design put you off this little speedster. This toy was listed in a basics range on the Lovehoney site but that doesn’t in anyway mean it is low quality or not capable of delivering!
As with most toys it was delivered in plain discreet packaging so you can be spared the embarrassment of someone in your home noticing it before you do. The bullet itself was packaged in a foil sachet similar to those you get with condoms that tore open easily, meaning it was kept in great condition on the way to me.
The silicone sleeve on this bullet has two antennae on the top with a pair of little wings and a nubbed body giving three different surfaces which tease the clitoris and is just the right amount of firmness, soft enough to be gentle but with a small amount of pressure it can really make the nubs on it hit the spot. For those people who are more sensitive you will feel every little bump and curve on this making this a favourite toy for the texture of it alone. The finger strap, also made out of silicon gives you more control of the bullet and means that you don’t have to hold it in place like with others which made me feel more involved in my own pleasure with it. Easy to use, you simply press the soft button on the base, press down to enable full vibrations or you can tap for small bursts of vibration to suit your fancy. It is easy to tap on and off but without worry of it being accidentally turned off.
I was unsure which way up this was supposed to work but it turns out that didn’t matter as it works well both ways!
For such a small sex toy I was very impressed with the power of the vibrations that is given which far exceeded my expectations. It is certainly small but mighty, so don’t let the fact that it only has a single speed put you off from trying this out. The strong vibrations combined with the grooves on this have brought me to orgasm in less than two minutes every time I have used it so far and it is really quiet making it a good choice if you are feeling naughty and are in public or you share your home with parents/flatmates and you find it hard to get privacy.
I found this very enjoyable to use by myself but also with my partner making it very versatile in the bedroom for when I feel like I just need a little something extra during sex. The finger holder fitted snugly (without being too tight) on both mine and my partner’s fingers so there was no worry of it slipping off during and it was great for using with positions where other sex toys can get in the way.
A downside for me was the short battery life on this toy at only 30 minutes long but the batteries are reasonably priced and easy to replace meaning if they run out in a heated moment they can be quickly changed without spoiling the mood. I could tell when the batteries in mine began to get low as the vibrations weakened slightly but didn’t fail.
The silicone body means it easily attracts dust and hair which is a pain meaning it needs to be cleaned before each use to ensure it is ready so I found this is best stored in a toy bag to keep it as good as possible but is easy enough to clean using warm water and a small amount of soap.
VERDICT: This fast became one of my favourite toys and will be in regular use for both sex and solo use for delivering a quick and intense orgasm. This is great if you want to introduce toys into the bedroom for the first time or you want to experiment and great value for money.