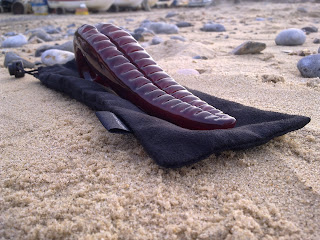 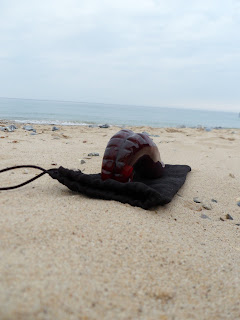 The toy itself is beautiful and not scary at all. The images online don’t really show how striking the crimson swirls in the glass look; this could be because each toy is individualistic due to the way they are crafted. The raised bumps sparkle magnificently; making the toy appear as if it was crafted out of a precious stone such as agate. I gently gripped the handle to inspect the toy more. The handle fitted the contour of my thumb and palm perfectly. Due to the external raised bumps continuing round from the main shaft over the top of the handle; I was able to grip the toy firmly at the desired angle without causing muscular strain. I ran my index finger from the pointed tip to the base of the dildo; each bump and ridge felt original and untainted. I was a little unsure with how the pointed tip of the toy would feel like during play, but after running my fingers over it felt reassuringly smooth. The underside of the toy is smooth with a few manufacturing ripples. Near the tip and on the external side of the handle are small flat patches designed so you could easily put the toy down without it rolling about. I sat the toy down onto a table and even with its steep inclining curve it rested comfortably without falling over.
Inserting the toy was a lot easier than expected and the tip smoothly slid in. I could feel every bump crease the front of the vaginal wall before the tip hit my g-spot. The tip curved over my g-spot as if it was hugging it gently. When using the toy in a thrusting motion I was able to feel a good proportion of the bumps massaging my g-spot and the vaginal entrance; slowly leading to an outstanding orgasm. I later tried the toy in a rocking motions, due to the grip I was able to place the tip directly onto the g-spot causing a strong g-spot orgasm within minutes. I’ve also tried the toy externally by gently massaging the labia and clitoris starting with the tip at the base of the vaginal hole and then sliding it up to the clitoris. The bumps stroked in a relaxing manner while the central groove helped massage the labia and clitoral hood out of the way as the tip moved towards the clitoris.

I’ve also found it a great toy to use while in the bath because of its handle and pointed tip. Sometimes toys can be difficult when using in the bath as the water can have a drying affect. With this toy using the addition of silicone lube seemed unnecessary due to the pointed tip, how it gently curves, and the gradually expanding girth. When using this toy for the first few times within the bath it did appear even more octopus like.
Cleaning the toy is a little harder than some other toys. Normally glass is one of the easiest toys to clean, but with this one I always found certain grooves a little harder. As each toy has individualistic grooves and bumps some people may not experience the same problem.
This toy has very quickly made it into my favourites. I was expecting the ridges to be pleasant as I have other textured glass toys which are enjoyable; but unlike those toys the bumps, grooves, and curves of this toy are far superior and noticeable to my body’s sensitivity. 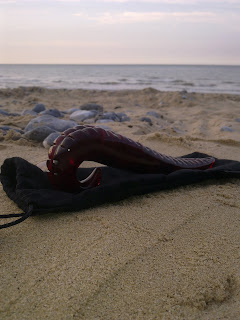 So don’t let the product description of it resembling a tongue or tentacle put you off. Think purely of all those fascinating bumps, grooves, and curves.

You can purchase this toy from Lovehoney