The glass Pony Butt Plug by Glassvibrations is a multifunctional sex toy, which can be used as an anal plug, a fetish role-play device, a tantalizing tickler, a temperature play device, and a vaginal entrance teaser. Personally I’m not into Pony role-play, but this toy is still exceptionally fun to use regardless, and the furls of hair are stunning when poking out between your buttocks.
The toy arrives in a strong white box with a few artfully photographed glass sex toys printed onto it. The top of the box has a rather flimsily fitted plastic window revealing the product behind it – the ponytail of the product hides most of the toy’s details. To avoid any further confusion I’d just like to state that the brand name ‘Glassvibrations’ doesn’t necessarily mean their products vibrate; this plug is a non-vibrating toy. Upon opening the magnetic latch I found the toy resting securely on a padded cushion. A black drawstring storage pouch with toggle button is also provided, tucked away to one side in the box. I gently unfurled the cluster of hair, and exposed the glistening glass to the light. 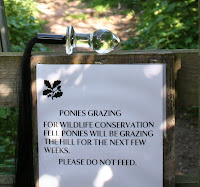 The butt plug is a lot larger than expected, having maximum insertable dimensions of 5 inches of girth, and 3 inches in length. The toy has a stem 2.75 inches in girth and an inch in length, before leading to a bulbous tip, 2 inches long, which tapers off to a rounded point for easy insertion. The plug has a flared base in the form of a disc, making sure it shouldn’t travel inside you during wear. In the centre of the base is a black cylinder of glass sticking out 1.75 inches, which contains the clusters of jet black synthetic horse hair. The tail falls around 26 inches and has a good thickness to it. You may be a wondering why fake horse hair has been used rather than real horse hair. Other than the obvious price difference, I feel that Glassvibrations have made the correct decision by using faux horse hair, as real horse hair stains easily, especially when it has been in contact with human sweat. Considering that the hair will be positioned close to a very intimate area, the tail, if made with real horse hair, would be ruined swiftly. Faux hair is a lot easier to maintain and wash. 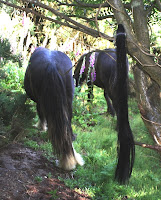 When using the toy anally I was worried about how easy it would be to insert, due to its size, so I made certain that both the toy and I were well lubricated. After positioning the tip against my anal orifice I gently slid its bulbous head inside my body. The contour of the tapering complemented my body well, and I experienced no discomfort during insertion. The head popped easily inside and rested comfortably there. I was almost completely unaware of the toy’s stem, yet the girthier head of the toy gave a nice filling sensation. The tail of the toy bobbed up and down as I moved around, making the toy move slightly, adding to the sensations felt internally. Occasionally the tail would sway against my vulva, heightening my body’s general arousal. Teaming the toy with vaginal insertion made it seem very filling, and made my vaginal walls feel exceptionally tight, which made me experience a G-spot orgasm much quicker than usual. The plug stayed in position despite the spasms of my pelvic floor muscles throughout climax. During general wear I found the toy rested between my buttocks comfortably, but the glass cylinder jutting out of the base made sitting down neigh (sic) on impossible. Personally I would’ve liked to be able to sit down while wearing the plug; however, I did consider that this is an interesting way to exert control over a submissive, via putting more physical limitations on their movements.

When using the toy vaginally, the bulbous head slips into the vaginal entrance easily, offering a gentle popping sensation – which is perfect if you prefer shallow stimulation. However I found the shape wasn’t very good for G-spot stimulation.
The toy works very well for temperature play, as the tapered tip offers a nice gliding sensation when ambled over the body, gently tickling you and projecting either the warming or chilling sensations you personally crave. To chill or heat the toy, simply run the toy under the appropriate tap for a few minutes.
The pony tail can also be used as either a tickler, teasing over your lover’s body, or even as a gentle whip. When used as a whip, the toy works mostly for visual impact rather than physical, due to the softness of the faux hair. When using the toy in either of these manners, the rounded tip fits comfortably within the palm of the hand, offering maximum control.
As the toy is made from nonporous borosilicate glass it is fairly easy to clean – it even states it is dishwasher safe. I’d recommend just washing the glass under warm water with your standard antibacterial cleaner. The difficult part is keeping the tail in good condition, as it will need regular brushing. Also dirt could become trapped inside the black cylinder. You could wash the hair with shampoo and allow it to dry naturally before putting it away. Sadly, eventually the tail will thin, but this is only to be expected. 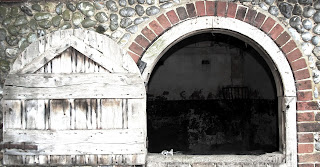 Overall, I really like this Pony Tail Plug by Glassvibrations. I don’t think I’m a pony-play convert, but I can see so many possibilities with this product, it really is a fantastic multifunctional toy. The only thing I’m not keen on in regards to the product is the cylinder of glass sticking out of it preventing me from sitting down, but this really isn’t too much of a problem as long as you are aware of it; I was able to walk and lie down comfortably while wearing it. I would definitely recommend it to anyone who feels they’d be able to cope with the girth of the bulbous head.
Thank you to Sh! Womens Store for providing me with this butt plug for my review.