The Fleshlight Freaks Drac is a male masturbator designed to combine the realistic elements of the female genitals with the serial fictional fantasy features associated with vampirism, particularly animalist bat wings and fang-like internal nodules. Both my partner and I found the Drac bitingly hot, and its sprayed bat-like labia flying away from standard realistic and sometimes intimidating representation of real or porn-star-esque labia into new heights. I’m certain that this would turn most timid creatures of the night into addictive ghouls, or even those who don themselves as princes of darkness will deem this toy worthy enough to be his Dracula bride or concubine. 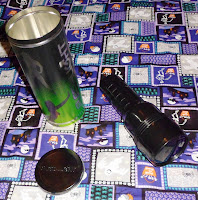 The masturbator’s sleeve is contained within a large gloss plastic ABS case manufactured to look like a flashlight. The glossy plastic is large and weighty, the case has a few manufacturing grooves to help enhance grip, as well as a textured stamp containing printed product information and branding. The Fleshlight is 10 inches in length and 7.75 inches in circumference around the graspable shaft. It flares out towards the lid, making the product a maximum 11.5 inches in circumference .The case completely confines the masturbator’s removable sleeve.  The case is made up of four separate sections: at the top you will find a twist locking lid, once removed you will find the sleeve held into place via a removable plastic ring which grips it firmly into position. You then have the main section of the case which is designed to stop the internal sleeve from flopping around, unlike some masturbators; the standard Fleshlight casing cannot be manipulated via applying various pressure, due to it being made from rigid material. At the bottom of the casing is a removable twist cap, which as you slowly untwist reveals air-vents cut-out of the main cases body. These air-vents help offer a different dimension to your masturbator, meaning you are able to customise the intensity of suction – when these vents are completely uncovered the toy’s overall air circulation increases meaning it produces less resistance and suctions, the more covered the vents are, the more intense the suction and friction will feel as you thrust. 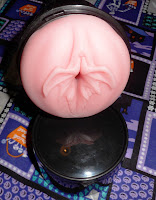 The Fleshlight insert is made from a material called Real Feel SuperSkin which is a porous material made from medical grade polymer plastic which is phthalate-free and latex-free. The material feels a little bit like soft human skin especially after applying a thin dusting of corn starch over its surface, also warming the toy up in a bowl of warm water can increase its lifelike sensations. Fleshlight advise against using silicone lubricants with the material as it may damage the insert. Also it is recommended avoiding soap and alcohol base antibacterial washes when cleaning the item – not only because it may damage the item but also the chemicals from these cleaners can become trapped within the pours which may cause skin irritation upon future use. The material is highly flexible and will flop around when outside of the case; however you can use it without the ABS case, which gives you the option of manipulating the pressure of the insertable textured tube during thrusts. 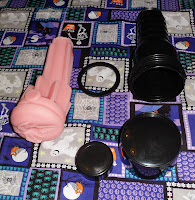 The Dracs sleeve is in the standard pink masturbator colour. The design is based on a hybrid creation between the female genitals and batwings, the mutation makes it look less intimating than some models I’ve seen. The batwings are mounted on a raised bump representing the mons pubis. There are a few light grooves which represent the labia majora. At the bottom of the labia is a small ripple texture which looks similar to the female perineum and at the top of the labia you will find a clitoris-like nub positioned under a clitoral hoods cleft.  The batwing labia have various grooves and textures on them to not only add to the product’s aesthetics, but also to offer some form of stimulation to the penis glans as it penetrates the products orifice. The protruding labia are fixed to the sleeve and do not hang away from the product at all. I think the product would’ve offered more stimulation if the labia hung away from the material as they would’ve rubbed against my partner’s penis’s shaft as he thrusted. The internal texture is a unique design for this particular Fleshlight product and it is referred to as Blood Lust. It consists of two spiralling textures – one being a raised groove and the other a series of teeth-like nodules descending down the internal tunnel. The tunnel isn’t as tight as some of the moulds of Fleshlights available (such as the stamina training models), but also isn’t overly loose. I feel its best suited for the average male masturbator user.
When using the toy with my partner I found the casing very cumbersome and large for my tiny hands to grip, so I let him mostly take the lead. The case can be used hands free if requires through wedging it between a mattress of pillows to help clamp it into position. You also have the option of unscrewing the base and then inserting a vibrator into the bottom of the toy to enhance the product’s stimulation – the soft material dampens vibrations more than some.
When using the product I recommend using a large amount of water base lubrication – unlike some masturbators lubricant doesn’t drip out of the base as easily, so it’s not too messy. 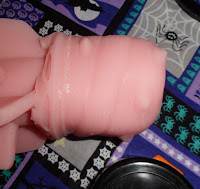 During use my partner applied lubrication to the toy’s entrance as well as the shaft of his penis. As he pushed into the orifice, the bat-like lips stimulated his glans pleasantly. Whilst thrusting back and forth he found the textures stimulating, but not overly different to other Fleshlights he had used in the past. The canal applied a reasonable amount of pressure onto his shaft during play and wasn’t too intense. My partner preferred using the product with maximum suction and resistance. He gained greatest satisfaction when twisting the product counter clockwise to the spiralling textures. This lead to an enjoyable climax quickly. The product’s textures didn’t feel very realistic even after warming the sleeve within warm water prior to use.
Overall, my partner likes the Drac masturbator, but has commented that the sensations it produces aren’t anything spectacular and are similar to more average Fleshlights. However, both my partner and I agree that the external appearance of the labia is interesting and cute, and both prefer it to some of the more realistic presentations. If you particular like vampires and fantasies about vampire nookie, then this Fleshlight is a viable choice.
Thank you to sextoys.co.uk for sending me this product to review. You can find-out more about it here.