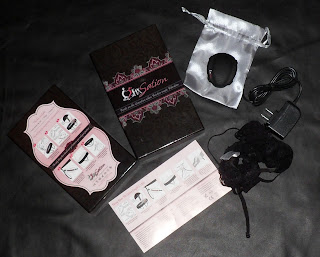 The FixSation come in a rather stylish box. I’m actually rather impressed with the packaging, as it is sturdy, compact, and doesn’t scream ‘Sex Toy’. Inside the box you will find the toy, charger, a satin bag, instructions, and the strap-on lingerie.
The toy is made from a skin-safe material which is smooth and rigid. It is approximately 2 inches by 2 ½ inches, so you might want to check this size would work for you, to stimulate your vulva and clitoris, before purchase. On the back of the toy are three ridges aimed at stimulating the clitoris. The other side features the on/off button, and a row of finer ridges, aimed at stimulating your partner’s body. The toy is rechargeable; before use you are meant to charge the toy for 8 hours, and its charge lasts up to 2 hours. After the initial charge it only requires up to 4 hours charging time. The DC charging port is sealed away behind a protective cover.

The lingerie is similar to a suspender belt, but sadly doesn’t have an adjustable waistband or leg straps. Instead FixSation offers the lingerie in different sizes for optimised comfort. I chose medium as I’m in-between the small and medium sizes; even though the medium seems to fit me, it does feel a little too big. As the elastic is very stretchy, I feel that if you are between sizes – like me – it would probably be best to opt for the size down. The lingerie will wear over time, but luckily you are able to purchase replacements separately. The lingerie is made from a soft elasticised lacy band. There is a fabric tag sewn into the band which is easily removed, and at the front there are two strong elastic ribbons which are meant to be threaded between the legs, and hooked into the back of the band. The toy threads onto these ribbons too, which can be a bit fiddly, so make sure you have checked the instructions and thread the toy through the right way.
There are three vibration intensities. The FixSation doesn’t have any escalation or pulsation modes. To turn the toy on, simply hold down the power button for a few seconds, and once on, the button will light up. The toy starts on a mild vibration setting, with the next setting moderately powerful, and the last fairly strong. The vibrations are rather loud and seem a bit buzzy. To turn the toy off, hold down the power button for a few seconds again. 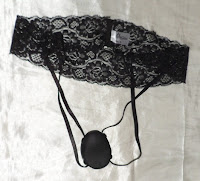 When first trying on the FixSation, I instantly thought that the product wasn’t going to work for me. The toy didn’t want to sit correctly and was hanging away from my body. It took me a few minutes before I realised I had actually put it on back-to-front. Once I had put the toy on the right way round, it rested against my vulva comfortably. To make the toy rest on my clitoris I had to reposition my labia. I’ve tried similar toys before which were aimed at offering hands free clitoral stimulation, but sadly I hadn’t found one which actually stayed in place comfortably. The FixSation surprised me with how comfortable it was to wear, and how the gently contoured body of the toy rested nicely against me. 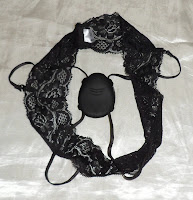 During use, while having penetrative sex with my partner, we found that the toy rested in position perfectly and didn’t get in the way. We did however find that changing the vibration setting during sex was a little difficult; not only because of where the button is positioned, but also due to the amount of pressure you have to apply when pressing the button. We found that the button became even harder to use when lubrication had gotten onto the device. The vibrations did add a little extra to intercourse, but they weren’t the strongest. My partner got no benefit from them. When using the toy during missionary position, the friction between my partner’s body and mine did make the toy move slightly, meaning that I was able to benefit from extra stimulation produced by the raised ridges. However, I did find that every so often the gaps at the side of the toy, where the straps thread through, would occasionally catch my skin and cause mild discomfort, although this wasn’t enough to deem the experience unpleasant.
The FixSation also works well during solo use, whether it is being worn around the house while doing general daily tasks, or being used during solo masturbation alongside an insertable toy.
Cleaning the toy is relatively easy, as it is waterproof as long as the DC port stays covered. I did find that the gaps round the side of the toy were a little fiddly to wash, and that a damp cloth or cotton bud worked best for these. The lingerie can be washed at 30 degrees Celsius, though I would recommend hand washing them, because the straps can become tangled easily. Also, hand washing should help them keep their elasticity for longer.
Overall, I like the FixSation, but do feel that it needs a few improvements. The vibrations are relatively strong, but some may still find them a little too weak for clitoral stimulation. It would also be much more convenient if the vibrations were controlled via a remote. The general fit of the toy is probably one of the best I’ve found, and I appreciate how you are able to purchase the lingerie part separately. This toy makes a nice change from the usual offerings, and works well for couples.
Thank you to MyFixSation for providing me with the FixSation Couples Vibrator to review.