You are here: Home › Uncategorized › Fairy Pocket Mini Massage Wand
I’ve been trying to get my hands on one of the Fairy massagewands for some time, but they weren’t available in the UK. That was until sextoys.co.uk started stocking them, and kindly sent me one to review. I chose the Pocket Mini Fairy, which is a small sized wand with two speed settings, and is powered by a rechargeable battery. Even though I like the power and stimulation area a normal sized wand offers, I’ve found them a bit tricky to work with due to their size and weight, making more direct stimulation to areas such as the clitoris difficult. To be fair, larger wands don’t really need to be precise to make most people orgasm, but I do prefer to have the option for more localised stimulation, and the ability to use other toys, without having to invest in attachments. I have had a few experiences with similar sized wands to the Pocket Mini Fairy but these have been battery powered, so I was eager to see how the strength of the rechargeable compared.

The massager arrives in a small pink box, with silhouettes of fairies printed onto it. On the side you will find pictures of a few of the other wands available from the Fairy Series. You will also find two images of the product’s charging port and light-up feature to show it’s charging. The Pocket Mini is powered by a rechargeable lithium battery, which takes 90 minutes to charge and lasts for approximately 70 minutes.  There isn’t a lot of information about the wand found on the packaging, and what little information there is, is in Japanese. The box is sealed with a foil sticker so you will be able to tell if your product has been tampered with. The toy is resting on a plastic insert; you will also find an optional fabric wrist strap which has ‘Fairy Pocket Mini’ printed on it.
The Wand’s head has a smooth silicone cover, with five grooves running around the bottom of the cover. The silicone cover isn’t removable, and is unlikely to break away from the toy. The main body of the toy is made from a white plastic with a pink fairy printed onto it, the product name, and the brand’s logo. Connecting the main body and the head of the toy is a spring shaft covered with rubber-like material. The spring shaft is fairly flexible, but not as flexible as on some wands I’ve used. It also sometimes makes a slight noise when being moved around. Overall, the toy is built pretty solidly, and is better quality than the mini battery powered wands I’ve tried. There is one problem with the wand, and that’s the charging port; it’s covered by a removable piece of silicone which could easily get lost if you’re not careful. I feel they could’ve made this so it stayed attached to the product while you are charging it, similar to the charging covers found on other electrical devices, where you pull them out and rotate to gain access. The Pocket Mini is very light weight and fits into the palm of the hand easily. Its total length is just less than 6 inches; the head is 1 inch in length, and the flexible spring is ½ an inch long. The circumference of the head is just less than 3.5 inches, which some may feel is a little large for clitoral stimulation, when compared with a bullet vibrator or a pointed tip toy.
The Wand has two vibration intensity settings which are controlled by a sliding switch. It has some texture, making changing the setting easy. Both settings are very strong and quieter than I had expected. The motor is fairly smooth sounding, with only a slight rumbling. I have noticed that the toy does make a slight high pitch electrical screech when turned on; this can also be heard while the toy is charging. 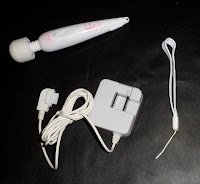 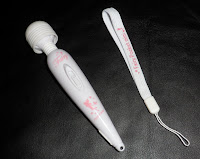 You will need a plug adaptor for a Japanese and USA plug to charge the toy within the UK. The surface of the adaptor needs to be smooth; I know some will have a ring of plastic circling the jack points, but this will get in the way when trying to plug in the AC adaptor provided with the Fairy. Due to this I had to order an appropriate adaptor before I could try out my new toy.

When I was finally able to charge my new massager, I couldn’t wait. I plugged it into the power supply, the bottom of the toy lit up a bluey white colour, and it charged within 90 minutes. Once charged the toy stops glowing. Unlike some rechargeable toys, the Pocket Mini’s vibrations don’t gradually become weaker when it’s running out of charge, the motors just turn off. Simply plug into the charging port and wait 90 minutes, and you’re set to go once again. 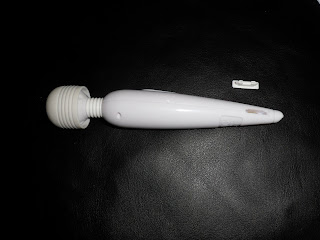 The Fairy Pocket Mini is very powerful considering the size. It’s not as powerful as a mains powered toy, but so far it’s one of the most powerful rechargeable toys I’ve tried. For such a dainty toy, I’m hugely impressed. When holding the toy during use, the vibrations can be felt throughout the whole toy, but unlike some toys they are mainly focused in the head, meaning that the vibrations don’t irritate my grip. I first tested the toy out as a general body massager and found that even though the spring shaft is flexible, it still keeps good control when pressure is applied. The vibrations offered from the Pocket Mini work well at easing away muscular aches. When using the toy for more intimate stimulation, I was able to position the head comfortably onto my clitoris. I found the first vibration setting to be very strong, and it caused me to experience a clitoral orgasm within a few minutes. The first setting works exceedingly well if you want to use the textured grooves as added stimulation, but when massaging the clitoris with the grooves on the higher setting, I found it uncomfortable. The higher setting is perfect for producing those intensely strong orgasms. When using the toy at the maximum setting I found that it only took about 1-2 minutes for me to orgasm, and no additional stimulation was needed.
As the toy isn’t as flexible as some smaller wands, I’m not sure how effective it’ll be when used with a partner during sex. I don’t really want to try mine out during sex, as I’m worried about the spring neck getting damaged.
Cleaning the toy is easy, but be careful, as it isn’t waterproof. Simply get a damp cloth to wipe the head clean, and pay a little extra attention to the indented grooves.  The material that coats the spring neck seems to attract dirt, so you’ll probably want to wipe that down too. 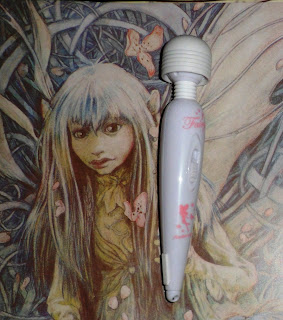 Overall, I’m really glad I finally got my hands on a Fairy Pocket Mini, and will be looking into purchasing more from the Fairy Wand Series. I prefer the compact size and power of the Pocket Mini to my larger mains powered wand, though I doubt it’ll replace it completely. My mains powered wand is much stronger, but I’m now happy to put it away, rather than having it constantly out by a plug socket for emergencies; I’ll now have the Fairy either slipped in my pocket or bag at all times.
You can purchase the Fairy Pocket Mini Massage Wand from Sextoys.co.uk