You are here: Home › Electro › Electric Weekend
I’ve finally woken from my much needed lie-in. I first of all would like to apologise if my writing seems a little sloppy, my brain doesn’t often wake up till 2pm. I just felt that I should write an overview of my weekend.
Well on Friday, I managed to confess to my lover about the latex toy. I was still extremely nervous about what reaction he would give. Would he be angry at me, or angry at himself?  Before telling him I gently informed him that I had something to tell him and was finding it tricky. Yes I’m a massive wimp but I really didn’t want to hurt his feelings. Anyway I just told him that even though I liked the toy I’m unable to use it due to my latex allergy. He instantly chuckled and said you’re rather silly, I thought you were going to tell me something really bad. We basically had a good joke about it and he instantly ordered me something else. I guess I was making a big fuss about nothing? I know it’s only a small story but it has a slight fairy tale ending feel to it… and she lived happily ever after with her new toy the prince gifted her. Maybe that’s just me?
Anyway another thing regarding this lover if that he’s became more experimental sexually recently. Over the weekend I was interested to find out that he has been experimenting with anal play. It’s annoying because part of me want to be around him while he’s being so experimental. Anyway so far his experience with anal play seemed to be going well. He’s a little uncertain about the sensations it produces. This is mainly because he’s new to it, rather than it hurting.  So I’m pleased that his first attempts into the world of anal are going well. That’s enough about my lover for now. There are a few other things I have to mention regarding one of them, but I need to think about it a little more before writing about it all.
I managed to see my partner without him being on a computer at the same time. This was very surprising. He seemed to be finding it very hard to be away from gaming. The conversations mostly consisted of the computer game, which for me was rather dull. Finally there was a break in the conversation as he went to the bathroom. I took this opportunity to fish out some lingerie. I figured that if I didn’t jump at the moment then, I would have to wait maybe another few more weeks.  I decided to wear my new burlesque skirt, slapped on some pasties, and jumped into some ruffle style briefs; time was against me.  He emerged from the bathroom and walked straight past me and sat with his head hung low. This wasn’t the reaction I was hoping for. I gently grabbed his arm and he flopped to his feet. I fell gracefully forward onto him, the ruffles from the skirt fluttered; gently I rested my head on his shoulder and wrapped my arms around him. He was still lifeless, his arms dangling heavily. I buckled my legs back and forth so they hit into his hands, there was a twitch! I moved my head and look into his eyes, he seemed more cheerful and alive. He suddenly smiled naughtily and soon my knickers had been pushed to the side and I was having sex. I was even more delighted that he was willing to give me oral sex after. We used the Sliquid Cherry Vanilla, it delicious and you only seem to need a tiny amount. In the end I think I kept him away from gaming for a good 3or 4hours. I’m still dubious to when I will be next having sex but hopefully it’ll be soon.
So everything seemed to be going well, there were a few things that have gotten me down. I ordered some new toys which arrived yesterday morning. I first opened the smallest package, this happened to be the vibrator my lover picked as a replacement, I’m rather happy with it. Within the second parcel I found the She-Stim electro kit. Now this is the first time I’ve tried an electro toy so instantly had to try it out. As I was unsure about how I react to the sensations I applied two of the pads to my arm, switched it on and scanned through the settings. Electro stimulation seems very different to anything I’ve tried before; it was almost as if my arm had turned into a vibrator. The kit reminds me of one of those make your own circuit kits kids get when learning science. Instead it’s a turn yourself into a human electric circuit kit for adults.  Now I left the heaviest and rattling parcel till last. I knew what it would be so I eagerly opened it. I was disappointed to find that my new She-Stim wave dildo was open, upside down in its packaging, and missing internal packaging. I’m still unhappy about this as it was the last one in stock. It’s clear it had been opened before being sent as the parcel was untouched and didn’t seem damaged. Luckily I’ve been informed that this might be sorted on Monday. Till then it’s sitting in my living room, almost in a teasing manner. I don’t know what can be sorted because it was the last one in stock and the only one I wanted in the She-Stim range. If I send it back I lose out on the toy, and if I keep it I’ve lost out on the online shopping experience. 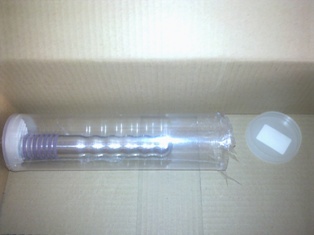 Right now I have one of the craziest desires to have sex while doing house gymnastics. I’m pretty flexible and strong so it may be possible; I just feel that it might make things more interesting position wise. Maybe I should look into getting some door restraints for starters.