The Electrastim Flick is a sex toy which emits electrical current and causes your body to pulsate once connects and or in contact with your flesh – essentially turning you into a vibrator with its electrical charge. The Flick is different to the standard Tens style electric pack, as not only does it have multiple modes of pulsation, escalation, and continuous currents, you can control the current by flicking the control unit up and down (when in the flick mode). There are two models of the flick, one where you are able to connect a single adaptor to its main unit, and the other where you can attach two devices at once, called the Flick Duo. This review will be focusing on the Flick Duo. The Flick Duo gives the wielder to either use one attachment or two at once, or even use two devices connected to it with a partner at the same time.

The added bonus to both the Flick and the Flick Duo, is that they are rechargeable, so you don’t have to worry about batteries. 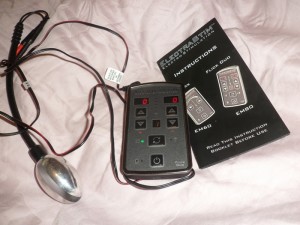 The item arrives in a compact black box with ‘Electra Stim’ printed on it in silver. Inside the box you will find the unit, along with some instructional information, a small drawstring bag, and a pack containing a USB cord for charging as well as a set of electro stimulation pads.

The unit is a simple black and silver box which fits into the palm of a hand nicely. At the bottom of the device is the USB charging port. At the top of the product there are two jack-sockets where you can connect either the pads or an additional device. The Flick Duo has a total of four buttons, an on button, a pattern button, and then two sets of up and down buttons aimed at controlling separate toys or pads. When switching the unit on, there are three LED screens which light-up, as well as a few coloured LEDs.

To use the unit on one of the consistent settings, simply click the up and down buttons which corresponding to the plugged in toy or pads, to the intensity you require. When the LED screen shows ‘0’ the device will not produce any electrical current. To change the currents rhythm to emit various patterns, use the function button to scan through a choice of eight different modes. In each different pattern mode you can also change the intensity of the current to suit you or your partner.

There are a total of 7 functions and 24 intensities as well as the option of 4 different flick modes.

To go into the Flick mode, press and hold down the function button for a few seconds, an LED should light-up green next to an arrow image to indicate that you are now in the Flick mode. Pick the strength of the current you wish to use for each attachment connected, and simply hold the device in your hand then move the unit in a flicking motion. The outputs strength will change depending on how fast or slow you move the unit.

The Flick Duo arrives with two set of square ElectraPads. The pads have a good amount of stick to them, along with lengthy cords. The pads can be used during solo play or partner play. You can use one set of pads at a time or two sets. The unit also allows you the option to use a set of pads in conjunction to one plugged in electra sex toy.

When using the pads I found that I enjoyed using them during partner play more than solo play. I attached a set of pads to my partner close to his groin and positioned the other set onto my body. Every time we made contact, you could feel the electrical current pulse between us. Suring oral sex and kissing the stimulation produced from the device was amazing, as our tongues touched and tingled. During performing blow jobs I was able to feel my partner’s penis throb wildly. To mix things up a bit more I would randomly surprise my lover by using the device while in the ‘Flick’ mode.

I opted for the Tadpole because in the past I’ve used certain electric toys before and found that electric dildos can cause my labia discomfort as conductive metal surface would knock and rub again them during use. With the Tadpole I’m able to insert the egg comfortably into my vagina, as the egg pops inside me the cold metal feels sensational. As the egg travels deeper inside my body, its silicone tail followed behind into my vagina comfortably. With the tadpole I found that the current felt stronger or weaker depending on where it was positioned within my vagina, even at full strength there are a few areas where I would receive very little stimulation – this probably will vary from woman to woman as some responsive nerves and tissue are in different locations. Also I did find a few areas that when the toy ventured into my vagina I felt no sensations at all, it felt a bit like I was exploring the Bermuda triangle. Positioning the egg deep against my cervix and A-spot, the current could be felt powerfully and sent butterfly sensations throughout my womb and stomach. While I found this pleasurable, at times this would be too intense and send the surrounding muscles into uncomfortable spasms.

As the egg isn’t very ergonomic for the female anatomy, it’s just a standard egg shape essentially which works, but isn’t often the best shape when resting onto the G-spot and above the pelvic floor muscles, so I needed to position the product onto my G-spot by pelvic floor clenching and manipulation of the cord. Once in place I was able to switch the device on and experiment with its standard settings. As the continuous settings stimulated my vaginal walls I would feel my vaginal tissue pulse away a rhythmic beats, the slower the setting the slower my body reacted. When using the escalation modes I could feel my bodies reactions speed up as the current hit its peaks. My favourite mode was the pulsation setting as my body would spasm and contract my vaginal muscles away from the device as it pulsed its current, and during every pause I could feel my pelvic floor muscles clench tightly around the egg (sometimes popping it up and down my vaginal canal in a thrusting motion). Not only did I enjoy my bodies reaction during the pulsation modes but also I loved how as my breathing and heart rate heighted during arousal I could also become aware of my hearts reaction, almost as if the eclectic jumpstarted other areas which it wasn’t closely connected to. As the tadpole rested unto my G-spot and stimulated it, I was able to come to a pleasant climax. The experience does feel a bit as if the sensations of lust for pleasure take over your body, almost like I was being possessed by an external force whose focus was devilishly erotic and sensational.

Overall I like the tadpole for vaginal insertion, but it does depend on positioning, which may be a challenge at times depending on how lubricated you are as its weight and sleek design isn’t gravity friendly, and can slip and slide around a lot. Yes its egg shape is easy to insert, it is easy to clean, and it transmits the current perfectly. However the current doesn’t always work due to the natural controls of the female anatomy, and to make this device work you need it to be more ergonomic – fiddling around with it can solve this, but if you have something which slips into place and connects, with the body better it would work a lot better. Women’s vaginas tend to slope one way or another, front or back, and sometimes both. There are also the contours of not only the vaginal walls but also the contours on how the pelvic floor muscles work. The pelvic floor muscles achieve better sustainability when a products ergonomics make the toy lean backwards, but also women desire that G-spot contact too and need a prominent bulge to massage this. Maybe a look at altering the eggs shape would make this toy more successful.

The Tadpole is a great device for women who find electra stimulation too intense within certain regions of their vagina because they can position the connective metals to interact with areas which are more suited to them, unlike when using a longer and more solid Electra device which has a wider contact area. Also if you are a woman who has sensitive labia, you are less likely to catch them with the electric shocks during insertion and thrusting.

The use of the Duo Flick is very fun to use, particularly when in a sub and Dom situation, as you are able to effortlessly control the device with a simple flick of the wrist.

The flick is excellent for partner play, and probably is one of my favourite electric stimulation to use and share with another. The tadpole also offers the option of alfresco play, however the pack would benefit from a clip, to make this easier.

Really other than a few issues with the egg, the unit and functionality of the electrical current are all pretty awesome.

Thank you to ElectraStim for providing me with this item for my review.