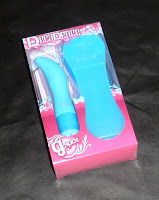 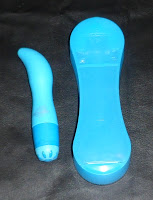 The Decadence comes in two colours, blue or pink: I received the blue, which I rather like. The toy is 4.5 inches in length with 3.25 inches of insertable shaft. It has 2.75 inches of girth at its widest point. The tip is rather small, and doesn’t offer much surface area for stimulating the G-spot. Due to its size I feel that this toy is best suited to foreplay and/or couples play. Also it’s an ideal option for those who prefer smaller insertables. The toy is made from velvet coated plastic, which is safe to use with most lubricants. It feels very smooth to the touch, and causes very little drag when rubbed. I have found one problem with the velvet coating; it can chip, though this doesn’t happen easily. At the base of the toy you will find a dial control, positioned on the battery cap. The dial has bumps on it to make turning it easier, especially when the toy becomes slippery from lubricant. I’m actually impressed with the dial. It’s firm yet easy to control, whereas a lot of dial-controlled sex toys are overly sensitive, and the controls can be knocked easily. The Decadence’s controls aren’t easily knocked, yet I’m still able to select which strength I want, without spending too long fine-tuning. The battery cap is firmly screwed onto the toy, and doesn’t come undone when using the dial control, unlike some toys. When unscrewing the cap I was able to see a thick rubber seal, meaning that I’m confident about submerging the toy underwater, as I doubt it’ll let water in. 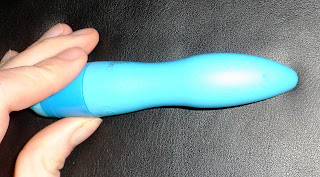 When using the Decadence, I found that I didn’t need any additional lubrication, due to the smoothness of the plastic and its petite size. The tip hooked up into the front of my vaginal wall, but missed my G-spot; if it was a little longer it might’ve worked. I found that the tip worked well for stimulating the vaginal entrance and vulva. Sometimes the toy would be a little tricky to control, and I would accidently jab the tip into my body, causing some discomfort. Even though the base has textured bumps to help you grip the toy, it’s just too small to hold when it becomes lubricated; also meaning that using the toy in rocking and thrusting motions when inserted is nearly impossible. I tried the toy as a clitoral stimulator, the tip was easy to control when stimulating the clitoris, but the vibrations weren’t strong enough to bring me to orgasm. The toys vibrations range from weak to moderate strength, they aren’t rumbly like other lower range toys, but they are louder than you would expect from such a weak sex toy.
The toy works well as a general body massage due to how rigid it is. You can use either the tip to work particular achy areas, or the back of the curve; to glide over the body. This toy is ideal for foreplay or couple play, rather than using for solo masturbation.