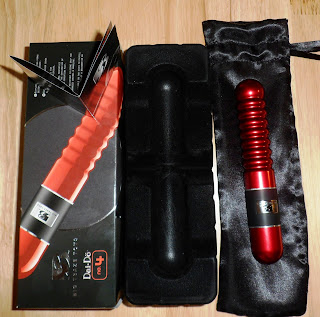 The toy arrives in a glossy black box with an image of the product on the front. On the back of the box you will find an image of the toy, with information about the different materials used in the toy. The toy is 7 inches long and 1.1 inches in diameter. It’s not the widest toy out there, and this made me wonder if the ribs would have much effect when inserted vaginally. The toy is made from an aluminium body with steel trim around the silicone handle, and a steel emblem centred within the handle. The emblem has the Big Teaze Toys logo and name engraved into it. On the box there is even information on how much the toy weighs; the toy weighs 280gms, and even though the toy is mainly made from aluminium, it still weighs more than a plastic toy of similar proportion. After opening the box you find the toy resting on a moulded plastic velvet rest. You will also find a double layered black satin bag with a ribbon tie drawstring. Also found in the box is a miniature catalogue pamphlet. The toy is a beautiful metallic red, which is complemented by the black silicone and silver steel trim. The shining red reminds me oddly of Dorothy’s ruby slippers. There are seven ridges, which obtrude more than they appear to in the smoothly shot product images. The tip of the toy is smoothly rounded off. The aluminium is anodized, which not only means that the toy has a lovely smooth finish, but also that the colouration is less likely to wear. On the base of the toy you will find ‘Dai-Dö no. 4’ etched into the red coating. The silicone grip is approximately 3.5 cm in length; it is comfortable and can easily accommodate more than one finger wrapped round it. The grip does seem to attract dust, so it’s best to store the toy within the satin bag when not in use. There is approximately 4.5 inches of insertable length. Because the shaft is almost straight, without a bulbous base, I would not recommend using this anally. This toy is free from latex, toxic metals, and phthalates.

Using the toy was easy, and added lubricant wasn’t necessary, though as the toy is colder than some toys you may want to add lubricant to act as a heat barrier. The rounded tip gently slid into my vaginal opening, and I could feel each ridge follow as the toy travelled deeper inside me. As the toy warmed to my natural body temperature I was able to enjoy the textures more. I was surprised as I wasn’t expecting much from the ridges, due to the toy having a rather small girth, but the ridges easily and excitably rubbed my vaginal wall. The toy rarely hit my g-spot. I was able to position the toy to a more desirable angle, but it was difficult to keep up g-spot stimulation, unlike with a more curved toy. I found that a thrusting motion was best used with this toy, but as the rounded tip only occasionally stimulated my g-spot, I found that other forms of stimulation were needed to help me reach orgasm. The ridges produced a very different sensation to a spiralled toy, and because of the toy’s weight, my vagina would try to grip and squeeze each ridge as it moved in and out of my vagina.
This toy is great for those wishing to experiment with temperature play as the aluminium heats and cools quickly. I’ve found that the Dai-Dö does seem to conduct heat quicker and reach higher temperatures, when compared with other aluminium toys I own. Due to this I would suggest taking slightly more caution when heating the toy. To heat the toy you only need to run it under a hot tap for a short time; I’ve found that if you hold it under the water too long, the toy can become hotter than the actual flowing water. Cooling the toy is simple; you can either place it within the fridge or freezer, or simply run it under a cold tap.
Cleaning the toy is rather easy. The ridges are easily wiped clean. Just make sure to pay special attention to the steel trim and silicone, as sometimes dirt can become trapped in the gaps between. 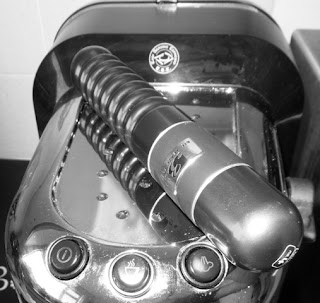 Overall, even though this toy isn’t great for g-spot stimulation, it still is a great textured toy. I think the textures and weight of this toy make it very different to a textured glass, ceramic, or even silicone toy. The textures are easily enjoyed, and the metal makes them flow along the vaginal wall. If you are relatively sensitive to textures this might not be the best toy for you, but there is a gentler version of this toy by Big Teaze, known as the no.3.
You can Purchase the Dai-Dö no. 4 here it’s currently on special offer.