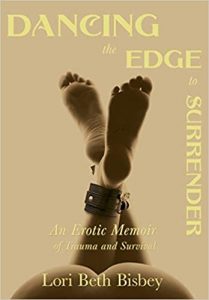 I remember the confusion I was left with on multiple times where abuse has happened to me. At times I wrote about these occurrences, expressing in creative formats to come to terms with it. Yet, echoed throughout each incident, was many saying “nobody wants to read about that”. There’s something about Bisbey’s book that is much needed, as someone who has experienced events that led to trauma, and still witness many within certain sex positive circles being subject to traumatic events and relationships, I want to say the following, “I want to read about it”. I can guarantee that I am not the only one to say this, and I won’t be the last.

Bisbey’s retellings aren’t always of happy accounts, and she addresses traumatic situations she had to fight through. However, rather than responding with “It was horrid, we shouldn’t talk about it”, she explores the areas that many who suffer trauma encounter and told they shouldn’t speak up Bisbey speaks out. There’s everything addressed here, from confusing to finding one’s own accounts of abuse uncomfortably arousing, the fear of victim blaming, to even imposter syndrome from the fear of not being an abuse victim when in fact she is a victim.

She talks about experiences with gaslighting throughout, which Bisbey’s honesty, makes it clear that many of us experience it more than we would like to admit. We need more of this honesty in our lives.

Over the span of Bisbey’s life she eventually found her authentic self and formed a network of relationships that accept her for who she truly is.

What will you get from reading this book: